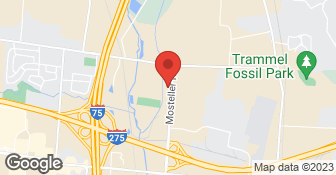 CME Sewer Repair’s goal is to repair and eliminate any pipe issues with minimal disruption to the affected premises. These may be the sewer pipe of a home, the downspouts of an office building or the process lines of a manufacturing plant. CME uses technology and experience to identify the best way to repair the problem while minimizing present and future disruption and costs. Our repair service will be completed quickly and CME will leave the space as clean or cleaner than the way we found it for minimal disruption, during and after the process....

We are a landscape design, installation, and grounds maintenance contractor located in the Greater Cincinnati area. We attribute our success to the high quality workmanship we present. Staying small scale has been our choice, therefore we can present the absolute highest quality work project after project, while staying competitive with pricing. We offer a range of outdoor services, and listed below is just a small list.  …

At Glen Mills Outdoor Solutions, we know choosing a mason is a tough job. We make it easier. Simply pick up the phone and call! We’ll be happy to answer any and all of your questions, and if you are ready to move forward, we can provide a free quote. Glen Mills Outdoor Solutions has been serving the Tri-State area since 2006. And with each new project, whether residential or commercial, we strive to provide professional, timely, service at a fair price. And advice is always free. Family owed & operated. 1-4 employees. No subcontractors used. Cost is determined by the job. Angies List members receive 5% off labor only.  …

Mid Valley Chimney Sweep is based in Franklin, we also serve clients in Center ville and Kettering as well as Butler and Warren Counties specializing in any form of chimney needs you may have including but not limited to. family owned and locally operated. Additional website - www.mid-valleychimney.com.  …

They were very thorough, solved my issue and offered solutions to prevent future issues.

There was water backing up (draining extremely slowly) from a drain in my basement. Another company had tried unsuccessfully to clear it out. They said it probably was tree roots, but they could not get a camera far enough to find out for certain. They told me that they would have to tear up my front yard and maybe my fence, and probably have a big tree cut down, in order to get their equipment in to do the job. I had heard about CME from a couple of sources and called them. They told me that they would try cleaning out the pipe first and what it would cost, then see what else was needed. As it turned out, there was only some soft matter in the pipe, and no roots, and they were able to flush it out easily. The pipes were intact and didn't need lining. The whole process took only about an hour, as I recall. This was two years ago, and I have had no problems since. I felt it was money well spent, and it certainly relieved me that I did not have to have my yard torn up or spend much more money having a tree cut down.

Description of Work
Cleaned out drain from basement to street

After having a sewer backup in the basement of my 90 year old house, I investigated three sewer repair companies that might be able to solve the problem. I decided to hire CME. I must say they provided outstanding service! Everybody was great. After a camera inspection which revealed severe root infestation and deterioration of the original clay pipes, Justin B. did the initial price quote for sewer lining. I asked a lot of questions and Justin went way more than the extra mile to be sure I understood the “whats” and “whys” of trenchless sewer repair. He explained that through the use of CME’s technology, a resin liner would be installed inside the old clay pipes that would prevent any new root infestation and any disastrous collapsing of the aged pipes. The technicians that came for the installation were top notch. Craig, Josh and Opie worked diligently on my system for two full days. They never stopped. They went above and beyond my expectations. After the work was complete, a video was provided to me showing the expertly repaired sewer line that will last for many years. I can’t forget to mention the wonderful office staff. Rachael and Lindsey and others in the office were so accommodating. They called before doing any work, just as promised, and when I called them with questions, they answered me with professionalism and cheerfulness. I am very pleased with CME and am highly recommending CME Services to those that need sewer work.

Waiting on estimate. Was very knowledgeable and helpful.

Quite well. Much less expensive than alternatives. Service done as advertised.

Very well! Crews were thorough, knew their responsibilities in the process and were very professional. They explained the process to us completely and used cameras / video to show us specifically the condition of the 63 year old sewer pipes underground and how the lining would prevent further damage by tree roots.

Description of Work
Repair of main sewer clay pipes and then total lining of pipes.

The men completing the job were very professional and provided excellent services. Justin gave the quote and took time to educate me on my options and what was needed. This team is amazing

Reviews such as yours are shared with our crews. Please know that they appreciate being acknowledged for their professionalism and dedication to customer service. Thank you!! CME Services
3.0

Noticed, in the midsts of one of our coldest winters, the driveway drain wasn't working and water was accumulating. It had never done that before but the lines were replaced since we had a new driveway installed that summer. Since this company was listed for drain cleaning and had a good rating - I called. I was told that they mostly do sewer lines (this fed to the sewer line) but someone would call me that same day. No one called. Had another service come the same day and break up the frozen block of ice in the line. As always - would have at least appreciated a return phone call.

Description of Work
Driveway drain was backed up - wouldn't drain

Follow Up: I spoke with our Sewer Specialist. He assured me that he did leave you a message and provided details of the call from his cell phone. I'm unsure why the message didn't get to you, but again, send our sincere apologies. We try to return all calls as soon as possible. However, unfortunate issues, such as this, do arise from time to time. We understand how troublesome back ups can be. We're just glad someone was able to get there right away to help get your driveway line flowing again. Kind Regards, CME Services Original Response: Sending our sincere apologies. We're looking into this issue and will be sure it's handled appropriately. We very much appreciate you taking the time to let us know. Sincerely, CME Services
5.0

It has been exactly two years since Chuck's crew was out to line my sewer. I have not had any issues with my drain since! I have had some unrelated basement flooding issues, and the water just runs to the floor drain and out through the lined sewer. Not having to worry about tree roots and such anymore has been well worth the investment. I am would recommend every sewer be lined, it is that good of an investment, especially for older homes like mine!

Description of Work
I had a sewer liner installed two years ago.

Our ultimate goal is for the homeowner to never again worry about a back up. We are thrilled that you took the time to let us know that all is well! Thanks so much for the review! CME Services
5.0

Took a couple of trips because was complicated assessment. They were cooperative fitting into my schedule and communicated the issues well.

Thank you for the review! Glad we were able to help! Sincerely, CME Services