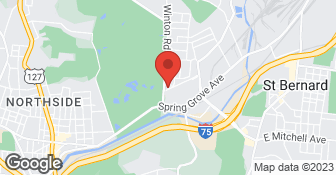 For four generations, the chimney technicians and master masons of Chimney Top Masonry have been building, cleaning and repairing chimneys and other brick and stone structures throughout Cincinnati,Ohio Metro area. Our rates are reasonable and our reputation for excellent customer service is second to none....

They were on time, curtious and very professional. I would recommend them to anyone.

Everything was perfect. We have a lot of plants in our yard and in the area they were working. They did a very good job of keeping damage to a minimum.

Having work done on a chimney is expensive business. This chimney needed a lot of work and this provider quoted it out in several parts and told me he would do whatever I needed. In this case, I was selling the house and didn't want to make a big investment. So I opted for the services above which fit my budget. It allowed to make the chimney functional for the new owner as a gas fireplace only and addressed the biggest issue which was a broken missing flue. I had to follow up a few times, but for the most part there weren't any big delays and the work was done to my satisfaction. I would recommend this provider highly.

Description of Work
Cleaned the chimney, replaced the flue. Painted the firebox and inside of chimney that shows black. Latched flue to pop-top.

I called this company and wanted to know if they could give me an estimate on rebuilding my firebox in my fireplace. They agreed to do this and we agreed on them coming to my home at 7:00 AM on a Wednesday. I stayed home until 7:30 and they were a no show. I headed into work and called them. I asked if there was some sort of miss-communication because they never showed up. They never gave me a reason as to why the no-show but we agreed for them to come out later in the day when my wife would be home. They did make this appointment and left a very fair estimate. They called me the next day and we reviewed the estimate and I agreed to have them do the work. They informed me that they would be out in a week to a week in a half but if it rained it would be delayed by a couple of days. I said this was fine. I never heard back from the company. Update Company called me up after reading my original review and apologized. They said they would be able to come out in the next week and give me 50% off for cleaning the chimney. I agreed to have them come out and do the work we had originally agreed upon which was a complete rebuild of the fire box and cleaning the chimney. They did come out as scheduled however, I was surprised when they left. The original estimate was $840 for a complete rebuild of the firebox and another $150 for cleaning the chimney. Instead of doing a complete rebuild of fire box (back plus both sides) they rebuilt only the back and simply replaced a few bricks on both sides. They also cleaned the chimney. The total bill came to $740. I did not have a problem with the quality of their work but it was not what we had agreed on. The other problem was that when they left the damper was jammed and would not open and close properly. It took me about 45 minutes to fix this on my own. They also told me they would email me an invoice but I never received an invoice. Also, they said if I used them again they would give me 50% off a chimney cleaning. I was supposed to get 50%off for cleaning the chimney this time but do not know if they honored this because again, I never received an invoice.

Showed up very late. Offered to make it up to me by cutting me a break on chimney cleaning (more on that later). But could not do the work that day, because the chimney was supposedly too dirty, and they needed additional tools. Offered to replace cap and quoted price for new one. I cleaned up the cap myself and advised him I did not need a new cap at $500. Price quoted for cleaning was $450, which I thought high, but maybe not out of bounds since we had a chimney fire (contained to the chimney, no smoke odor in house, no collateral damage). I did call him back to double check the price. By then, it was $500. I cannot say what he would have recommended for the chimney in the end, but I'm guessing it would have been a stainless steel liner for serious $$$. I can't say that a liner is not what is needed. But I cleaned the thing myself with brushes and knocked a lot of stuff out. Looking down from the top with a pwerful light, I see no cracks. Again, no smoke odor in house. I replaced the cap myself. The glazed creosote, which is what is expensive and time consuming to clean, presumably burned in the fire. You can't have it both ways. If there is glazed creosote in there, it certainly should have ignited and burned in the chimney fire. If the chimney fire was not hot enough to ignite it, then hard to see how it could have damaged the flue tiles. I anticipated about $250 for a cleaning and camera job, and maybe a surcharge to put the cap back on. Had I gone with this outfit, and followed their recommendations, I would have had at least a $950 bill to replace cap and clean. Can't say he was dishonest, as opposed to just aggressively looking to make some related sales. He did strongly recommend getting the thing camera-d before burning again. I concur. I haven't burned again, despite cleaning the chimney pretty thoroughly with brushes from above and below. But at the end of the day, as I explained to him, I'm not interested in spending several thousand if the flue tiles are still intact. And I'll just stop burning in the fireplace before I install some ultra expensive liner. VERDICT: If you want a routine clean and camera, with perhaps some minor tuck pointing, I don't think this is your guy. He seems more interested in major restoration projects. If you want a new cap and liner and what I hope would be a very thorough cleaning for $1000 +, then maybe these folks are the ones for you. UPDATE: On Easter Sunday, owner of the business contacted me. He felt the review unfairly implied that he was dishonest. After reading it again, I don't agree, but just to be clear, I do not think he was actually dishonest. I do feel he was looking to make related sales, but when I told him I did not want a new cap, he did not push it any further. If I had gone with a new cap and their cleaning rate, I would have spent close to $1000. That's more than I was looking to spend. I don't heat my house with a chimney. Following home sales in my neighborhood, I know many houses that have recently sold do not have a working chimney. Given the choice of an extensive restoration job, whether it be stainless seteel insert or tile restoration, I'm just not going to do it right now. If the business owner posted his response to this review, he would say my chimney was very dirty. Well, yes, it was pretty dirty obviously. Otherwise, $450-500 would be way out of bounds for a cleaning. The guy did spend some time, looked up in the attic at the exposed brick. He took his shoes off when he came in even though my house has dogs, and frankly was under some construction and not spic and span. Since I am responding to the phone call on Easter, I will say the guy apologized quite a bit for being late, and he did try to return on a Saturday, and we had a mis-communication. He left a voicemail Friday evening saying he would return, but I thought I had never received confirmation, and so I was gone when he got there. My bad for that, I guess but if they had shown up on time the first time, we would have been on better terms from the get-go. And they would have made their $450-500 cleaning fee. On price, if you take out the cap issue, maybe his price is in line for cleaning a really dirty chimney. I think the question is, was there still glazed creosote or not? If so, $450-500 is probably fair. Take the "D" for price with a grain of salt. It was more than I wanted to put into the chimney at this point. But showing up extremely late on the first day got us off to a bad start. Also, Angie's list asked me to review these folks. Not the other way around.

B A Klaene and Son Masonry LLC

3 employees. No subs. Cost determined by the job. Free estimates.  …

Chimney Top Masonry is currently rated 4.2 overall out of 5.

Are there any services Chimney Top Masonry does not offer?