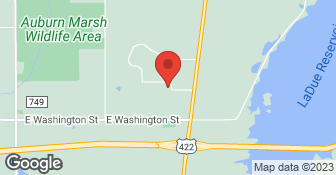 Integrity Lawn Care is a company that was started with one goal in mind: Bring great service and experience with integrity to every customer. We specialize in all of your lawn needs, as well as stone, brick, or concrete patios and retaining walls. Jobs ranging from a simple weeding, to a weekly mowing, to a complete yard overhaul! We'll do it all, all the while the customer never has to be concerned about getting exactly what they want, from an honorable company, at a great price! We enjoy creating computer generated 3D models of major changes in a yard to provide a clear depiction of the work to be done! Estimates and consultations are absolutely free

Description of Work
I hired this company for weekly lawn care. They were paid for 2 months cutting in advance. This company was completely negligent - out of the 8 times the lawn should have been cut, it was done only 4, and we had to phone them repeatedly to get them to show up and cut the lawn. Owner was very personable but completely unreliable.

While I wanted all of the work done in the fall, I stressed to Tyler the importance of getting the area around the sidewalk filled in before the weather turned cold and the ground froze. After making several contacts, the topsoil was installed in November 2013 as it was snowing. I paid Tyler $110 for that work. In March 2014 I contacted Tyler to ask about scheduling the remainder of the work once the weather improved, I was assured by Tyler that I was his "top priority" for the work to be scheduled. After not hearing from Tyler for over a month, I contacted him again on May 5 and was told that he planned to do the work that weekend. He did not show up as scheduled. This set the pattern for Tyler telling me that he would show up and then not appearing. When he finally did show up for the first time, he had to leave immediately to go pick up landscape fabric and a small amount of top soil. Upon returning an hour and a half later, he worked for less than two hours before leaving for the day. After additional multiple contacts, he returned with a small load of topsoil and did some of the work by the septic system but did not complete it. He has not returned nor has he responded to any of my contacts. I notified Tyler that if I did not hear from him with a commitment to complete the project within a week, I would consider the job abandoned by him and look for another contractor to finish the job. That is where it is now. While Tyler is a nice young man, he does not seem to appreciate the importance of follow through and completing a job for a customer. His failure to communicate, commit and complete the work has been very frustrating and stressful. The work I was asking to have done was not extensive but after nine months, it still was not completed (understanding that the work would not be done over the winter). I am very disappointed that Tyler let me down.

Description of Work
It was agreed in September 2013 that Tyler would add topsoil around a new sidewalk and seed area; remove weeds, add topsoil and seed area where a new septic system was installed; replant two decorative grass plants; and level, remove weeds, lay landscape fabric and install medium/large river rocks in an area where an asphalt patio was removed. The total price quoted for the job was $925 ($434 in materials and $491 in labor). The work was not completed.

Description of Work
Tyler was always polite and responsive to communications, but we could not ever sync on expected service levels for lawn service ie consistency and grass removal. I finally decided to change providers after several communication exchanges did not lead to improvement in service level.

Description of Work
I have used Tyler for a few seasons now, and like dealing with him. He is honest, hard working and always cleans up afterwards. His prices are reasonable, he can get the work done reasonably quickly, is very responsive, I usually have him do spring and fall cleanings, mulching (I have about 20 yards each year). I will also have him do other misc work as well.

Great, will use his service the rest of the season. He was very professional and the price was great.

Description of Work
I called , Tyler came over, gave me a quote. He picked a day to mow, and he gave me a great price to mow our lawn. I am very pleased with his service.

He does excellent work and is very reasonable. He is also very dependable and is a very nice person.

Description of Work
He has done landscaping work for 3 homes in our development including our own.

We can take care of all your lawn Irrigation needs. Call today!  …

Give yourself the lawn of your dreams with a hand from your local lawn service experts. For nearly 50 years, Lawn Doctor's experts have been helping homeowners achieve greener, healthier grass. By using superior materials, relying on exclusive equipment, and customizing one-of-a-kind lawn service plans for every client, we give your grass exactly what it needs to thrive. The result? A lush, thick lawn that you and your family will fall in love with. If you're not 100% satisfied, we'll make it right. It's that simple.  …

Insured
All statements concerning insurance, licenses, and bonds are informational only, and are self-reported. Since insurance, licenses and bonds can expire and can be cancelled, homeowners should always check such information for themselves.To find more licensing information for your state, visit our Find Licensing Requirements page.
General Information
Free Estimates
Yes
Eco-Friendly Accreditations
No
Payment Options
Check
Senior Discount
No
Emergency Service
Yes
Warranties
No

The services we provide are described in the Business Description

Integrity Lawn Care is currently rated 3.3 overall out of 5.

No, Integrity Lawn Care does not offer eco-friendly accreditations.

No, Integrity Lawn Care does not offer a senior discount.

No, Integrity Lawn Care does not offer warranties.

Integrity Lawn Care offers the following services: The services we provide are described in the Business Description