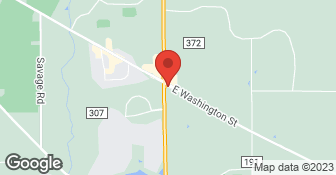 DBA - Custom Remodeling & Design. Owner operated. Located in Chagrin Falls, Cerha Kitchen & Bath has been a trusted and important member of this and the surrounding community. Since establishing his company in 1997, owner Jim Cerha has been serving homeowners in northeast Ohio for almost two decades. At the Cerha Kitchen & Bath Design Studio we specialize in kitchen and bathroom renovations and much more.

We recently contracted with Cerha Kitchen and Bath Design to refurbish our shower and tub area. We found Cerha staff to be professional and friendly from the beginning to the end of the project. When we first walked into the showroom at Cerha, we met two friendly, knowledgable and patient ladies, Christine and Jenny. These ladies looked at some photos we had brought in of our bathroom. Then they helped us select the type of tile and color combination that fit our bathroom. Their suggestions were very helpful and insightful. We were very impressed with them. Two very accomplished craftsmen, Robert and Antoine did the tear down work, the rebuilding and retiling work. These guys did an excellent job and were always on time. They even sent us a text message everyday about thirty minutes before they planned to arrive at our home. At the end of each day, they cleaned their work area and left the house spotless. Jim, the owner, communicated with us throughout the project. He let us know what to expect with each phase of the project and was prompt in answering our questions. We are very satisfied with our new shower and bath area. Cerha will definitely be our preferred vendor for our future projects.

Description of Work
Renovation shower and tub area of bathroom

Cerha did a fantastic job for us. The price was right and fair. The results were even better than imagined. They told us when they were going to be there and were seldom late. We were able to add to the project and they still finished on time. Andrea, our personal designer, did a wonderful job helping us sort through the overwhelming choices and color options. She was always prepared and on time for our appointments. We would definitely work with them again.

Cerha Kitchen & Bath developed an exciting plan, at a reasonable cost for our kitchen remodel. More importantly, they delivered on the project as promised - and then some. Cerha merits my highest recommendation for their integrity, flexibility and workmanship.

They were punctual and professional. Price seemed good, we just decided to put the project on hold.

Description of Work
Had them down to quote a bathroom remodel.

The owner and his crew were very professional, they did a quality job, and they didn't leave behind a mess. However, there were some misunderstandings about what was promised and what was actually done, and the project took longer than expected to complete.

Description of Work
They remodeled our bathroom.

Very well. Professional service and excellent design advice and guidance. Installers were competent and timely. Overall design, cabinets and counter top were via CERHA. We had our own contractor, Meyer Construction of Mentor, for demolition of old kitchen and the electrical, plumbing and drywall work. Whole job from start of demolition to cooking our first meal in the new kitchen took 5.5 weeks.

Description of Work
Make over of master bath.

Description of Work
The experience was among the worst of my entire life. From design to completion it was not run well. The designer designed the kitchen without even speaking to me first and she did not visit the property until I ask. The owner lied about the experience he had with the subcontractors he used for our project. He told me he'd worked with them for years. The main people he had working on the project had only been working with him less than 6 months. The cabinet installer was only with him 6 months. I could write more and more but all I'll say is stay FAR away from this company. I regret the entire project and can't truly enjoy my kitchen because of the horrible memories.

We think Jim Cerha, owner of Cerha Kitchen & Bath, is a very likeable, good salesman with great design ideas. Unfortunately, that?s the only positive thing we can say. Mr. Cerha was hired to remodel the master bathroom in our six-year-old home. We feel the workmanship on the project ? most significantly the walk in shower ? fell far short of what was promised. The job was supposed to take a little over three weeks to complete. It was started on June 11, 2013. It took three attempts, but our shower door was finally measured properly and installed on January 20, 2014. In the first weeks of what turned out to be a 7-month ordeal, we expressed dissatisfaction with the glass tile installation. Mr. Cerha insisted that the work met ?industry standard?. We were unable to find any documentation defining the term industry standard in the context of residential remodeling. In an attempt to resolve our disagreement, experts were brought in to evaluate the work. At their suggestion, Mr. Cerha agreed to remove the tile in question and then arranged to have it re-installed by a professional tile setter. We believe Mr. Cerha did not spend an appropriate amount of time supervising his workers. It is our opinion that the job was not properly staffed and was plagued by miscommunication and misunderstanding. On numerous days, we waited at home for workers who didn?t arrive on time and/or failed to keep scheduled appointments. Based on the work performed, it is our conclusion that: The workers were not qualified to install glass tile and rushed to complete the project in the original three-week timeframe. As a result, they became careless and the finished product was substandard. We never heard Mr. Cerha take responsibility or offer an apology for the shoddy work.

Description of Work
Jim Cerha was hired to remodel a master bathroom.

Quality work the first time! I will take the time needed to make sure it is perfect. We have 11 years combined experience and the dedication to get the job done right! Specializing in remodeling services; We guarantee your satisfaction, and we won't leave until the job is done right. We pride ourselves on the quality work we provide, while delivering great customer service! Call or click for your FREE estimate today!  …

Best "Angie" service award winner for two years in a row (2019 and 2020)!! , the former name was "Angie's List", now it's "Angie". Our website is - www.greenandcleanhomeservices.com our phone number is - 216-446-2626 Toll Free: (888) 886-4305 Emergency - 216-312-6371 COVID-19 Update- All of our staff and technicians have received the Covid-19 vaccine. WE ARE UP AND RUNNING DURING THE CORONAVIRUS (COVID-19), WE TAKE ALL THE PRECAUTIONS NECESSARY SO YOU CAN TRUST US AND FEEL COMFORTABLE WITH OUR SERVICES- - All our staff and technicians took the COVID-19 vaccine! - Our technicians maintain social distancing regulations, as defined by the Centers for Disease Control, on and off duty. - Our technicians wear face masks, gloves, and shoe covers while in your home. - Our employees will wipe down all surfaces they were in contact with. - Our employees will sanitize our equipment before and after each job and wash their hands regularly. Green and Clean Home Services is a one-stop-shop for air duct and vent cleaning, dryer vent cleaning, chimney sweep (chimney & fireplace cleaning), chimney & fireplace inspection, chimney & fireplace repairs, chimney cap installation, carpet cleaning, and upholstery cleaning. We found that top-notch customer service and uncompromising quality of service are an absolute necessity for true customer satisfaction. We look forward to building long-term relationships with our clients and guaranteeing your satisfaction! Click on the link below- this is the link to our youtube channel, with all our videos. Enjoy! https://www.youtube.com/channel/UCNIZQ8knp5yT3MmYqQz6e9A  …

Bonded
Insured
All statements concerning insurance, licenses, and bonds are informational only, and are self-reported. Since insurance, licenses and bonds can expire and can be cancelled, homeowners should always check such information for themselves.To find more licensing information for your state, visit our Find Licensing Requirements page.
General Information
Free Estimates
Yes
Eco-Friendly Accreditations
No
Payment Options
Visa, MasterCard, Check, Financing
Warranties
No

Cerha Kitchen & Bath is currently rated 4.5 overall out of 5.

No, Cerha Kitchen & Bath does not offer eco-friendly accreditations.

No, Cerha Kitchen & Bath does not offer warranties.