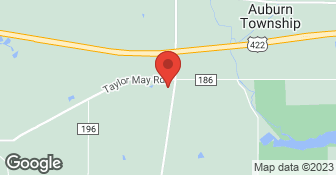 They were difficult to schedule and get on the phone. Lots of "maybe next week we can come out." We and our landscaper had to put pressure on them to get them to eventually come out and do the work we agreed and paid to have done. They worked sporadically and it took longer than we had hoped. We had to fight with them to come back out and install the wire support for the gate (it wouldn't open and close). They were also supposed to install a second gate. We had agreed to a price and a plan. After 6 months of calling, we still never heard back from them. This spring after closer inspection (and getting a dog) we found that Auburn had forgotten to nail in several boards in the fence. This has left places for the dog to sneak through and caused warping in other places. We've had to hire a carpenter to come out and do the repair work because no one at Auburn responds to phone calls.

Description of Work
We renovated our home last year and needed a fence installed. We wanted a 6ft fence across the back of the property as well as a picket fence on the other sides.

They are economical and very professional, they know what they are doing. They are not very punctual however, and you have to call them several times. But other than that they are very good and I would use them again.

Description of Work
Auburn Fence came out about two months ago to help me install a poster and rail that I had bought.

They do a great job. They came out and built my fence and it looks great! The price was reasonable and I would abolutely use them again.

Description of Work
Built fence at back of property

They installed our fence about 15 years ago. Their price is good (even though I don't remember what we paid) and I have been very happy with the outcome. They did a good quality job. Ours has held up really well! They will come out and do repairs when needed. I would highly recommend them.

I had Auburn Fence provide an estimate for a backyard fence. I liked the fence they installed for a friend so I almost did not call another company for a quote. I want it to be known, that I thought they did a nice, quality job for my friend. Their price was competitive with the company I chose to use, but the responsiveness was not what I expected. They were on time for the estimate on a Monday and I was told I would have a quote midweek. I understand things get busy, but when I did not hear anything by the following Monday, I phoned. I was told I would hear back when the quote would be forthcoming. I received the quote 2 days later. They were beat out by a contractor that was more responsive and more professional.

Company was responsive throughout process, showing up promptly as promised to view property for quotation, and then performing the work promptly, neatly, and completely as promised. This was not a big fencing job, but he treated us as if we were important.

Description of Work
Combination of 6 foot high Board on Board fence and 3 rail with wire fence to enclose back yard.

THE QUALITY OF THEIR WORK WAS FINE. THE PROBLEM WAS WITH GETTING THEM TO COME OUT AND DO THE JOB. THERE WERE SEVERAL OCCASIONS WHEN I WAS TOLD THEY WOULD BE COMING TO DO THE REPAIRS, BUT THEY DID NOT SHOW UP. THEY FINALLY COMPLETED THE JOB ABOUT 4 MONTHS AFTER IT WAS ORIGINALLY SUPPOSED TO BE DONE. THEY ALSO DAMAGED A SPRINKLER PIPE.

INSTALLED A SOLID BOARD FENCE 40 YEARS AGO. THIS SAYS SOMETHING ABOUT THE QUALITY OF THE FENCE. THEY DID A GREAT JOB AGAIN. I HIGHLY RECOMMEND THEM.

My father and I started the business. We have worked for regal fence, the token brothers, and Great Lakes fencing. Our prices won't be beat considering we do the jobs ourself. We can do aluminum, vinyl, wood shadow box and solid with swoop or without. Estimates are free we will always work with you for you're 100% satisfaction. We also do drywall hanging and finishing.  …

Since our founding in 2018, our goal has been to build better fences. We continually source better products and methods to produce the finest fencing possible. We want you to have a great fence as well a fantastic home improvement experience.  …

Bonded
Insured
All statements concerning insurance, licenses, and bonds are informational only, and are self-reported. Since insurance, licenses and bonds can expire and can be cancelled, homeowners should always check such information for themselves.To find more licensing information for your state, visit our Find Licensing Requirements page.
General Information
Free Estimates
Ask for details
Eco-Friendly Accreditations
No
Payment Options
Check, Visa, MasterCard
Senior Discount
No
Warranties
No

Auburn Fence Corp is currently rated 4.4 overall out of 5.

No, Auburn Fence Corp does not offer free project estimates.

No, Auburn Fence Corp does not offer eco-friendly accreditations.

No, Auburn Fence Corp does not offer a senior discount.

No, Auburn Fence Corp does not offer warranties.