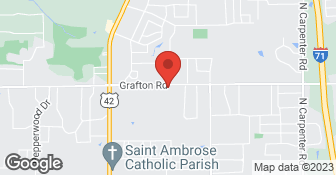 Since the original roof replacement, every time we've had a problem, they are so willing to come out and complete the repairs. For instance, a few months afterwards, we had discovered some water damage in the sunroom and living room. They ended up coming to check all the seals and the flashing. They then even repainted all the ceilings, which we hadn't even asked for! (20 feet high!) They even checked the crawls space and the attic for the water damage. They work with our insurance company and were so cooperative with us! They are so excellent! They always go above and beyond what you expect. It is always a pleasure working with them!

Description of Work
They replaced a roof and some siding, which was damaged by hail.

I worked primarily with Randy Abbott and a salesman. They were both very professional and Randy Abbott was very knowledgeable about all aspects of replacing the roof and gutters. I was impressed that he personally showed up several times throughout the replacement to check on the progress. Abbott Brothers exceeded my expectations and they were a pleasure to work with! They made the process easy and were eager to answer any questions. I could tell that they took pride in the work they performed and genuinely cared about us and our satisfaction. I will absolutely be referring Abbott Brothers to my friends and neighbors!

Description of Work
Abbott Brothers tore off and replaced the whole roof, and they replaced all the gutters and downspouts.

Their sales guy Joe offered to go up on our roof for free to inspect for any damage and if he saw hail damage, he would email the photo's back to us. We had hail damage. The next step in the process was for us to call our insurance company and ask for an inspection of the roof. Abbott Brothers offers to be there and meet the inspector and go up on the roof with him/her to look at the damage. I considered this a plus since I am no roof expert and it's hard to know what is standard protocol for fixing roofs that are mostly damaged but not 100%. We originally got an offer from our insurance company that only covered about 50% to 60% of the roof. This seemed odd to me in that it would be very hard to match old shingles. The estimate was poorly written and hard to understand. Joe rewrote the estimate for Abbott to replace the roof and used the same format that he was familiar with our insurance company using since this time they had used a subcontractor instead of any employee. We had to fight with our insurance company but ultimately got them to pay a claim to replace the entire roof. Abbott Brothers worked off the claim we received. They were helpful in providing samples and websites to pick a shingle color. The week of the job, the owner of the company, Randy Abbott came to our house and asked if we had any questions or concerns about the job or roof leaks, etc. This inspired confidence that even though they have multiple crews working on several homes at once, the owner took a personal interest in the job. The weather was turning cold but they were able to get our job done before winter came. Both the owners and the salesman were very responsive to emails and phone calls we had along the way in the process. It's hard to make a total judgemen on the quality because we won't know for certain until some time has passed, but we are happy so far with the work.

Description of Work
Roof was damaged in hail storm. Abbott Brothers tore off the entire old roof and replaced the whole roof.

As a multiple year Super Service Award Winner, we offer interior & exterior painting services (residential & commercial) in Northeast Ohio including the Cleveland and Akron areas. Along with providing high quality workmanship, we work hard to deliver exceptional customer service and responsive communication with every project. We offer free estimates and accept all major credit cards. We typically do not require any upfront payment for projects less than $3,000. We appreciate the opportunity to earn your business! Note: Due to the structuring of our crews and production scheduling, we have a minimum project size of $1,500 for exterior projects and $750 for interior projects.  …

I have been in business for 25 years. I do interior painting, wall paper hanging, wall covering removal, along with light wall repair. I am a graduate of the Vermont School of Professional Paper Hanging. I service Cuyahoga, Lorain, Medina, Guaga, Lake and Portage Counties. I offer senior discounts. I am insured and offer free estimates and advice. When you call you will deal only with myself.  …

Abbott Brothers Contracting, LLC is currently rated 4.7 overall out of 5.

No, Abbott Brothers Contracting, LLC does not offer eco-friendly accreditations.

No, Abbott Brothers Contracting, LLC does not offer a senior discount.