With Angi since November 2000 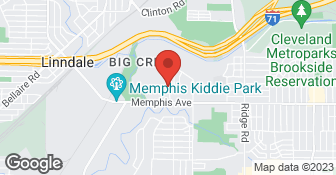 Bill Jackson Roofing is Ohio’s premier roofing contractor. We perform a variety of services including roofing, gutter installation and attic insulation. If you are looking for a roofing contractor for life then you came to the right place. We will make appointments on time because we understand your time is valuable. Let Bill Jackson Roofing Inc., and our 19 years of service perform the quality work you deserve at a fair price. For your convenience you can schedule an appointment below or feel free to call and schedule with our office manager Stacy. I hope our website was easy to maneuver around on and has the information you expected. If you would like us to change or add anything on our site to better serve you your feedback would be much appreciated. We show up when scheduled and perform the work contracted to do.  …

JMD Hardwood Floors offers a detailed and clean sanding process with stunning finishes at competitive rates. With over five years in the hardwood flooring industry and after having the opportunity to learn and train under professionals with 25+ years experience, we are confident that we can address the needs of your hardwood flooring project. We pride ourselves on the line of communication between us and the customer throughout the process, start to finish, from letting you know the early sanding phases up to putting down color samples and getting a customized look for your home. The majority of our projects come from referrals from previous jobs and word of mouth, something we really appreciate. Contact us to discuss your project, and we'd be happy to take a look at your hardwood floors and provide a free estimate.  …

It took over a year to complete. The original contractor hung the cabinets w/o allowing room for wood trim. Instead he used a furniture tape and painted it the wrong color along with the tops of all the cabinets. Two walls were removed and he drywalled improperly but Lowes finds it acceptable? Originally the designer and contractor came out to measure. I asked them out a second time to be sure there would be no surprises with the electrical. He installed two plugs not in code anyway. Lowes did have that done over. A section of counter space was measured wrong resulting in a cabinet I paid extra for was moved against a wall and a sheet was ordered twice for them to glue on the outer part of the cheaper cabinet. No reimbursement there. It was explained to me there would be oversight after every job. There was none. After the job started three months late, one guy worked for week and a couple of days then I didn't see anyone for a month. I asked for an inspector to come out after a few weeks of no work. I asked that the inspector take the contractor off my job because he yelled at me and was very rude when I asked him to do the electrical properly. When work resumed, they sent in the same contractor. He would not lower the cabinets that were not hung properly. He just continued on without fixing them and Lowes let it go. He put most handles on crooked. He was paid in full before the job so he had no incentive to do my job which is not the way it was supposed to go.. Finally they bring in a new contractor but unfortunately he made an error in judgement in the placement of cabinet door. It took twice as long to fix that problem because the designer ordered the wrong size twice. Otherwise he did much better job. The whole job was a year plus of mistakes made from the beginning. Lowe's takes your money up front so you have no recourse except to wait it out. They threw in a paint job for my trouble then when asked if I wanted a wall tiled, I said sure. I was given a call about two weeks later with the estimate for the wall, they included a minimum service charge for the job after I have already spent over $20,000 in that store and had been waiting months to have my kitchen finished. They ended up throwing in the wall because I wasn't about to pay for it. I wanted an extended warrantee for the furniture tape instead of wood trim above my cabinets. Will it last is my issue? Lowe's never addressed the fact that he also painted on all the cabinets while painting that tape. The walls improperly drywalled but acceptable to Lowe's I can only hope they are right because they won't extend a warrantee for that mistake either. I tried to give you the good and the bad but I will never use Lowe's again. This review would be much much longer if I reported all the ridiculous incompetency that occurred over the year plus it took them to finish.

We did a lot of shopping and comparison and they certainly have the best pricing, plus we have their card so we got zero financing for six months. With a good price, plus that, it’s like okay we can do this. We just bought our dishwasher. We’ll see how that goes.

Description of Work
We bought a washer and dryer last fall.

Still waiting for the scroll for top of drive way gate. My husband made many calls and was told it will be dropped off. Still waiting since mid April. Also no gravel was put in pole holes so needless to say we have bags of gravel in the garage.

Only issue was delivery of materials was scheduled for day before but some snafu occurred. However, the materials were delivered first thing next day in time for installation.

I have experience with Lowe's contracting services in Las Vegas, NV. I met with them in their Lowe's office and I had the work done in Las Vegas, NV. The local Lowe's called the Lowe's in NV and they sent a contractor to my rental in North Las Vegas to fix the doors. What I asked them for was to go repair whatever was broken and look for other things that are in need of repair. They told me the locking system for the garage door needed to be repaired and it would be in my best interest to just put in a new garage door instead of fixing the one I had. I agreed to that. They get an A+ for explaining what they were doing to the tenant.

Description of Work
They replaced the garage door of a rental property that I have in Las Vegas, NV.

I have continually been satisfied with Lowe's and I believe they have improved their services over the years. Using them for large projects such as my recent fence installation was a good choice for me.They kept in contact regularly by phone and completed the job when promised/as promised.

Description of Work
Installation of a chain link fence

Amount of calls from Lowes/installers is a little crazy (5 calls from time doors were ordered to the time they were installed, lowes will call to just let you know that the installer will be calling). Order time for the doors was as expected and installers were on time and really friendly. Biggest issue was with a large scratch in the screen door that now requires the door manufacturer come out to fix, since Lowes & their installers don't handle "warranty" work... even though it was an issue on the door prior to it even being installed.

Description of Work
They removed old counter tops and installed new ones, new sink and faucet

It seems that every time I visit Brooklyn Lowe's I have a good experience! I went to the paint department to get some samples of colors, ask some questions, and get price information. I spoke with two employees and both were very helpful. All of my questions were answered, and I was able to take color sample swatches home to see how it looks in the specific room lighting. I will definitely be back soon to purchase supplies!

Description of Work
I visited the Brooklyn Lowe's to get information and ideas for a painting project. I did not purchase at this time, but got very helpful information!

I have been very satisfied with them and have no complaints about them.

Description of Work
We purchased our counter top and sink, cabinet, and faucet.. We also had them install it for us as well.