Landscaping
Lawn Irrigation
Lighting
Lawn and Yard Work
Lawn Fertilization & Treatment
Decks and Porches
Licensing
Bonded
All statements concerning insurance, licenses, and bonds are informational only, and are self-reported. Since insurance, licenses and bonds can expire and can be cancelled, homeowners should always check such information for themselves. To find more licensing information for your state, visit our Find Licensing Requirements page.
Business Details 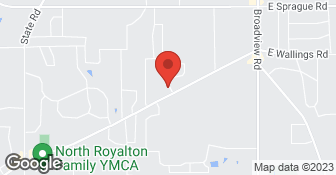 We service all underground lawn sprinklers . SINCE 1978.

To add to the issues the lawn instillation was poor at best and 4 years later the lawn still hasn't grown in well.

DESCRIPTION OF WORK
We hired him to regrade our back yard, install sprinkler systems, and plant our new lawn. He was beyond late with EVERYTHING and our job took around 2 months to complete. About a month after starting I received a knock at our door around 8:00 pm from a man who had delivered the fill dirt for our yard, John had never paid him and wouldn't answer his calls. Since I had never met this gentlemen I did not give him any money but assured him I would contact John. My husband and I asked John several times if he had paid for the dirt and he assured us it had been taken care of, yet with no proof. We then received a letter from the fill dirt company stating that if we did not pay for the dirt they would place a lien on our home. We ended up paying him directly and taking the money out of Empire's final bill. When we explained why John became very agitated with my husband. I would NEVER use him or recommend to anyone.

DESCRIPTION OF WORK
Hi i just wanted to say empire landscaping is amazing! all the work they do is so pristine. Also the price he gave me for all the work that he has done was just so within budget for me. My wife and i had called john to our house for quite a few things. At first we weren't so interested in fixing up our house and weren't sure about putting all kinds of money in to our yard. But After john the owner of empire landscaping came out to give us a free estimate we were very excited to start on this project. We had him Rip out our old deck and put in a new one. he also sold us on a beautiful waterfall and pond that was a present for my wife. He also threw in beds and plant material around it for nothing!!! i just thought it was to good to be true but it wasn't with empire! After completing the job he done he re-mulched all of our existing bed for free and threw in some pine tress going down our property line! I just thought that was amazing! Communication with empire was also very good! Over all it was well worth the money! Thank you empire for all your help and the good work i will call again if i need anything!  Oh also he comes by every now and then to cut our lawn for free of charge and he checks up on his work! He is a awesome business man!

During the whole project, he was never on time, promised to show up on certain days and never showed, didn't call, didn't explain anything.  The job is still not finished.  He promised to come back in the Spring to fix anything that wasn't right.  Never came back.  He takes your money and then moves on to the next job.  He was supposed to come back and finish the fence, re-level the sunken areas i...

Hi [member name removed] first off i would just like to comment on your complaints. You hired our company due to all the previous work that my company has completed in your devilment. You fell in love with all my beautiful work that was put into all the houses around you. So you have seen my work first hand before your job and even after your job because i did work your neighbor too. And due to th...
1.0

I gave him a deposit of about $1,500 to do this work. He never completed any of it and took off with my money. When I went to track him down with the address he gave me I found the house abandoned. I also found out that he had a bad reputation for this type of thing. I would not use him again and would certainly not recommend him to others. He tried to act sincere and even wrote me a certified let...

DESCRIPTION OF WORK
I hired this company to do landscape design and installation. They were going to put in a new irrigation system, lighting as well as plants and shrubbery for the front and back yard.

Dear (Member name removed), You had $1,500 just in clock work, Pluming, wiring, and a rain sensor, and labor. So i did do plenty of work in the house. When we did the pluming in your basement next to the fish tank and the pool table is where the work was performed. And i was just wondering did i take off with your money before or after i gave you all those 5 pound lobster tails and the fish? When ...