With Angi since January 2017 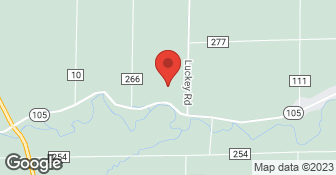 We complete exterior work only (No need to enter home)
We will wear masks and gloves when we visit your home
We will sanitize the workspace and all areas touched
We accept remote payment
All statements concerning COVID‑19 business operations and essential services are informational only, and are self‑reported and not verified by Angi.

Deck Medic of Toledo provides deck, dock, fence and outdoor furniture restoration services in the Toledo, OH area. Our five-step restoration process is guaranteed to transform your worn wood features into bright, attractive focal points on your property. You can rely on our experienced team to power wash, repair and stain all kinds of wood structures, from your boat dock to your fence.  …

I paid Mr. Phomalee $1275 to do some bathroom remodeling work that he'd initially stated he'd be able to begin between Christmas and New Years this past December. After not showing up at that time, he proceeded to promise that work would begin on eight separate dates, missing all of them. During this time I received no communication from Mr. Phomalee unless I initiated it, and when I did he made an excuse related to his vehicle or family each time. Finally, I informed Mr. Phomalee that I needed him to return the funds paid to him as it had become clear he had no intention of doing the work for which he had been contracted. He informed me at that time that his previous excuses had been lies, that he had used the money I'd paid him for gambling, and that he most recently had not been able to due the work because he'd been trying to secure a loan to cover "the bad checks [he] had written to gamble so [he] didn't go to jail". So, I'm now in a position where I've had an unusable shower for two months, and will be forced to seek legal action against Mr. Phomalee to attempt to recover my money.

Unfortunately most of what [Member Name Removed] said is true except that it was never intentionally. I had to be honest with myself and admit that there were things in my life that were out of control. I had to swallow my pride and ask for help. I am not proud of my actions and apologized to [Member Name Removed] for involving him in my issues and returned all his money.
5.0

Job was completed satisfactorily after some delays because of back ordered materials and the installers personal family business.

Description of Work
vinyl siding on a shed

Ended up replacing the pump ourselves, but Mr. Phommalee pointed us in the right direction.

We have always been completely satisfied with the quality of his work and with his professionalism.

Description of Work
Plead has done many jobs for us. Including installing doors, replacing damaged floor tiles, building a stone wall around our deck and custom building a storage cabinet for cable boxes and other TV components.

I was very satisfied with his workmanship, friendliness, and professionalism. The results still look as great as if they had just been done.

Description of Work
Ranch home needed new roof. Old roof was leaking and also damaged some ceiling areas. He discussed options, pricing, and made material suggestions based on weather conditions I should prepare for in a roofing choice. Provided a detailed quote at a fair price and completed the work quickly over about two days that also included repairing damaged ceiling sections. The roof was laid two years ago. It still looks brand new after high wind storms, rain, snow, and direct sun. Several homeowners nearby who had roofs replaced around the same time by different roofers experienced the loss of sheets of shingles from the same storms. He also did some needed electrical and plumbing work. I am very impressed with his work ethic, integrity, and great workmanship. I would definitely use his services again and recommend him to anyone needing roofing and other handyman needs.

He is very professional and did work in timely manner. He has great work ethic and is very trustworthy. I would highly recommend him.

Pleda did an excellent job on each and every project and I feel grateful to have someone I can trust to call in the future.

Description of Work
My husband was recently diagnosed with early onset Alzheimer's and for the first time I needed someone to take care of house projects. Pleda did everything from plumbing, fixing the roof, replacing outdoor trim, electrical work as well as installation and set up of a gas dryer. Everything was done on time and he did a great job of cleaning up after his projects.

Pleda fit us in, even when his schedule was full. We were flexible, so he came for a couple hours each day at the end of his previously scheduled work. Apart from wishing the washer and dryer were on opposite sides of each other, we are very happy with the quality of work.

Description of Work
Install laundry hook-ups in laundry room, where the previous pipes had been cut.

Went very well. I would recommend him to anyone.

He did a great job. Will hire him in the future.