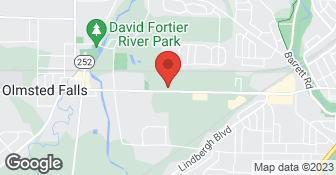 Pristine Clean is a professional source for pressure washing with nearly a decade of experience servicing Northeast Ohio. Each year we spend significant amounts of resources to ensure that we are on the cutting edge of the industry. We are certified members of the Power Washers of North America (PWNA) and all of our service technicians go through extensive training in order to offer the highest quality service in a way that is safe for your home and property. We have the knowledge, skill, and equipment to perform with excellence....

I am very pleased with the results of the job Pristine Clean did. My house looks nice and clean again. Would highly recommend.

Thanks for the review!

We purchased a power wash of a small composite deck on the back of the house. The crew was pleasant, but were only there for about 20 minutes. You wouldn't have been able to tell a before picture from an after picture following the service. We were charged $320 for a job we could have done just as well (or better) with the garden hose. Maybe they do decent with siding or driveways, but I strongly advise against hiring these guys to wash composite decking.

Description of Work
Power wash of a small composite deck

Sorry, [Member Name Removed], we want every customer experience to be a good one. And yes, our crews are very efficient with the service. Our 8-gallon per minute machines wash way more effectively than these small units that homeowners or competitors use.

The project included house clean (3200 Sq ft) and concrete clean and seal: driveway, front walk, back patio and walkway, and city front sidewalk (total approx. 2490 sq ft). They quickly responded to my initial inquiry, provided an estimate and scheduled the work (at our convenance). They were prompt and professional answering all my questions and performing the work. We are pleased with the results and would hire them again (this was the second time we have used their services).

Our house is aluminum sided and very old. They told us that they wouldn't be able to get all the dirt out because of the age of the siding before they even started. The siding came out so much cleaner and brighter once they were done and we were very happy with the way the cleaning came out.

Thanks for the detailed review!

Eric W and his team did an amazing job - they arrived early, were very courteous and professional, and finished the job very efficiently

I have algae growth on the north end of the house. The guys came and did a great job. The algae is all gone and the house is nice and clean. As an added surprise, my windows were very clean when they finished. I was expecting to see a lot of spotting. My patio door is completely clean after the winter dirt. There are just a few spots on a couple windows. They also treated the house with a protectant. Since it was just sprayed on, I don't know how well that works. Another big company told me it doesn't do anything however they don't offer that service and might have been saying that to get me to go with them. The other big company quoted me $630. I told him I couldn't go over 400 and they said OK we'll do it for that. I did not like that they were trying to gouge me to start with & am glad I opted with this company.

We are so happy to hear this!

This is the second time I have used this service, first time was 2 years ago. No complaints will do this again.

Thanks for the shoutout!

Couldn't have been easier! Gutterboys makes scheduling easy, and the team was efficient, effective and courteous. This visit was especially great thanks to Chris, the lead tech, who realizing I was home made the point to ask me to inspect their work before they packed up and left. Of course the work was great, but this touch really shows their attention to customer satisfaction. Absolutely recommend Gutterboys for pressure washing!

We are glad it was easy for you. That's our goal!

Great job! It make a huge difference. The driveway and patio look like new. Thank you, Anthony for the great work!!!

Mark and Sam showed up on time and did a wonderful job. I didn't realize it was that dirty until they finished. What a difference. Everything looked new. You could tell they took great pride in their work. THANK YOU Pristine Clean !

I had arranged for Pristine's sister company, Gutter Boys, to clean the gutters and downspouts after we took possession of new home. I called them to confirm and they said that "Pristine will take care of it" since they were scheduled to treat the roof after the gutters were cleaned. So Pristine's sister company, the Gutter Boys never showed up (or called), but Pristine did. I asked Pristine's employee about the gutter cleaning and she said she knew nothing about it. I also asked her if she was going to blow the leaves out of the gutters before she treated the roof and she said she would. After the treatment, I asked if she did, and she said she had done that. After I paid and she left, I went to the second floor bedroom and saw that the valleys and the gutters below them were filled with wet leaves from the treatment. I ended up climbing a ladder and cleaning them out myself (I am a senior citizen and should not be on a ladder, which why I hired them in the first place). I paid my bill, but that will be the last time I use them, and I will not recommend them to others.

Description of Work
Roof treatment for mildew and moss

This review has nothing to do Pristine Clean.

They did a great job, and I'm happy with them.

Description of Work
Power Wash a Driveway or Concrete

Thanks so much for the review!

It was great! Very nice job, very nice personnel. They came back after the rain that day and sealed it again! I would use them again and I highly recommend the company! ESy to work with and very professional….

Description of Work
Power washed the driveway and sealed it!

Very flexible in schedule and upfront with pricing. Chris, the tech who came out, went above and beyond to help me out and explain things to me. Very happy overall with the service.

Excellent job done by the technician! Careful, Courteous, Knowledgeable and efficient. That's not to say the other times I had my house and garage power washed by Pristine were not done well--they were, but this time I believe the technician (Anthony) deserves a huge "shout out". Whistle clean. No complaints at all. For me it was one of the best jobs done to date by Pristine Clean!!

It was a great experience. Sales rep, Adam sent us a quote immediately and there was no high pressure sales. We asked for a couple days to decide, notified Pristine that we would go with them and next e-mail confirmed the date service would be provided. The technician called approximately 1/2 hour before arrival. I had to leave for a while and returned to see the drive cleaned and sealed. They also provided time frame for walking and / or driving on the driveway. Price was reasonable and we plan on using them in the future!

Mark and Tim showed their highest professionalism and very high quality work level during their works, and they also worked very hard to complete on time. I would like to choose them in the future.

They did an excellent job and they were very good.

Description of Work
They washed my deck and everything.

All the algae is now off the siding and they even did the siding that was part of the enclosed patio. Wish I had done it years ago.

Power washing on detached garage and deck and addition. Excellent

Excellent! We haven't had the house washed in at least 10 years. The north side had lots of green crud. Our technician, Dereese (not sure about spelling) spent about 2 hours to make it look new again. I was really impressed with how most of the windows dried clean after the wash. I would definitely hire again.

Guys did a great job, house looks beautiful. Were very thorough in their walkthrough and were courteous. Will definitely use again.

Description of Work
Powerwashing of house

Excellent job. Ryan was very thorough and was also careful when working around my foundation plants. Very satisfied with his work. My neighbor even commented on how nice everything looked.

and garage last year. They were so good we wanted our concrete and driveway cleaned this year. They did a super job for us. They had some equipment trouble which they took care of. being late in the day, they came back today to put on the sealer. My neighbor gave them a very bad time about blocking their driveway. Let me assure you they did not block him in. I have security camera photos that show he was not blocked in. He really gave the men a hard time . His car was in the shop, and his mother didn't leave until 7:30, long after the men had left for the day. Thank you for doing a really good job. Add photos

Professional Pressure Washing Job of Driveways, Pavement, and FREE CHAIRS. Over 5 years of experience. Blinxus Wash is a professional power washing company that pressure washes driveways to make them look new again. Just give us a call today to get your project started and a free quote!  …

Window Genie of Cleveland West is your locally owned and operated leader in streak free window cleaning, window tinting, pressure washing, gutter cleaning and holiday lighting. Window Genie's commitment to customer satisfaction and professionalism is what has made us America's fastest growing home service franchise. With world class training and service standards, you will feel safe knowing our uniformed technicians have completed a thorough background check and will take great pride in caring for your home or office. We carry full insurance, are bonded and use only the best equipment and materials available in today's market. Estimates are always free.  …

How is Pristine Clean overall rated?

Pristine Clean is currently rated 4.8 overall out of 5.

What days are Pristine Clean open?

Are warranties offered by Pristine Clean?

What services does Pristine Clean offer?