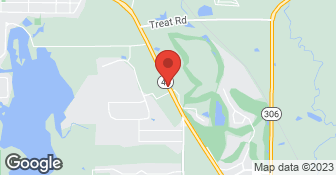 Description of Work
Regrading yard for water drainage and reseeding.

Great. They came in wiling a crew of 5 peolple that were very curtious and has the roof replaced before the rain came in. Would definitely use them again. Hopefully not for another 25 years!

More like what he didn't do.... which is anything. I don't understand these companies who treat potential clients like garbage. Is business really that good? It must be. We contacted Blackstone and were glad to hear they could come out the same day. They were in the area and would stop out around 3. Was it true? Nope. Didn't come. Didn't call. But ok... things happen. So we texted around 5... no response. Then called again about an hour later and got ahold of someone. They apologized. Promised they'd be out the next day and call ahead. Did they do that? Nope. Didn't call. Didn't stop out. Who is running these businesses? It's crazy. Now almost a week later still nothing. I can only imagine how bad they'd be if they were actually doing work for us.

Description of Work
Nothing. Nothing at all.

Timely, professional, competitive pricing, honest, extremely nice. They treat you like you are their only customer. I highly recommend Blackstone!

From proposal to completion of the work the were a pleasure to work with. Very responsive to our requests and did a professional job with our hardscaping and landscaping.

Tim and Rick arrived at 9 AM as planned. Brought 9 yards of mulch with them. Immediately started worked in areas around large trees in side yard. Worked their way around the yard mulching and edging trees and 4 large flowerbeds. They removed 11 bushes and replanted 9. They worked for 10 hours until the job was done! Upon completion, they made sure all plants were thoroughly watered, and swept and washed off the areas where the mulch had been dumped. They were extremely professional and diligent in their work! A job well-done!

Description of Work
Weeded and mulched all trees and flowerbeds in yard. Removed 11 bushes and replanted 9. Owner drove with me to my chosen nursery to pick up bushes and transport them to my home.

Troyers Tree Service is an Amish owned and operated company specializing in all aspects of tree service! We have an eye for detail and we are confident we can solve your tree problems. From large hazardous removals to routine maintenance to keep your trees beautiful we have you covered. Customer satisfaction is a priority for this company! Please call us today - as we have many years of experience and a team of people that will not let you down!!  …

Established in 2000 & a 6x Super Service Award winner, we specialize in residential & commercial interior/exterior painting & pressure washing, but also do many other home services. We are fully insured, carry workmans compensation coverage, and only hire professional painters that have at least 10 years of experience. Our quality, experience, and affordability is what sets our company apart from the competition. Not only can we provide painting and pressure washing services, we also can provide staining, faux finishes, drywall repair, wall paper removal, radiant barrier coatings, and much more! Check out our 'services offered' section below for a full list of services. We pride ourselves on our workmanship and the customer service we provide. We have won the Super Service award in 2013, 2014, 2015, 2016, and 2017, with no plans of stopping in the future. Give us a call for all our home project needs today!  …

Blackstone Property Maintenance LLC is currently rated 4.1 overall out of 5.

No, Blackstone Property Maintenance LLC does not offer eco-friendly accreditations.

No, Blackstone Property Maintenance LLC does not offer warranties.