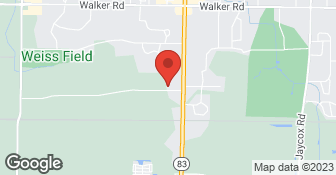 David and his guys came out to help with a major plumbing issue that involved the digging up sewer going outside as well as creating a hole in the basement floor and rerouting the plumbing. He was very helpful, honest and despite being a huge emergency job, it was less than we expected.

Bruce came the very next day (It really wasn't an emergency). He came near the beginning of the time slot that was promised. He was efficient and corrected the problem in short order and tested the flush. He was very professional as well as personable. I highly recommend him

Description of Work
My toilet was plugged.

After reading other positive-sounding reviews, we decided to give David Frey Plumbing a try when our hot water tank stopped working on a Saturday morning. We were quoted $180 for the drive to us plus up to half an hour of work from their tech because it was "emergency hours" (weekend). Since we firmly believed that our tank was going to need either a major repair or replacement, we felt this was acceptable, especially since it would go towards the price of a new tank. The tech arrived within 10 minutes of our call since we live so close to Avon (Westlake), but after getting into our basement, he simply pressed a reset button and the pilot lit just fine. Apparently, there was nothing actually wrong with the tank. The entire episode lasted 5 minutes. Now, we are a new family with a 6 month old child and a new house, so we already have expenses up to our eyeballs. Although the service we received had value, we felt that 5 minutes and a press of a button wasn't worth $180, but we paid it anyway and let the tech know we would talk to management to see if they would be at least willing to charge us their standard non-emergency rate of $90 due to the nature of the issue and speed at which it was resolved. We were not looking for a full refund. If not, then a polite decline would have also been acceptable. Instead, David's daughter became NASTY with my wife on the phone, saying that was the "cost of doing business" & claimed that the $180 was what the company had to pay the technician for his 5 minutes. A follow-up call from David himself led to MORE NASTINESS and a THREAT TO SUE US FOR SLANDER because we said we would like to let others know through reviews how horribly we were treated when we contacted them after the service was performed. A little common courtesy and respect goes a long way in our book, and David Frey Plumbing proved that they do not care about their customers. We will not be giving them any more of our business, and urge you to do the same!

They were prompt with their service call and were able to complete the job quickly.

Description of Work
Install pipes so that deduct meter could be installed.

Plumber was knowledgeable and professional. Had to break into the wall to get to the pipe, but stopped the leak. He made sure the hole was covered by a plastic patch - ensuring if necessary we could get back into the wall at the pipe.

Wonderful customer service - office/scheduler was great and responsive about products and product pricing.

It went well. It was fairly on the higher end of what we can get, but it was something I needed. He recommended a good product and installed it quickly. He just did his job and he did it well. With regard to price, I have nothing to compare it to. With regard to professionalism, He just wasn’t the happiest camper; who knows what was going on in his day. It was fine.

Description of Work
My sump pump failed, so I had water damage. I had him come in and replace the sump pump and put in a battery backup.

David is very responsive to his customers. I had dripping in the basement from the powder room on the first floor. He came right out and diagnosed a leaking seal on the toilet. I had been planning to replace that toilet anyway, so he was able to do it right then. While he was at my house, I had him replace a non-operating garbage disposal in the kitchen island sink. He had both of the replacement units right in his truck. I have used David Frey several times over the last decade and he always comes out himself - this time with an assistant. I have not compared his pricing to other service providers.

Bruce arrived within the time frame we were told he would arrive. He accessed the the current water heater and recommended a new one. . He was not aware of the other issues we had called about but looked at them and agreed to fix the outside faucet.

We are fully licensed, bonded and insured and know that the only measure of success is the satisfaction of our customers. EDC offers video camera inspections, drain cleaning, basement waterproofing, sewer line repair and replacement in your home or business.  …

Approved Plumbing is a family owned and operated local business with over 150 years of combined industry experience. At Approved Plumbing Company it is our philosophy to provide impressive customer service by being exceptionally prompt, courteous, clean, knowledgeable, reliable, and responsible. We will constantly strive to be highly efficient and organized in all aspects of our business and to use only the very best in quality material and state of the art equipment. Our employees will be highly trained individuals who take great pride in their work, command respect of their peers as well as be respectful of others. We will pride ourselves in being honest, loyal, trustworthy, and true professionals as we try to maintain our goals as industry leaders in the service and repair field. As a Super Service Award winner, we are an excellent plumbing company for Angie’s List members because of our quality of work and our years of industry experience. We would love the opportunity to partner with you and all of your plumbing needs.  …

Bonded
Insured
All statements concerning insurance, licenses, and bonds are informational only, and are self-reported. Since insurance, licenses and bonds can expire and can be cancelled, homeowners should always check such information for themselves.To find more licensing information for your state, visit our Find Licensing Requirements page.
General Information
Free Estimates
Ask for Details
Eco-Friendly Accreditations
No
Payment Options
Check, Visa, MasterCard, Discover
Senior Discount
No
Warranties
Yes

David Frey Plumbing LLC is currently rated 4.7 overall out of 5.

No, David Frey Plumbing LLC does not offer eco-friendly accreditations.

No, David Frey Plumbing LLC does not offer a senior discount.