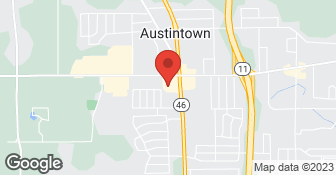 Falcon General Contractors is a Licensed, Bonded, and Fully Insured, Veteran Owned and Operated, contracting service that services North Eastern Ohio and Western Pennsylvania. Falcon GC professionals provide customers with a one-stop solution for all of their contracting needs by offering a wide array of both exterior and interior solutions designed to reach beyond the customers highest expectations. Falcon General Contractors is dedicated to upholding the highest levels of professionalism and craftsmanship by maintaining organizational core values of honesty, integrity, and commitment. Falcon GC is also committed to servicing the needs of every customer. Through the practices of Total Quality Management, the organizational structure provides a unique system of checks and balances to insure that every project meets and exceeds customer expectations....

The representative of Falcon Construction came out to the house, took pictures, and then promised he would get back to me with an estimate the next week. I stressed to him that it was important to get this job done before winter and that I had already one company here to give me an estimate that never came back with one. I told him that if he couldn't do the job, to please just tell me, so I didn't waste his or my time and I could move to the next company. He assured me he would, promised me that he would have me an estimate the next week....I NEVER HEARD FROM HIM AGAIN! Another two weeks wasted. Would never give them another opportunity! Just as a side note, didn't really appreciate his snarky sarcasm with my husband...not very professional.

Description of Work
Came out to give me an estimate on a chimney repair. Took pictures and assured me that he would get us the estimate the following week.

Mrs. (member name removed), I would first like to thank you for your review of our Company. While we do encourage our patrons to review us and our performance on social forums, we generally ask that patrons attempt to address grievances and complaints directly with the company prior to posting negative reviews in a social setting. Our organization is always more than willing to address grievances of customers and potential customers, as we are firm believers in integrity, humility, and follow through. After reviewing your file with the salesman who prepared your assessment, I have taken the time to prepare a response for your consideration. Upon my inquiry, it was identified that a verbal estimate for the flashing of the chimney was given at a rate of $600.00, and that price did not include any additional repairs that may arise, such as rebuilding the chimney, which can only be identified by a Chimney Mason. A rough estimate of $1,000.00 was also given, if the chimney actually needed rebuilt; however, in order for us to provide an accurate estimate, we must put a Chimney Mason on the roof, which is not a free service but, from my understanding, the option was provided. As for your declaration of “Snarky” and “Unprofessional” salesman, I do apologize for any misinterpretations of information, questions, and/or statements made by our representative. While the tone and domineer of individuals can sometimes be mischaracterized, here is the explanation as I received it. When a "homeowner" proclaims that their roof has been leaking for 2 years plus, the nature question to ask would be "why did you wait so long to have it looked at?" To further the conversation, the "homeowner" replied with "well, I have had 3 roofers look at the problem but, they all think the chimney needs rebuilt, and I think it is only the flashing around the chimney." As I am led to believe, the follow up question from the salesman was "why didn't you have them repair the flashing only?" To which the final reply from the "homeowner" was "I cannot get anyone to call back, and the one guy wanted too much money." I suppose that any logical question could be confused for "snarkiness" if one participant in the conversation is being asked a serious of questions that they may feel is intrusive or inappropriate but, I assure you, the intent of the questions are to help establish a clear understanding of the situation, not to berate or demoralize. If a homeowner calls a roofer for a roofing assessment, and 3 previous roofers tell the homeowner “the chimney needs rebuilt,” than it is quite possible that it is the chimney, not the flashing around the chimney. This is why most homeowners call for a "professional assessments." Regardless, I do apologize for any miscommunication between you and our salesman.

We are Northeast Ohio's premier window cleaning and power washing company! Our trained technicians are expertly trained to provide top customer service and communicate efficiently. We also have your health in mind by wearing masks at all times.  …

Falcon General Contractors has the right size crew for any project. With over 15 years’ experience in the “turn-key” New Home Build industry, the owners of Falcon GC have perfected a network with the customer in mind. With our Custom Designing Software, customers can “walk-through” their Dreams before a screw is ever turned. Falcon GC specializes in New Home Builds, Additions, Decks & Patios, Concrete & Missionary, Roofing, Siding, & Windows, Kitchens and Baths, and we offer much, much more!

Falcon General Contractors, LLC is currently rated 2 overall out of 5.

No, Falcon General Contractors, LLC does not offer a senior discount.

No, Falcon General Contractors, LLC does not offer warranties.

Falcon General Contractors, LLC offers the following services: Falcon General Contractors has the right size crew for any project. With over 15 years’ experience in the “turn-key” New Home Build industry, the owners of Falcon GC have perfected a network with the customer in mind. With our Custom Designing Software, customers can “walk-through” their Dreams before a screw is ever turned. Falcon GC specializes in New Home Builds, Additions, Decks & Patios, Concrete & Missionary, Roofing, Siding, & Windows, Kitchens and Baths, and we offer much, much more!