With Angi since September 1999 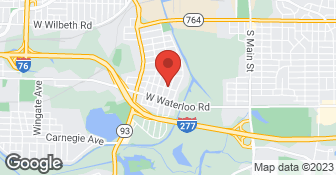 We initially contacted this provider for our filter in our refrigerator we ordered it for him to install and fix the part of the refrigerator that was not sending water to the dispenser. Instead he put a bypass on our refrigerator stating now you do not need for the filter. Realize that we asked him to fix our filter. in the midst of his repair he broke our tubing, and had us pay for his mistake. We paid another 200+ dollars for this service. Overall he constantly came out to fix the refrigerator charging us for his mistakes and after spending 700+ dollars I said enough is enough, and found someone else. The big problem is this bypass he set up on his own, is a problem because I cannot find anyone to undo this and will not allow his incompetent self back into my house. Nice guy but did not deliver Honestly I would not recommend his incompetent service and am disappointed because I was recommended by angles list.

Description of Work
This is an ongoing repair for our refrigerator that the provider began but never completed the task.

HE IS A LOCAL WHO IS NICE. HE'S FAST AND HE'S A A NICE GUY. HE'S FRIENDLY AND KNOWLEDGEABLE.

Since 1978 J & B Appliance has been providing in-home service on major appliances to the greater Western Reserve area. We currently have Have 8 Full-time employees, That includes 6 technicians and two Office staff. All service is COD. And we always flat rate quote the job before anything is done. We accept all major credit cards, and cash. We also replacement parts.  …

Marty's Appliance Service & Sales in Cleveland, OH is a privately owned company. We have been repairing appliances in the Ashtabula and Cuyahoga counties for over thirty years. For a QUICKER RESPONSE, please call me at (216) 251-3888 or send me an email at martyhones58@icloud.com  …

DURABLE APPLIANCE SERVICE is currently rated 3.5 overall out of 5.

No, DURABLE APPLIANCE SERVICE does not offer eco-friendly accreditations.

Are there any services DURABLE APPLIANCE SERVICE does not offer?