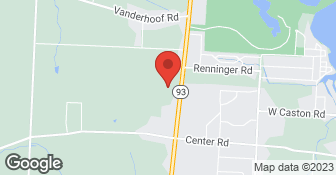 We are a family owned business established in 1986. Our family is excited to serve your family. We pride ourselves in taking care of your biggest investment as much as you do. We currently have 10 employee's and work only with the finest of trade partners. FREE ESTIMATES! Costs are per job basis....

Description of Work
This company made significant improvements to my free-standing garage - new roof, doors and windows, vinyl siding, gutters and downspouts. They did a fine job and I am very happy with it. If I had one complaint, it would be that it took longer than estimated, but that was no big deal - it's only a garage, not living space.

They are reasonable and they're honest and they tell me how much I need to do and all that kind of stuff, so I thought they were very good. I like that they come out, no job is too small. They explained all they were going to do, explained the best way to do it, do you want to do this, how far do you want to go. They ask a lot of questions and then they tell you. And they stick pretty close to their estimate and if they have to do more than they tell you, so I like that before they go ahead. I would say they're very professional. They actually said that back when the house was built, the builders didn't know all there was to do about that the way the house is met, the siding and the roof and all that and that they thought he did a good job because he only had that one spot. They didn't batten out the guy or anything, they just said things have changed and he wouldn't do it that way now and they were very professional. They were very nice people, got right on the job, got it done. I like that.

Description of Work
I used the company, I don't have their formal name, it's Bahry I believe. They do roof and siding and they did a siding for our house, because when the builder build the house didn't put proper flashing up against the house and water came down in between, between my front, the sweater and the inside wall until it actually again have a leak in the side of the wall and actually it hole in our house and they came and they fixed that. And, then I had some issues with my, I have sweater siding house, and my siding was estranged and looking not good again near the roof line and the siding, they didn't put the proper stuff there where it would run down to go to the gutters because they are not actually in a gutter kind of thing, and he fixed those also and repaired the leak that we were having trouble getting fixed and it's still fixed.

We hired Bahry and Associates to reside our home using Hardy board and wrap all exposed wood around windows and doors. They did great work and the guys couldn't have been nicer or more accommodating. Our only complaint is that the project took much longer than anticipated. Part of the issue was a new insulating product that was used but there were also some staffing issues. As we had no specific deadline for the project, the delays were not a huge issue for us. Their work was exemplary and we would hire them for future projects.

Did wish quality work, a little pricey but worth it.

Description of Work
Replaced two large sections of cedar siding on my house.

Mr. Tim, the estimator, was thorough in his contact with us. He gave us more than one option with materials. The pricing was reasonable, and the work crew was on time.

Description of Work
Removed the old roof, and installed a new roof. They cleaned up the old materials and left the property in an excellent condition.

Junior and Mary Ann B.

They were very quick to respond to our call for a estimate. They came at a good time for us in the evening. Once we received the estimate which they brought back and went over it with us. They explained the process and once all the cabinets and flooring came in they started and kept us up to date on the progress of the renovation. Matt Byard the sales person called frequently to see how everything was going same for the owner Bill Bahry. The associates working for Bill are wonderful,polite and went the extra mile for us.We can not say enough good things about Bahry & Associates.Thanks again for a wonderful experience and look forward to working with you in the future. Thanks Junior and Mary Ann

Description of Work
It was a very pleasent experience they remolded are bathroom,kitchen ,and living room.

We are a full service remodeling and general construction company. If your house needs it, we can do it. No job is too big or too small! We install James Hardie siding.

We are not a cleaning service,

BAHRY & ASSOC INC is currently rated 4.8 overall out of 5.

No, BAHRY & ASSOC INC does not offer a senior discount.

No, BAHRY & ASSOC INC does not offer warranties.

BAHRY & ASSOC INC offers the following services: We are a full service remodeling and general construction company. If your house needs it, we can do it. No job is too big or too small! We install James Hardie siding.

Are there any services BAHRY & ASSOC INC does not offer?

We are not a cleaning service,