With Angi since February 2006 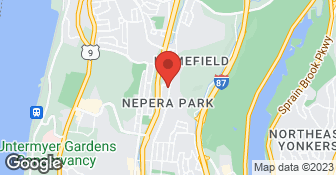 ALLSTATE IRRIGATION SPECIALIZES IN RESIDENTIAL, COMMERCIAL AND INDUSTRIAL SERVICES. WE ARE WESTCHESTER COUNTIES PREMIER SPRINKLER SERVICE. CALL US TODAY SO WE COULD HELP YOU WITH YOUR CUSTOMIZED LAWN CARE NEEDS. WE MAKE APPOINTMENTS TO YOUR CONVENIENCE. OUR SKILLS & EXPERTISE INCLUDE: AUTOMATIC & CUSTOM DESIGNED SYSTEMS-SERVICE & UPDATE EXISTING SYSTEMS-INCREASE ON LOW PRESSURE WELLS AND MORE! ...

When we bought our new house we inherited this company from the previous owners. I called them the first couple of weeks we were in the new house to fix a clogged sprinkler head. I was not home when they came but they had access to everything they needed. Problem wasn't fixed so I called them again a week later to come back. The owner came the second time, with who I am assuming was a co-worker. They talked to me for less than 10 minutes, looked at some things and said they needed a part that they'd have to come back, which they did, a few days later. The repair took less than 30 minutes. When I got the bill it was over $600! For a clogged sprinkler head! We pushed back and they lowered the bill but not nearly enough, in my opinion. They aren't terribly pleasant to deal with either... When they came in the fall to flush the system and turn it off they charged me $187.91. Again, they were here less than 30 minutes. We will be finding a new irrigation company to use this spring.

Description of Work
Repaired a clogged sprinkler head and winterized system in the fall.

It took a long time to schedule an appointment they would only come if they were in the area. The finally came to turn on the sprinklers and never checked the heads.. I notices one head was buried and was flooding the area another was not high enough and could not reach the lawn. I called to have them come to repair it ...got a snippy response from the receptionist ... scheduled an appointment ... waited the required 4 hour window ... at 4:45 I called and said no one had come they said someone would be there...no one ever showed... called back to reschedule...still waiting for them to call me...

Description of Work
I use allstate for my turn on and turn off..

I was very happy with the work that Sal and his crew did. They were very good.

Sal came out and gave me an immediate quote after eyeballing the property. He explained the proposed system and answered all my questions professionally and comprehensively. The installers came out bright and early on the agreed upon day and had the entire system put in within a few hours. They seemed quite efficient, and some of my neighbors have commented on the quickness of the installation. Sal came out personally the following day to explain the timer operation. The company provides a two year guarantee, which I am yet to take advantage of, as the system's been working flawlessly for the last month.

Description of Work
Installed a 7-zone sprinkler system covering a quarter acre plot around the house.

Very well - quickly, professionally. And when I had an issue with one of the sprinkler heads needing to be changed, Sal came right away and made the adjustment.

Description of Work
Installation of a lawn sprinkler system

I was very pleased with how quickly the job was schedualed, thier promptness as well as how quickly they determined the malfunction and repaired it. Left without any mess and I had them replace my other two control heads as well. My descision to add this replacement to the job. No pressure and was not even approached as to having this done. The workers said it was a good idea to do and I did agree with them. I would use them again without hesitation.

I called Sal for an estimate and he called me back promptly. We met a few days later at my house and walked the property. My lot is on the small side but has many plantings including tiered perennials beds on the side and back of the house. It was challenging because in some areas there would be as much as 4 feet between levels. Sal gave me options based on different coverage and prices levels. Ultimately I went for more on the high side to get the optimal coverage and I am not sorry I did. What was amazing was that as Sal gave me a verbal estimate he mentioned that he had a team of guys working in the next town and he could send them over in an hour or so to start. This was Spring and I am sure he was very busy, so I was pleasantly surprised to say the least. So by the end of that same day 80% of the work was done. They returned the next morning and finished the work. They programmed and showed me the system and it worked great throughout the Summer. Later that week, I dropped off the full amount at his office (I never gave him a deposit - he said it wasn't necessary). The women in the office who do the billing and scheduling are also very nice and professional. They call you to remind you to schedule time for the system to be winterized. The annual contract for turning off and on again in the Spring costs $175.

Description of Work
Installed a sprinkler systems for front and back lawns and raised perennial garden beds.

Sal just happened to call the landscaper that I was meeting with. Since I indicated that I was interested in a lawn irrigation system, he asked Sal to come to the house right then. Within 15 minutes, Sal came, gave me an estimate, said the work could be completed in less than a day and I hired him. His crew came and coordinated their work with the landscaper. They worked efficiently and finished in half a day. They were so neat that I could not tell where they had dug trenches. After the landscaping was finished, Sal came to readjust the sprinklers so that all areas I needed were covered. He also reviewed with me how to use the system.

Description of Work
They installed a 3 zone irrigation system on hilly terrain and a lawn.

Excellent experience from start to finish. Responsive from initial telephone call to them to request an estimate. They came out and assessed property within a few days. They sent an estimate (very reasonable) soon thereafter. They provided references upon request (all were pleased). They followed-up to see what I thought about their estimate. Once I accepted their estimate, they scheduled installation (within a week and on a weekend at my request): installation went smoothly. Very pleased with system and work. They did not cut corners. Everyone from office staff to workers were very polite, professional, efficient, responsive, and good at what they do.

Description of Work
They came and gave an estimate which was significantly less than the other 3 competitors we approached. They gave us several references to call. They were prompt, polite, knowledgeable, and completed the work, installing 5 zones efficiently.

Overall satisfactory. The initial installers did not put in the rain sensor - we had to call a few times to get that rectified. Their price was good compared to the other quotes we got.

They did an excellent job and it was done professionally. They sent more than one man so the job was done a lot faster. I will be getting them for our spring start-up.

Description of Work
Winterized the sprinkler system. Fall Turn-off service included: shutting off the water to system drainage of all water from system, blowing out lines and disconnecting the automatic timer

Water Pro Lawn Sprinkler System is New York’s editor’s choice for sprinkler systems in the Tri-State area. With over 12yrs of experience our teams are capable of creating the most efficient and thorough systems that will keep your lawn looking beautiful for years to come. No job to big or small we have solutions to meet any of your project needs. Contact us to see how we can help you today!  …

Our business is our livelihood but it is also so much more. Always Green Landscaping, LLC was started to fill in a void in the current market and to make a business that people can place their trust in. Over the years we have never lost our commitment to our clients and that is what has allowed us to succeed in a very competitive industry. The employees of Always Green Landscaping, LLC stand committed to our purpose and will provide the best service!  …

CELEBRATING 40 YEARS OF BEAUTY AND EXCELLENCE!!• Award Winning Service • A+ BBB Rating • Since 1980, A Palmieri Landscaping has remained a Locally Owned & Family Operated Landscaping Company Proudly Serving Westchester and The Bronx for their Landscaping & General Contracting needs for over 35 Years! • From the simple to the spectacular, you can rely on our knowledge and experience to enhance the beauty and increase the functionality and value of your property! • No job too big or small! • Well Established Local Reputation - Choose a company you can trust! • Call (914)699-2257 for FREE Estimate or to Schedule an Appointment! • DCP License #: WC03530-H91.  …

Insured
All statements concerning insurance, licenses, and bonds are informational only, and are self-reported. Since insurance, licenses and bonds can expire and can be cancelled, homeowners should always check such information for themselves.To find more licensing information for your state, visit our Find Licensing Requirements page.
General Information
Free Estimates
Yes
Eco-Friendly Accreditations
No
Payment Options
Check
Senior Discount
No
Warranties
Yes

How is ALLSTATE IRRIGATION overall rated?

ALLSTATE IRRIGATION is currently rated 4.6 overall out of 5.

No, ALLSTATE IRRIGATION does not offer eco-friendly accreditations.

No, ALLSTATE IRRIGATION does not offer a senior discount.

Are warranties offered by ALLSTATE IRRIGATION?

What services does ALLSTATE IRRIGATION offer?