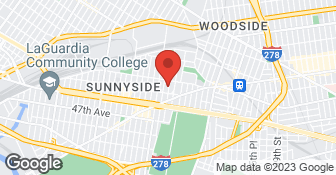 DO NOT HIRE THIS PERSON! Name is Stephen H. Alegria. He presents himself as the Owner/Designer of New York Garden Design & Landscape or HST Garden Design & Landscape (www.nygardendesignlandscape.com). I agreed to hire him for Fall cleanup which he described to consist of trimming, lawn mowing, and leaves removal and disposal. He said he would send an invoice with a complete description of the work. He never sent it. Since my garden is over one acre, I asked him whether he was equipped with the right machines and man power. He said he was, claiming to have an established business in the Hampton?s. I also alerted him that our house is in a landmark area and the work could not be performed during weekends. He came on a Friday with another person and spent 5 hours in my garden for some very minor trimming, and moving the leaves to two different locations at the site of the house. He did not mow the lawn claiming it was wet. He left saying that different crew members would have stopped by later that day to remove the leaves. I gave him $550 in cash assuming he would send the receipt by email. Needless to say, he did not. Around 5:30pm that day I sent him an email notifying him that nobody had come to pick up the leaves, and reminding him of the landmark situation. No answer. After a phone call and another email the day after, during which I told him I would go to the authorities if he did not come to pick up the leaves, he sent the following email: "The way I do business in regards to leaf clean up is as follows: Crew members clean leaves, grass clippings, and other landscape debris. Cutting are then moved to a specific location at the site and another crew comes in and picks up leaves. Sometimes this happens right away sometimes it takes a day or two depending on schedule. I did not realize your neighborhood is a landmark area with strict rules. My crew will pick up the leaves as discussed and as soon as schedule permits. Involving the authorities is not necessary. Thank you for your understanding.>> Leaves were never picked up.

Susan Pollock Designs is a garden company dedicated to providing full professional garden service with a personal touch. We are a group of New York City specialists who have many years of experience working on city gardens and urban landscapes including front & backyards, courtyards, planters, rooftops, balconies, terraces and more. We can transform your outdoor space and create a garden that is designed to your unique personal style and well suited for your site conditions. May it be contemporary or classical no garden is too small to become your dream green space. Susan has been beautifying private and corporate urban gardens for over eight years, steaming from her many years working as a Garden Designer in Paris and New York City. http://www.susanpollockdesigns.com  …

Automatic Irrigation Design is New York's oldest and largest lawn sprinkler company. We have installed thousands of residential lawn sprinkler systems all across the tri-state area. We specialize in new installations, revamps, closings, openings & rain-sensors. We have earned an impeccable reputation for service, quality and competitve pricing.  …

HST Garden Design specializes in custom outdoor garden and balcony landscaping, servicing New York City. HST Garden Design offers you the custom outdoor oasis you are looking for, right in your own home. Working in the Hampton's for over 10 years has inspired HST to bring the calm, scenic tranquility of the East End to New York's City's finest. We make custom decking and planter boxes, lighting, water features, lawn-care, maintenance.

HST Garden Design is currently rated 1 overall out of 5.

No, HST Garden Design does not offer a senior discount.

No, HST Garden Design does not offer warranties.