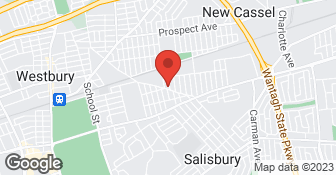 Family owned and operated, Gold Coast Pavers has been a licensed and insured contractor serving Long Island and Metropolitan area for the last 10 years. We have acquired the most up to date tools and the expertise to efficiently manage and construct a wide variety of masonry and landscaping projects, from small to large and simple to complex. Whether you need new construction driveways, walkways, patios, retaining walls, flower beds, or repairs and resurfacings, we provide excellent services that you need and prices you can afford. At Gold Coast Pavers, our goal is to provide you with courteous, expedient, and professional services of the highest quality. As all variety of paving stones have become more and more popular into residential homes, whether to add a great curb appeal for the front yard, or relax into an exotic back yard, Gold Coast Pavers can make your dream true....

Chris and his team at Gold Coast Pavers did a fabulous job that transformed the outside front of our home. We replaced and expanded the driveway and front entry, along with a brand new sidewalk. They delivered the desired premium materials as we requested and the pricing was competitive and transparent. We highly recommend them to any homeowner considering a masonry project in the future.

Beautiful work! Unfortunately I can not recommend Gold Coast Pavers. Some of my pavers have sifted. It took months for chris to come back to look and said that “I’m just put on bottom of a repair list.”.. I haven’t heard from him since..

Description of Work
Pavers for backyard stoop and patio, driveway and front stoop

Chris and crew did a fantastic job with regrading the yard, sodding, pavers and inground sprinkler system. We were looking for a one stop shop and found it with Gold Coast Pavers. Chris was very patient and made sure all our concerns were addressed which was much appreciated. You can tell he truly cares about his business and customer service as he was always reachable if needed. The guys they use are also very hard workers and got the job done fast. I would totally recommend them and use them for my next job!

it went well. Gold coast employees arrived on the date of at the time they designated. They introduced their project managers and got straight to work. Asked me questions about what i wanted removed what needed to stay and recommendations on the best way to pitch the water away from the house. i had my fence put in after they were done and there was an extra hole that was drilled in one of the pavers and Mike was kind enough to come back and remove the paver and replace it with a new one.

got it all done in one day, no muss, no fuss, and extremely happy with the results. very friendly and easy to work with, even with some minor changes on the day of. no high pressure sales either.

Chris and his crew were highly professional ....polite. and skilled workers. They left the job each evening. Clean and organized. Would not hesitate to use them again. The result is as beautiful as promised.

Dear Mrs. (removed member name) We have read this review of services providing to you and wish to express our position. You claim that the work was of bad quality of material, and on the other hand you stated the brick paver work was great. You also recommended us to your mother and stated how nice we were to you. Referring to fixing the electrical problem which was not our responsibility, since we were not told of its existence, after all this favor which you called it would also require us to send a work force back to repair your newly installed pavers. As far as the concrete (cement) work being of bad quality is nonsense, we buy our concrete from an authorized reputable manufacturer, as do many other contractors, and also happens to be the largest supplier in Nassau County. Please be aware of the fact, that steel reinforcing does not add to the strength, only stability after cracking occurs Also, be aware that concrete does not come with guarantees or warranties as stated in our contract. Sometimes its cracks sooner rather than later. Only guarantee one can give is it will crack eventually. This is a fact. I would also like to remind you of another favor we provided. After that winter you called and informed us that 2 small slabs of concrete were showing evidence of spalling, this occurs when excessive salt is allowed to remain on newly installed concrete. This was not our fault and yet we came and replaced them at no charge. Please note we make no claim that we are electricians, we like you, thought the work was done correctly, after all this was your responsibility to start with. We are very sorry for the outcome. Regarding the architect that you referred to, he is not an expert in concrete. He should have never said what he said. The only way to determine if concrete is poorly made is to test it, which he clearly did not do. To make that determination merely on visual inspection is extremely unprofessional. Having the title architect does not make him an expert in anything, he should have known better. I am sincerely sorry that you feel this way. You were misled by him and used bad advice and your own poor knowledge of the industry in writing this review. Mrs. Acosta you were a pleasure to work with and I am shocked and truly sorry for the way you feel. Sincerely, Chris Stasi President
4.0

Description of Work
Everything resolved,

The provider came on time. They worked all day on completing the job. They were diligent with their work. They were able to complete the job within two days. They were extremely pleasant and informed us of each step as it was completed. They also had has check to make sure that the work was acceptable before moving onto the next step. The workers cleaned up their area and the foreman even came back that night to double check to make sure that we were satisfied with the work. The foreman also explained to us how to maintain the patio in order to keep the cement looking brand new. This company was amazing and provided us with a service that I would highly recommend to anyone!

Description of Work
The provider removed cement, put in a cement patio, leveled the remanding yard and placed a 6 ft fence .

A terrible experience for our family, which we were looking forward for.

Description of Work
I had a complete landscape and driveway installed. The experience started off friendly. As the job progressed slowly the company did not show up for many days at a time. To make matters worse, my phone calls went unanswered for days at a time. When workers finally showed, their were only 2 men for a $75,000 job. The owner Chris Stassi did not seem to care much. Installation was unacceptable as well as quality and response. After 3 months I finally had somone complete the job.

City Suburb, Inc., takes great pride in doing your job right the first time. We've been business over 25 years and specialize in the restoration of commercial and residential buildings & houses. Please reach out to us directly at (718) 849-8999 for more information.  …

Eric Janssen Masonry is a classic small business, owner operated and with one long term employee. Eric specializes in the small jobs and repairs that other companies don't. You will be working with Eric from start to finish. He is present on the job site during all phases of job, from initial estimate to clean up. Most of our company's work is obtained by recommendation or referral only.  …

Gold Coast Pavers is currently rated 4 overall out of 5.

No, Gold Coast Pavers does not offer eco-friendly accreditations.