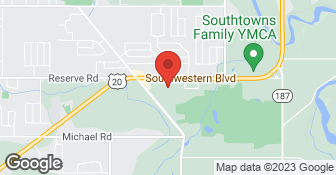 Sahlem's Roofing & Siding Inc. has been serving Western New York for more than 30 years. We specialize in roofing, siding, windows, and doors, sheet metal work and dumpster rental. We are one of the leading residential and commercial roofing companies in WNY. We have worked on more than 25,000 homes and businesses in the Buffalo, NY area and have always put the needs of our clients first. We take pride in our work and have been an active member in the community for years. We source and use quality products and materials. Our staff is dedicated and experienced. (No subcontractors) Customer satisfaction remains the cornerstone of our business....

Need a new roof installed? Are you looking for a reliable contractor for a patio, new garage or addition? We also install windows, decks, siding, and concrete. We have you covered! We are fully licensed and insured and would be happy to help you with your project both interior, and exterior. Call us today and be assured that you will have peace of mind from the beginning of your project through it's completion. We serve homeowners and businesses throughout the Buffalo and surrounding areas.  …

Graves Brothers Home Improvement has been locally-owned and operated in Upstate N.Y. since 1977. As one of the fastest growing businesses in the region, they offer their residential and commercial clients Roofing, Siding, Windows, and other Home Improvement services. Graves is a nationally-recognized contractor that has been repeatedly named a Top 100 company in the region as well as one of the top 500 home improvement companies in the United States, annual Angie’s List certification holder, countless product certifications, and more. Graves Brothers services Upstate and Western New York and the Finger Lakes Region from their facilities in Rochester, Buffalo, and Syracuse.  …

Thank you [Member Name Removed] for taking the time to write a review for us. So glad you are happy with our work!
5.0

It went ok, Just couldn't come out as quickly as what we would have liked.

Thank you [Member Name Removed] for your review and your patience.
5.0

Installers were quick and professional

Thank you for your review, we do appreciate the A rating you gave our company!
5.0

They’re fine. No problems. It’s a decent price and quality work. The work is always high quality. They had crew out here, about five fellas out, and they got it done in probably two hours.

Description of Work
They put up some shutters.

These guys were great. They put in a long hard day, and did a great job on both the roof and the gutters. I would hire them to work on my parents house - they were that good.

Description of Work
Tear off and replace shingles on roof, also replaced gutters.

We left a message asking for an estimate on replacing the entire roof of our house. They never responded to our call. No services, no money paid, NO RESPONSE.

Description of Work
replacing the entire roof of our house

Sahlem's Roofing has left a message for customer apologizing for not returning the voice mail message. We do get quite a few voice mails and attempt to respond to each one. Not sure how this particular one got missed. Stated to customer if he is still interested we would be happy to provide a free roofing estimate for him.
5.0

Description of Work
Replaced gutters and down spots

An update to my last two reviews. The person who was suppose to send someone to fix the issues had fallen ill and was not at work to send them out, so they were not ignoring the issues. Sahlems did come back out. Mike, very professional and another guy came out and spent a few hours fixing the issues. When they were done I took a look, all looks great. They did miss two low nails but I put some roof sealant on them and ya can't even tell. In my last review I said I would not hire them again. But considering it is such a large company and there were a lot of guys here, I can't with a good conscience say that the entire company is bad because of one or two guys lacking a good work ethic or having a bad day. Sahlem's made good on their work guarantee. The roof always looked good now I am sure it is as solid as it is eye appealing. Would I hire them again, Yes. They have been around a long time and I believe in giving people the benefit of doubt. Nobody can be perfect all the time, and they did make it right.

They showed up on time, we were home but nobody ever informed us they were there. It was raining so they waited in their vehicles until it stopped. When they did start they did a really good job of covering all the doors windows and bushes with tarps and boards, moved all my patio furniture off my patio took apart our grills and moved them off the patio. About 6-8 guys were doing their thing for a couple of hours until they took a break. I saw this as my chance to try to escape the house for a moment. Took a quick look around, not knowing how to do a roof i guess things were going ok. About 4pm it looked like they were packing up, i could see they had loaded all the old roofing into a dumpster. They left just as they had arrived without saying a word. They also left all my patio furniture and grills in the yard where they had put them. Anything they moved away from the house to do their job..they left where they put it. The next night it was raining when we arrived home, the downspouts on the gutters go into pipes that go underground. They didn't connect the pipe correctly and the water was all sitting and collecting along the side of my garage. So the next day i thought id go up and look on the roof. While i was up there i noticed a soft spot, the very reason we got a new roof. The screens for the downspouts were gone, and i could see the nails from the shingles in several places. You get what you pay for..but the most expensive isn't always the best either. I only hope it doesn't start to leak.

Description of Work
Tear off and Re-roof with new shingles and needed 10 sheets of new plywood. New gutters.

This is an updated review, after further inspection of my roof I saw the position of the nails. My new gutter is also leaking in the corner. Sahlem's is just ignoring the issues.