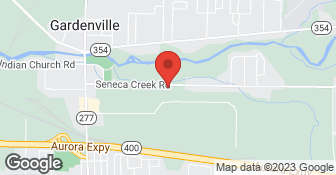 Couldn't be happier. Very professional. The job was very reasonable priced. The workers where hard working, courteous and clean, always cleaned up. The owner answered all my questions in a timely manner. This company went above and beyond my expectations. I have referred RJ Properties to my friends and family. Will defiantly use this company again.

I must say I noticed a bad review about this contractor and I had a completely different experience with RJ Properties. In fact I find that bad review hard to believe. I first hired RJ Properties to build me an addition, I chose them because their quote came in quite a bit lower than the others. The addition turned out great. I gave them 1/2 down, the addition was finished promptly and I paid the balance no problems at all. I was worried because the addition was an add on to my roof, so my roof was cut wide open so time was important. Well it was finished in a couple days, well closed in from the weather. The remaining finish work was done in a timely manner. We were very pleased, and let me tell you my wife is hard to please. We then hired them again for siding, windows, and doors. Again an amazing job, we had one issue and it was our fault. We chose a shade of brown we didn't like, but we didn't notice until 1/2 of one side was finished. Guess what RJ properties didn't charge us for that labor, the owner Jeff was his name said if you want to change the color that's ok but the siding already hung wasn't returnable.. Understood, he said to help with that hit he wouldn't charge us for all that siding he hung or to tear it back down since we were repeat customers. AWESOME. So we got the right color and it turned out incredible. We paid them the balance, and then they told us the new siding color we chose was a little cheaper than the original and they gave us some money back !!!! Lastly we hired them for kitchen, living room, and hallway hardwood floors and a tile floor in our bathroom and back porch area where we keep our shoes. Again jobs turned out awesome, the workers were always awesome ( I bought them lunch, actually I bought all the crews lunch for each job ) The owner Jeff is really nice to work with I personally never had a problem getting ahold of him, so I don't believe that other review. The guy's always on the phone, I think he likes talking on the phone. If he didn't answer right away he called right back, ALOT he just keeps calling. I definitely recommend RJ Properties for any job you have. Sincerely, Mike

Description of Work
I had an addition built on one occasion, then siding, windows, and doors. I also had a hardwood floor and a tile floor installed on another occasion

The work is still going on, but I am writing in response to another review I stumbled across. This customer gave RJ Properties an F and a scathing critique. I can't believe we are dealing with the same company. My experience with Jeff has been the exact opposite on every count. His quote was more than fair; his professionalism is top notch; he responds immediately to any concerns I may have; and you can tell he takes pride in his work. What impresses me is that he makes suggestions that are in my best interest, not with the goal of improving his bottom line. Jeff's employees are all respectful, polite, and diligent. (Example: After scraping and painting the side of my building, they power washed my driveway and front sidewalk.) My project is about halfway done, and so far I am very pleased- Jeff really knows his stuff. I'll write a follow-up review when the job is done.

Description of Work
Exterior painting and an apartment rehab.

He told me the project would take a month and he would be done by the end of April. Well his works hardly showed up and when they did it was only for a couple of hours and they would drink on the job have there girlfriends and wives come down. I paid him up front 38,000.00 (stupid I know) well I got tried of waiting for him to put the rugs in and finish it so I put it back up for sale ,I sold it with out the rug and other work done but know He will not reimburse me back my money or the supplies or give me back my house key and in packing up his tools he took a heavy duty extension cord that was mine. I have call several times he doesn't answer my calls unless I call of a different number and then gives me a line saying he can't hear me. I would never use him again or recommend him.

Description of Work
On Feb 2 of 2017 the house I was in the process of selling caught on Fire. I hired RJ Properties owned by Jeff Cole at 690 Center Rd in West Seneca to due the repairs of dry wall, electric , painting, railings, lighting, rugs etc.

A realtor that I have done business with referred this customer to me. The customer needed repair work on a property that caught on fire while she was in the process of selling it. Based on the insurance write up the customer had, I gave an estimated cost of $40,000. with a time frame of 1 - 2 months (approximately 45 days) to complete. The repair work included minor demo, a lot of drywall, paint, electric, flooring, replace trim, and replace case molding. The customer agreed to the estimate and gave me a deposit on March 30, 2017. The customer, her husband, and daughter were on the job site just about every day. She commented often that she loved the work being done and okayed everything so far completed, so she gave me a second deposit. During the repairs, I sent her photos of the work being done which she also said she was happy with and she gave me a third deposit on April 29. Midway through the job the customer added additional work which was not covered by insurance. She said she wanted Pergo flooring added to the living room and dining room as well as drywall and paint on the kitchen ceiling. She said she would pay for this work herself. The customer said she was happy with the work done so far and it was good enough to have her realtor start showing the property again. After the realtor started showing the property, the customer called and instructed me not to put the carpet in because they have a buyer who does not want carpet. Then a couple days later, the customer called back and said she wanted the carpet put in. I asked if she was sure because once they were cut they were going to have to be paid for. She told me yes, but again called days later because she changed her mind again and didn't want the carpet installed. I decided to tell her I would cover the $1,500. cost for the carpets. There was a balance still owed from the original contract of $2,000. The additional work she added was $1,500., so I told her she could wait until she sells the house and then just give me $500. She still has not paid me that $500. still owed for the job. All through the job, the customer commented that she was happy with the work being done. She told me she gave my name and number to a friend who was looking to have work done on their home. She even said that after this house sells, she wanted me to give her an estimate on siding and new windows on her other house in West Seneca. When my workers packed up after the job was complete, an extra extension cord was mistakenly packed. The day after the job was done the customer called about the extension cord and house key. I left the extension cord on the porch and the key in the mailbox the same day she called. The other complaints the customer has about my workers are unfounded. There was only one day, when an employee was being picked up from the job site by his fiance, that anyone else entered the job site. He had just completed installing the Pergo floors and wanted to show her. The customer was there during this time and raised no objections.

Magic Stone is open for the new season, the fastest way to reach us is to call our office directly at 716-775-5836 we would be happy to schedule your estimate. Super Service Award Winners 8th Consecutive Year! A+ BBB Rating • Magic Stone GC is a Locally Owned & Family Operated Company that has been in Business For Over 18 Years! • Fully Licensed & Insured. We Offer Free Project Estimates to homeowners. Over 30 Years of Experience in the Masonry Repair & Restoration Industry and learned our trade from a well sought-after restoration specialist who has since retired. • Call (716) 775-5836 to Schedule your FREE Estimate or Appointment.  …

When you require professional painting services for your home or office, look no further than Elite Custom Painting. We offer a variety of different complementary services with each contract including: Masking all floors, windows, doors, and hardware Cleaning walls, floors, and baseboards Repairing holes and removing nails Stucco and drywall repair Sanding and caulking Full primer coat and two coats of high-quality paint Full cleanup Free estimates and color samples For more information about our complementary painting services, please contact us!  …

Wing Painting & Wallpapering is a full service professional contractor. We are fully insured and have been in business since 1976, serving Buffalo and the Western New York area. We accept all major credit cards. Special care and attention given to protect all floors and personal property. Additional email - wingptg@verizon.net.  …

Insured
All statements concerning insurance, licenses, and bonds are informational only, and are self-reported. Since insurance, licenses and bonds can expire and can be cancelled, homeowners should always check such information for themselves.To find more licensing information for your state, visit our Find Licensing Requirements page.
General Information
Free Estimates
Yes
Eco-Friendly Accreditations
Yes
Payment Options
Check, PayPal
Senior Discount
No
Warranties
Yes

RJ Properties, Inc. is currently rated 4 overall out of 5.

No, RJ Properties, Inc. does not offer a senior discount.