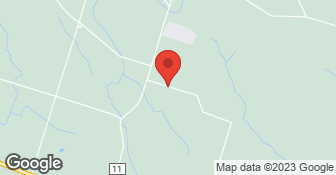 For over 18 years, Gannon Pest Control has responded to the pest control needs of Central New Yorkers. Our knowledge base is strong and deep; our staff and technicians are fully trained ready to serve you. We are a locally owned and operated company, with management committed to and actively involved in the Central New York community. Our technicians are fully trained and our office staff is well equipped to answer any of your Pest Control questions. Our office staff and technicians will ensure that you are fully educated regarding our procedures and all precautions you should take with regard to treatment.  …

Excellent! He was very helpful, informative and entirely eliminated our problem!

Description of Work
Removal of a large yellow jacket nest

We have worked with Dave and his team before. This year was just as excellent as all prior years. They are incredibly responsive when you call. Often within 20 minutes! Always very well prepared when they arrive. They deal with the problem quickly and efficiently. If any follow-up visits are needed, they are very quick to respond. Can't imagine anyone better than this company is.

Description of Work
Applied pesticides for carpenter ants and wasps.

After speaking on the phone, the problem I had was nothing they had any experience in and did not know how to approach it.

Description of Work
I did not end up hiring them.

I would recommend him to anyone with a rodent or bug problem...Thanks, again dave...Linda

Description of Work
I had a small problem with little field mice, getting into the house on the ground level. He scouted all around outside to find entry point and set some traps and has been back twice ...he had caught what he said was the mom and dad of the little mouse family..he re-placed with new traps and should be back again, at which time he will tell me the full price of his service. Made me feel a lot better..

Dave was great!! I called him after seeing his rating on here and reading reviews. We had a very high volume of yellow jackets going in and out of the grooves in the T-111 where it met the roofline. We could hear them through the interior wall of our house and knew there must have been a pretty large nest in there. He came out the first time and used a spray and a dust to kill the bees and the queen, and drilled a small hole on the interior wall to fog them from that angle as well. He ended up having to come back out as the bees were actually up in the eaves (no fault of Dave's, they were apparently cra wling up through the wall- no way to know that from the outside without tearing it apart) and he fogged and sprayed and dusted up there as well. He didn't charge us for coming back out and took care of the problem. He was so nice and pleasant to talk to the whole time he was here, and explained everything he was doing as he went. He obviously loves what he does and did a great job!! I would have him back in a heartbeat, and we plan on having him do our preventative bee maintinence next year if he can squeeze us in.

Description of Work
Took care of yellow jackets that had made a nest in our exterior wall.

Dave was incredibly professional and explained everything to me before he began. He showed me the different types of bees and where they were located. We had quite an infestation! He sprayed the whole house first, then put on his bug suit to spray and remove the yellow jacket nest. Then he walked around the house with a long pole and knocked down all of the nests. I was telling Dave that we just bought the house and went there on Saturday (Aug. 17th) to check things out. We put one of our dogs on the gated deck where she would be and quot;safeand quot;. I checked on her 20 minutes later and she was clawing and pulling at her face and rolling on the deck. I ran to her and saw that there were yellow jackets imbedded in her from one end of her body to the other. They were all around her eyes, on and in her nose, ears and mouth!! My husband took her from the deck and pulled all the bees off of her. I called the vet and drove like a maniac into Camden to get her Benadryl and buffered aspirin as per the vet's instructions. We were truly lucky that she didn't die. He said that all it took was her walking across the deck to aggravate the yellow jackets. It doesn't take much to agitate them. Now she won't ever have to worry about that again. So, for $195.00, we got professionalism, honesty, explanations, a thorough job of removing the bees, and tremendous peace of mind. I don't think anyone can ask for more than that. I would highly recommend Dave and his company to anyone who needed help with any type of bug removal. I know we will certainly have him come back in the Spring just to make sure that we're bee free. Thanks, Dave!

Description of Work
Dave came out and sprayed our entire house for umbrella wasps and removed a huge nest of yellow jackets from under the deck. He also sprayed and removed all of the wasp nests on our garage.

He did a great job explaining everything to me and what needed to be done. He was very polite and professional. I inquired about preventative spraying for spiders and such as well and he gave me his suggestions and was extremely honest about them. He could have very well talked me into spraying right now and I wouldn't have known the difference. Thanks for the professional and honesty! I will definitely be using them in the spring.

Description of Work
He took care of a yellow jacket nest we had inside the garage.

He uses environment safe pest control. I would recommend him.

Description of Work
We used The Bugman Pest Control for pest control services. We have a huge problem with hornets, honeybees and anything else that can build a nest and then attack you. He came out and sprayed the house. He put some sort of stuff behind the shutters outside of the house. We have little mounds of sand and couldn't figure out what it was and he told us that that's where the sweat bees come from. He actually sprayed the front yard free of charge for us.

A very pleasant young man was here when promised, spoke to me about particular areas before spraying, suggested waiting to enter the deck closets for a day to let the spray work, and promised to return if called about a continuing problem. He also let me know when he left that he had finished.

Description of Work
sprayed the foundation of the condo unit as well as the deck closets for wasp nests.

Excellent work. He was professional, prompt and courteous. He has a guarantee that he'll redo it at no charge if the problem recurs, but we did not need to do that, as it was resolved the first time. I'd definitely use him again.