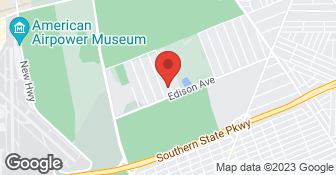 We were having a problem with our AC, so we called All Season. They sent Andrew to our house. He was so Nice. Andrew went above and beyond to make sure we understood everything and he explained everything in detail. I can't say enough nice things about Andrew. He's Honest, Professional and Trustworthy. Thank You Andrew! (our AC unit is 3 years old. When installed, the price was good and excellent customer service). If you want an honest company then call All Seasons. You won't be disappointed.

Description of Work
Check my AC

Description of Work
Corrected an install from another company who I was dealing with for 2 years to get them to do the right thing and make repairs. Finally obtained an attorney, got Mitubishi involved who highly recommended All Seasons to do the corrective work on two ductless heating and cooling systems. All Seasons was AMAZING!!! I had a wonderful experience and HIGHLY recommend them to anyone looking for a HVAC company!

Staff was very professional and installation was done very quickly and was well coordinated with our staff.

Job was completed in two days and all work was satisfactorily completed.

Installation was quick and neat.Quality of work was excellent. All materials and extras were included (e.g., new pans, dual drainage with alert, and pads for the outside units ). Great job. After installation, the efficiency seemed to be below par - they cam the next day and charged up the system. Have dealt with the company for several years now.

Description of Work
Installation of two complete Carrier Infinity central air conditioning systems and Carrier air purifiers. New Duct work for one of the systems. Included new model remote access touch thermostats (these were installed after the initial installation, as the new model thermostat was not out yet. They helped by identifying significant rebates from carrier and LIPA.

The outside compressor had to be replaced 5 years after the original installation. The warranty was up, and I had to pay for a new unit. I asked for a different brand than the original, which they supplied. Then I found out from an installer that the same company makes the new unit they put in, so they weren't exactly honest with me. A year later, the inside (attic) unit broke, and 1/2 of that had to be replaced. This was also post-warranty and a very costly job. I don't know if I can blame the company for these two major breakdowns, but in light of the other problems I had with their installation, I have to wonder (do they sell damaged units or does shoddy work responsible for the breakdowns?). The other major problem I had with this central air system was the drainage from the attic unit to the outside. The drainage tubing blocked up twice, resulting in the pan filling up with water, spilling over and causing flooding into my daughter's room. The plaster ceiling in her room collapsed, requiring major repairs (twice!). After the first repair, All Seasons blamed the blocked drainage and backup on my gutters, which they said had filled up. I accepted this as my fault, which it really wasn't, since they hadn't installed a secondary drainage pipe. They then installed the backup drainage pipe. Despite this, the pan overflowed a year or two late. Fed up with All Seasons, I called in another AC company to take over. They found the problem to be an improperly pitched drainage pipe that ran through a difficult to access part of the attic. All Seasons had installed this improperly in the first place, and failed to detect the problem after the first flood, which resulted in the second flood and collapsed ceiling. Needless to say, dealing with this company has caused me a great deal of anguish and expense, and I am glad to be rid of them Stay away from them!

Description of Work
All Seasons installed central air conditioning in my house in 2002 and maintained it until approximately 2010.

From dust, dirt and dander to debris and allergens, any number of potentially harmful particles can get trapped inside your duct system. A dirty duct system will continue to re-circulate this contaminated air and, in some cases, it can escape the system and be distributed inside your home. In other cases, it can stay in your ducts and continue to attract even more dust, increasing the amount of contamination day after day. Our professional air duct cleaning system features powerful vacuum equipment to reach deep into your air duct system, remove the contaminants and help get a dirty duct system working efficiently again.  …

We are a small A/C Heating business that offers personal service unlike the larger company's. Arthur Radichio the president and Master installer and service tech, and has been very active within the industry for over 30 years. As a teacher in BOCES, and giving training seminars and proctoring certification testing NATE and HVAC Excellence. Has five U.S. patents one in England one Germany and one in Canada. Member Levittown Chamber of Commerce. Full details of Arthur Radichio on web site..anrtechnical.com  …

How is All Seasons Air Conditioning overall rated?

All Seasons Air Conditioning is currently rated 4.4 overall out of 5.

What days are All Seasons Air Conditioning open?

All Seasons Air Conditioning is open:

What payment options does All Seasons Air Conditioning provide

No, All Seasons Air Conditioning does not offer eco-friendly accreditations.

Does All Seasons Air Conditioning offer a senior discount?

No, All Seasons Air Conditioning does not offer a senior discount.

Are warranties offered by All Seasons Air Conditioning?

What services does All Seasons Air Conditioning offer?