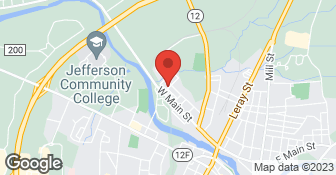 My hot water heater went out and I was getting ready to leave town for 3 weeks. I wanted to replace it with a tankless. Not a popular choice in this town. They replaced it right away. I got an estimate before the job but didn't pay anything upfront, they had no experience or refferals for me. I came home from my trip and decided to replace the furnace, so they did that. They also advised me about a low interest loan program with the state I didn't know about. The summer was so hot I decided to add central air too, they did that. They accomodated my requests patiently. The furnace and ac jobs were worked into their busy schedule throughout the summer. I never got a bill or paid anything upfront. The Cowles and their staff were easy to work with and talk too. I am fairly picky and not always easy to work with. I would definitely hire them again.

Description of Work
I had a Navien tankless hot water heater installed. A Broan furnace and central air conditioner installed.

Overall it was a bad experience, but at the time we did not have many options available. Energy audits were fairly new back then. Our first contact with Cowles, the energy audit and estimate went fairly well. The man who did them was professional and prompt. We felt comfortable with him, so we hired them. Cowles' workers did the sealing of the house with their spray foams, caulk, and hard foam boards. They did a fair job, although a lot of the areas they placed foam were pretty messy. We can still feel air blowing in around a lot of our outlets so we're not very impressed with that part. Since this house is from the 1890's we weren't expecting a totally air-tight house. By far the worst part of our experience, and the lion's share of the cost, was the insulation. Cowles subcontracted with Insulex to do all the blown-in cellulose insulation. Obviously, we had to trust that Cowles was hiring a good company, and they didn't. If we can find a listing for Insulex, we'll definitely put a separate review in for them. The insulation process required removal of some of our siding, drilling holes in the clapboard underneath, blowing the cellulose (ground up paper) into the empty walls, plugging the holes, and replacing the siding. Unfortunately, this work is almost on the honor system. Unless you're standing with them all day, you have no idea what they're really doing. They said they did the whole house, and we and Cowles assumed they did. By the way, the Insulex guys were NOT terribly professional. They didn't show up when they were supposed to several times, so we were contantly calling Cowles to track them down. After the sealing and insulating were supposedly done, a different Cowles guy came to do the "post-work" blower door test. He did it, but clearly didn't like the results he was getting because he kept saying the machine wasn't working right. They actually did more "sealing" after he did the test, and then he said it was all set. Here's the best part: A year or so later, we renovated a small bathroom and our contractor was surprised to see that there wasn't any insulation near the top of the outside wall (he was only removing some of the ceiling). We assumed that it just must have settled or that they just missed a little spot. A couple months after that a contractor had to remove an entire wall of plaster from my daughter's bedroom. Weren't we surprised to discover that there was literally 3 INCHES of insulation in the 9-foot wall! We took photos and promptly called Cowles to complain. At that point they told us they'd had problems with Insulex and they hadn't been able to use their preferred insulator with us. After about 6 months of complaining, Cowles finally arranged for someone to come to our house with a thermal camera. A different insulation guy came along and he made notes of places that appears uninsulated. A few weeks later he came back with his team and spot-fixed the areas they had been able to locate. We do hold Cowles responsible for the bad job that their subcontractor did... after all, you're only as good as the people that work for you. It took us tearing down a wall to discover that we'd been ripped off. And it certainly shouldn't have taken months for Cowles to try to fix the bad job that was done. Needless to say, we'd NEVER recommend either of them.

Cowles & Co Contracting is currently rated 4 overall out of 5.

No, Cowles & Co Contracting does not offer eco-friendly accreditations.

No, Cowles & Co Contracting does not offer a senior discount.