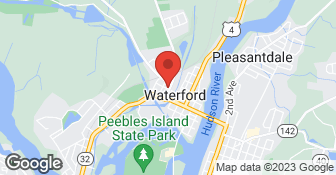 The provider completed a portion of 1 of the 2 jobs hired to perform. The repair of the driveway and the garbage pail area was completed but the old portion of the driveway was not sealed as agreed upon. He was more interested and concerned with getting paid than the actually quality, professionalism and doing the jobs hired to do. There was no color indicated on the contract, but he was handed a sheet of the colors used on the patio when installed. We knew it would not be an absolute match, however the choice he decided to use was a much darker color. The border had a little different version of the color of the patio which he completely ignored. When we asked to discuss what we could agree to correct the issue, he became

Description of Work
Larry and his guys tore out our 15 year-old driveway. They did a great job leveling, compacting, using fabric, gravel and laying two different asphalt grades on our much larger driveway. Their price was considerably better.

Larry was punctual and friendly and price competitive. The job went as expected and we are now enjoying a new driveway.

Description of Work
We had a gravel driveway and they paved it. They dug away the former gravel and graded it properly, then applied the base and top coats of paving material.

Overall, it went extremely well. All of the neighbors were on board with Larry and the crew doing each segment at once ie: sidewalks first for everyone, then steps, then driveway. We were given updates as they went along. Half payment was expected after the beginning of the job then the balance only after the work was completed. Larry suggested some changes during the job to accomodate our living situation and it worked out better than what we originally asked for. I will definitley use this company again!

Description of Work
Larry and his crew removed the old concrete sidewalk, stairs and asphalt driveway. They prepared the surfaces for the pouring of the concrete by setting the forms for the new sidewalks, arranging for new pre-cast stairs and leveling the driveway for the new asphalt. They completed the work over a period of a couple of weeks because one job on our street turned into 5 after other households saw the great work that was going on! After everything was completed and hardened, he came and his crew came back to tweak a few things to make everythnig perfect!

Pace Lawn and Landscaping specializes in landscaping, lawn care services, and snow removal. We are committed to customer service with over 10 years of experience in the industry. Our number one goal is customer satisfaction.  …

Albany Hardscaping & Landscaping LLC is a full-service lawn and landscape company that offers services that include the following: -Mowing & trimming -Paver & patio Installation -Planting shrubs & Flowers -Spring/Fall clean-ups -Tree cutting -Pressure Washing and much more. We are a team of professionals that are committed to meeting every customer's need. We are detail-oriented and our work is what stands out. We are an owner-operated business. My team and I come with many years of experience in hardscaping and landscaping.  …

GRANT PAVING & CONCRETE IMPRINTING is currently rated 4 overall out of 5.

No, GRANT PAVING & CONCRETE IMPRINTING does not offer eco-friendly accreditations.