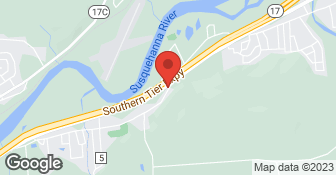 Co-owners Tim Kiefer and Jim Randall bring over 38 years of experience in the building and remodeling business as owners, foremen, production manager, estimating and sales, and design and administrative positions. Let us bring our experience, knowledge, multi-year award winning craftsmanship and professionalism into your home as construction company owners and staff that pride ourselves on integrity, treating your home or place of business as if it were our own. Our goal: Raving Fans! Winner of the Binghamton Press and Sun Bulletin's Reader's Choice Award for Best Home Improvement Contractor for 2016. Follow us on Facebook! Additional phone - (607) 321-1631....

It was a positive experience. We’re very pleased with our new bathroom. They were professional, neat, & punctual. We had a time constraint & they completed the work on schedule.

Thank you! It has been a pleasure serving you!
5.0

I received a phone call back within hours of my call. Although they cannot take on any new work because of Covid 19 until after the first of the year, I can only say they made a wonderful impression on me-- consistent with the high marks I found for them on Angies List. Most of the calls I have made to contractors have not been returned. This is a nice company. I will call in January. Thank you

Thank you! We look forward to another opportunity to hopefully serve you!
5.0

Our experience started with Tim Kiefer one of the owners of Kiefer-Randall coming to our home to give a estimate, he provided proof of insurance for his company and his employees no sub contractors were utilized. He also provided references. Tim spent a large amount of time with us, looking at what needed to be done, he also took time to look at our home and our style. Once the plan was completed he dealt with the insurance adjuster and suppliers. This took so much pressure off of us. Tim supplied us with a physical address for his company, as well as his phone numbers in the event that we needed him day or night. My husband has been involved in the construction business for over forty years he is the one who originally built our home. I have been involved with construction for over thirty years, We have never witnessed a owner of a large company supply customers with home phone numbers . The team arrived on the first day, after that we really only needed one installer. The slate tile flooring and marble tiles for the walls are perfection. The shower unit ( all glass) and the vanity looks and works wonderfully. I would recommend Kiefer-Randall for any project. We will be remodeling our kitchen soon, this is the only company that we will utilize. They may be a little more expensive than the guy in a pickup truck, but their quality and guarantee is worth it. If you would like pictures, we would be happy to provide them.

Thank you for the very kind review. We so appreciate your business!
5.0

I've used them several times before on small jobs. This was a fairly complex and fairly high-priced job using unusual siding (Cellular PVC), an unusual structure and custom windows and doors. Also subcontracted roof work. The job manager was very responsive and willing to answer all my questions as well as address my concerns. I expanded the scope of work slightly, they ran into unforeseen problems on certain issued (solved them) and they handled it without issue and in a timely manner. The work crew was professional and courteous, also fielding my questions and passing along concerns. If you're reasonable, they are top notch and you WILL get your problems solved. Expect to pay a bit more for them but again, I consider it worthwhile given their reputability and what I see as a guarantee of (reasonable) satisfaction. My recommendation, hire them, be reasonable and don't penny-pinch. They charge more for a reason.

Thank you for your loyalty and business!
4.0

Excellent customer service. Prompt responsiveness. Highly professional. Work was completed to my satisfaction and problems along the way were addressed professionally. I have no problem hiring them again.

Thank you for hiring us yet again for your remodeling needs!
5.0

The repair was actually completed before I got the contract in the mail! The work crew noticed a loose board on a 3rd floor window and repaired THAT ‘just because.’ Cleanup was thorough and we are snug and dry.

Thank you for your repeat business! It was our pleasure to be or service to you again!
3.0

It is, regrettably, so hard to comment on such an undeserved review from one of our valued customers. First, these folks sang our praises throughout the entire job... sang praises to my Production Manager when he contacted them daily for debriefing; sang praises to our craftsmen assigned to their project by telling them they wanted us to come back to do more work for them because they were so pleased; and sang praises even to me, a co-owner, saying how much they were pleased with the quality of work performed. To say now... after voluntarily paying in full ... (which, per our detailed contracts, is not due until the customer is 100% satisfied with all aspects of the work performed and products provided) ... to say now that the "wrong size windows (were) in (the) contract" is borderline preposterous. Every page of our very detailed contract is and was read to the customers during the signing of the contract to ensure this very thing does not happen... not only that, but the customers' own hand-written initials are literally on every page, again, signifying that the contracted-for specifications, are indeed agreed upon. Also, the customers had the contact in their possession for almost a whole business week, going over the details and scope of work, ensuring understanding, (rightfully so) before ever signing it. Additionally, our company does an orientation walk-through with the customers, salesman, and production manager before we start the project, where we verify verbally AND in writing, yet again, every line of the scope of work, before we ever even sink one nail, to ensure that nothing was lost in translation. That not only happened, but the window sizes were specifically confirmed, as well as having both customers physically see my production manager demonstrating how big the windows were going to be, as well as holding up tape measures and confirming, again verbally, what had already been twice before confirmed in writing. The "request in writing" to correct the window came AFTER the special order, customer confirmed, non-returnable windows were already installed, which, incredulously, came after the final payment was voluntarily rendered, praises sung, more work promised, and only after several "temper-tantrum" emails were sent to me by the now unsatisfied customer, that, to his credit, did apologize to me for being so rude. Ironically, both customers were home and present when the windows were installed and actually told my Production Manager that very day after the windows were installed, that everything was going very smoothly. He was not, and never was ignored. We spoke several times, corresponded via email many times regarding this, as well, and I even reached out to offer him some consideration simply out of good faith. The customer chose to stop communicating and go this route after basically threatening my company with a bad review if I didn't do exactly what he wanted... which was give him a full refund on non-returnable windows that he previously authorized on several occasions. We love and respect our customers, and will gladly take a loss on a job if we screwed up, in order to ensure our customers have a positive experience with our company. We have hard copies of all correspondence with this customer regarding this issue. It happens very rarely to Kiefer-Randall, because we do, by nature, bend over backwards to please our customers. The poor grades this customer gave us do not reflect the experience they shared that they had with us during the whole project. I hope our future customers read the overwhelming majority of glowing reviews and overtly positive experiences they've had with Kiefer-Randall, and see this for what it is.
5.0

It worked out great and they are wonderful. They were great to work with from beginning to end and the foreman was here almost every day and they are very professional.

Thank you so much! Please call on us again!
5.0

It went great!! They were in contact with me every day- filling me in on the progress from the day and their plans for the next day. Their work is second to none! Of the highest quality and top notch.

We appreciate your business!
5.0

I still have to get back to them for a an itemized quote. They were very responsive and came out in 2 or 3 days.

Description of Work
They gave me a quote for a new roof.

We hope we can do the work for you!

Give us a call today to discuss your remodeling project(s)