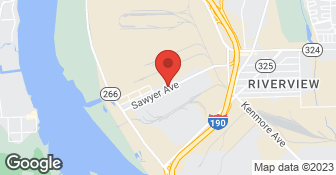 Tina was wonderfully. Installer came and replaced chain on a sears garage opener. I have a very heavy door and the garage opener is still working after nine years.

Tina who took my order had great customer service.. Very knowledgeable and could answer my questions. I had one other estimate. Adams Door came in a couple hundred dollars under the price of the other estimate for the exact same door. The doors look beautiful. I did not get the garage door opener. I really do not need for these doors open and close so much more easier than the old wood doors. I wish I did this years ago!

Description of Work
Install 2 steel garage doors with the look of cherry wood with windows. Also removed and took away 2 old wood doors.

They did not show up on the scheduled day, but did come on the following day on time. The installer was friendly and very professional. We were very satisfied with the completed job. We would definitely use this service again and recommend them to others.

Description of Work
Replaced rollers and hinges on garage door.

No comment, everything was very positive as indicated above.

Description of Work
Garage Door had come off track, dangerous situation with springs. Repairman came fixed, still works well, was courterous and serviced both doors for greasing and maintenance.

He was pleasant, on time and provided excellent service. He explained everything he was going and was very informative.

I couldn't have asked for better service. I called around noon. The person on the phone said that they would be able to get to me the next day and would call later with a time for the next day. Less than two hours later, they called and said they had someone free and could come right away. I explained that I had to go out to a job but that the door was open and they could come without my being there. They said they would and when I got home from my job several hours later, the door was working perfectly and there was an eminently reasonable bill tucked into my door. I would highly recommend them as prompt, friendly, professional and fairly priced.

Description of Work
Our garage door was stuck open even when disconnected from the electric opener. Adams Door technician came and repaired it so it is now working better than it ever has.

One of our garage door springs broke on a Thursday night. I called Adams' Door straight off and left a message. I heard back from Adams early Friday morning and by 9:30 AM that day the job was done. A spring costs only about $20, so I had both replaced, and one of the pulley wheels ($5.00) was obviously in need of replacement, too, so I had that done as well. I have to commend Adams' for the quickness of their response, reasonable price, and competence of their repairman.

No problems, start to finish.

Description of Work
Adams Door came and repaired our garage door opener. They came on time, knew what they were doing, were personable, and the price was fair.

It went very well. I received a call the next morning after leaving a message after business hours on the previous day. Technician was able to come out the same day to make the repair. Prompt and courteous.

Description of Work
Replaced garage door hinge after it came off and jammed into another hinge making the automatic door unable to work.

I didn't want to deal with it, and so I found Adam's on Angies . . i called them after 5pm on Tuesday and left a message. I called again first thing on Wednesday, and they said they'd tried to get out that day, but couldn't promise me. At the end of the day Wednesday, they called to say that they had me on the schedule for first thing Thursday. The service tech showed at 9.30am, he did his thing, even a little extra service to lube the door. He was nice guy, and worked efficiently. I paid him the $70 he required, and he was on his way. Their total time on site was about 15-20 minutes. I'd recommend them and would use them again.

Description of Work
The arm on my automatic garage door opener came dislodged from the garage door . . two screws fell out. The arm needed to be re-attached to the door.

Once the problem occurred, I called Adams because we had been satisfied with their work at our previous house several years ago. When they said it would be four days before they could make it out, I decided to get an estimate from another company. That company wanted to replace all of the cables and springs for $500 and recommended getting the bearings replaced for another $250. I declined and waited for Adams. I was glad I did, as they didn't recommend replacing anything but the cable, which they did quickly for $85.

Description of Work
A cable snapped on our garage door and the door had become cockeyed and jammed. I had to wait several days for Adams to be able to come out and take a look (thank goodness the car was not *in* the garage), but once they arrived they fixed it quickly and at a reasonable price.

The job seemed fairly routine for them. They were in and out in no time. The gentleman was polite and arrived on time. He was personable, professional, and he answered all of my questions. The price was reasonable and the service was great. We couldn't have asked for a better experience with a service company.

Description of Work
We had them come out and replace one of the springs on our garage door. We have a one car garage.

I thought Adams Door Co. was overly concerned that I come back to them for business again. So for that reason they seemed to go out of their way to please me, including giving me a great price. It was a first-class job, too. It is just a good company.

Description of Work
Adams Door Co. replaced a spring on my two-car garage door. I purchased the door from them many years ago.

For close to 30 years, Modern Window has been synonymous with premium, custom window solutions for Western New York and Northern Pennsylvania. When you add our ability to make yours a more eco-friendly home with the fact that we specialize in 100% American-made windows, it’s clear why this local, family-owned company has found success for so long. Call 716-873-8800 for your free, no-obligation appointment today!  …

ADAMS DOOR CO INC is currently rated 5 overall out of 5.

No, ADAMS DOOR CO INC does not offer eco-friendly accreditations.