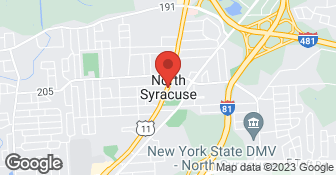 KC Curb Appeal was established in 2009 by a landscape professional who had experience in Landscaping, Hardscapes, Lawn Mowing & Plowing for over six years. KC Curb Appeal has been a successful growing small business in Central New York. With little advertising the company has grown by word of mouth. KC Curb Appeal thrives on quality work and making sure the job is done properly the first time. Our company offers free estimates. Please give us a call today!...

First off, it was a pleasure having this company work on my property. They arrived on time, I was introduced to the crew and after a brief review of the job they diligently got to work. They completed the job beautifully after several hours and it appeared that they went above and beyond my expectations. I would/will defiantly hire this company again!

Description of Work
I needed a few planted areas replaced with grass(seeded), a hedgerow thinned of wild growth, weeded and mulched, some diseased shrubs/small trees removed and grasses transplanted to cleared area and mulch applied.

Kevin came to take a look, made some recommendations of what he would do, took some measurements, and said he'd get back to me with a quote. 5 days later, no quote. Called, got no response to my message. 2 days later,called again, got no response to my message. Gave up and started looking esewhere. The day after I posted this review, Kevin emailed me the long awaited quote, which I ultimately accepted. Just a few days before he arrived to do the work, I told him I wanted to increase the square footage of my lawn restoration project, and he agreed. When the day came, he arrived with 3 great workmen, land ripped up my old lawn, tilled it under, added compost and topsoil, and seeded it along with a starter fertilizer and a moisture retaining mulch compound, and reseeded. All the work was done professionally, and in one day for about a 5,000 sq foot lawn. Now , about 10 days later, the lawn is coming in, and the neighbors have commented how good it looks so for. So, for his initial responsiveness, I'll give Kevin a B rating, but for quality of work, it definitely rates an A rating.

Description of Work
Lawn restoration after mine bit the dust after hot, dry summer

KC Curb Appeal did a great job. After contacting them with my request for a quote, Kevin got right back to me. He came over to the house and looked at what I wanted done. He said they could do the work in 2-3 weeks, depending on the weather. He got back to me via email in about 2 weeks and set up an appointment for the following Monday (6/1/2020). He and his crew arrived on time and applied 9 cubic yards of mulch to my landscaping. They did a great job -- the mulch was evenly laid down, they did a very neat job and cleaned up before they left. It took a crew of 4 about 2 hours. The total cost for the mulch, delivery and labor was $826.20. I will definitely be using them again.

Description of Work
Added Mulch to My Landscaping

The initial quote that I requested from Kevin was for a spring clean up of my yard. When he arrived he was very professional and pleasant, offered a reasonable price and we booked a day for the services to be completed. During the time between the initial quote and day of services I also ended up scheduling with Kevin to remove some junk from the yard, remove a tree and complete lawn work at my fathers house along with my grandma's house. The day came where he was supposed to do the work and he did not arrive - after attempting to get a hold of him all day he finally responded that the work had been rescheduled. Him an his team arrived the morning of and did an OK job of the clean up, they used blowers for leaf removal and although it did a OK job, there was still left over things. Upon completion of the job I realized that Kevin had not removed everything he said he was going to in terms of the junk in the yard - When I contacted him he said that his team must have missed it and they would circle back around to get the remaining things. Kevin completed the work at my dad and grandma's house without issue. Unfortunately the same experience happened with the tree removal where they didn't show up when they were supposed to. They did a great job removing the tree but after two weeks of trying to get Kevin to remove the junk from the yard with no response, he finally contacted me to pay for the tree removal. When I told him that I didn't feel comfortable paying until the job was done, he became very upset. He returned the following day, removed everything except the biggest thing, I paid him and he left. At first I was really looking forward to working with Kevin. He was very nice, I recommended him to family and friends with pride. However, the follow through was not there. Kevin repeatedly used the excuse that he had a lot of commercial properties he was trying to keep up with and that is why things were not done in a timely manner - although I understand we all have obligations, don't take on additional jobs if you can't give them your full attention, especially when they are paying you full price.

Description of Work
Spring Clean Up

[Member Name Removed] - You did in fact contact me through Angie's List to provide you with a quote for a spring clean-up. I looked at your property and gave you a quote by email. I never met with you in person and you never responded to my email. I DID NOT DO THE WORK FOR YOU. So thanks for the very descriptive bad review that should have been given to the person you hired to do the job. This is not how I do business and it is not how I treat customers. I will contact Angie's List about taking this down.
5.0

KC Curb Appeal responded quickly, sending over someone to do a very reasonable estimate. After paying for half of the work up front, the work was done timely and exceptionally. I will not hesitate to go back to them for all my lawn and landscaping needs.

Description of Work
I had a large bush in my yard that I needed removed.

Bought a house a few months back in desperate need of some landscaping done. Didn't have a specific idea in mind, but Kevin ended up coming up with something nice and within a limited budget. Very happy with the results. I've received several compliments on it.

Our landscaping was a complete mess and we needed the ground leveled, trees removed, stones removed, everything shaped and lighting put in. They were on time everyday and worked super hard to get everything done. We also had a million questions and they answered every one if them and even switched out some plants to suit our needs. They were very professional and walked us through everything they were doing and how to care for our new plants. They went above and beyond and even added some additional drainage to ensure everything flowed properly. The results are spectacular and we are so proud of our home now. If you don't go with this company for your landscaping needs you would be making a mistake.....they are awesome!

The guys were hard working and professional. Results were beautiful.

Sorry it took so long to write a review! They did a thorough, excellent job and I thought that it was a great value.

They did excellent work. The lawn already looks so much better even though the grass has not yet regrown. The job was done very professionally, with detailed attention to creating a sloped gradient away from the foundation of the house, removing bushes and replacing them with a mulch surface, patching areas damaged by excavation machinery, and sewing grass seed very evenly across the area of lawn to be restored. I highly recommend KC Curb Appeal to anyone looking for high quality lawn and garden work at a reasonable cost.

Description of Work
Leveling, addition of topsoil, and reseeding of lawn after excavation