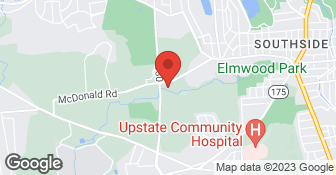 I thought the work was fine. I paid $2450. Not long after work was done I could see new long cracks. I called immediately. I was told by the owner that the new cracks were "not a problem", and that he "absolutely guaranteed" the chimney. Really? Were the original cracks that needed reparging for $2450 "not a problem"? What did I pay them for? Didn't matter because nothing was done anyway. A couple of years later the company called me (wanting to get some business) to make a pitch for cleaning the chimney. I told them no, that I was not happy with the cracks and did not want any further service. The employee was surprised, apparently told the owner and he wrote me a letter. He wrote "these cracks are show up in 50% of parging projects we do and are strictly cosmetic". He wrote that "they are not a structural threat to the long term stability of the job, so we leave them alone". He said "he would be happy to repair them". Really? Nothing was done. Now I called again because water has dripped down the chimney bricks in my living room! Now I was told that was because of a roofing issue, not the chimney. They recommended a roofing company. I call the roofer, he came, he climbed up and checked the roof and chimney. He said "the chimney has a DEEP SERIOUS CRACK. I again called the chimney people and told them what the roofer, that they recommended, had said. I was told that a man would be sent over to inspect it. THAT WAS A MONTH AGO. AGAIN, NOTHING DONE.

I sent a request through Angie's list for a quote on September 16, 2019 and never received a call or email or any kind of response. Not a good way to do business. If you were too busy or not interested, if you are really a professional, you should have contacted me. At this point in time, don't bother because I would not hire you anyway.

We do not book appointments through Angie’s list Only by contacting our office directly 3154695004 Sorry for any confusion
5.0

They came, took pictures, and said that no repair was necessary.

Description of Work
The chimney needed to be checked to see if it needed repair.

Raymond was the technician on site and was very thorough, neat and clean, and gave me specific ideas on how to repair the small hairline crack in back of the hearth. I followed his advice and it worked perfectly. He was punctual and the price was reasonable for the services performed. I highly recommend the services of this company.

Description of Work
Chimney cleaning and camera inspection of the flue

Jock and his team are always top notch

They did a very good job and explained the process. Will definitely be using them again for all my chimney issues

Description of Work
Cleaned and sweeped my chimney

Very well. The technician Matt was friendly and professional and a pleasure to have in my home. I felt the price was a bit high compared to what I have paid in the past, but I guess I'm willing to spend a little more to feel comfortable that the job was done correctly and also to feel comfortable with the person who is working in my home.

The chimney sweep was professional, courteous and knowledgeable. It was a pleasure working with this company.

Excellent work, The workers were civilized and acted like professionals. Very Satisfied with everything

We are a small business specializing in custom tile installations. We have over 20 years experience and are fully insured. We work with all forms of tile from Ceramic, to Porcelain to Natural Stone. Backsplashes, Floors and showers. You name it, we can tile it. We are an A rated BBB Accredited Company.  …

Bonded
Insured
All statements concerning insurance, licenses, and bonds are informational only, and are self-reported. Since insurance, licenses and bonds can expire and can be cancelled, homeowners should always check such information for themselves.To find more licensing information for your state, visit our Find Licensing Requirements page.
General Information
Free Estimates
Ask for details
Eco-Friendly Accreditations
No
Payment Options
Check, Visa, MasterCard
Warranties
Yes

Expert Chimney Services Inc is currently rated 4.9 overall out of 5.

No, Expert Chimney Services Inc does not offer eco-friendly accreditations.