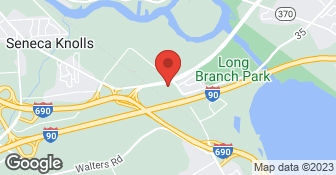 Wasn't impressed at all. Also got the impression they were too busy for the work in my house. They missed every timeline they ever game me with minimal communication. The way I guess it works is they manage the house like a project and contract the fixes to other companies or people. Or they have their people they reach out to to fix things. The good part is most these guys were actually good. I did not have too much of a complaint on the physical work that got done. The work looked very professional. Loved the Tile and Carpet guy. The person who came in and did electrical and installed the baseboard was kind of a night mare. But apart from that every thing else went ok. My biggest heartburn is CNY Fire management itself. And I'll probably never use them again. I truly never ever felt that they cared about the house, i saw these guys once during the whole process. And sent emails back and forth, barely spoke to them. They work somehow got done.

[Member Name Removed], thank you for the feedback. I am concerned that your not happy with our service but did not inform us of any dissatisfaction. PLEASE contact via email at jeff@cnyfire.com so we may address any issues you have with the repairs performed in you home. Thank you for taking the time to notify us.
5.0

There estimator was here the same day we called our insurance company. The clean up crew started the next morning. It took 7 to 8 weeks to complete the entire job. The end results are wonderful. The demolition, clean up, and remodel crews were hard working, professional, and pleasant to work with. We highly recommend their work. Our insurance company paid for all the work so the price listed above is approximate.

It went awesome.They were very meticulous with there work. Made sure vinyl was pattern matched at seams. Seams are now invisible. Double coat of paint, caulked baseboard, cut angles perfect. It really looks nice. Took them three days for tear out and rebuild. They arrived at 8 am every morning and left around 4pm. They handled everything with insurance company and my insurance company said they guarantee that work he does for two years. They were friendly and very professional. the boss arrived the last day to do a walk through and inspect work. made sure I signed off on everything they did. During the work he contacted me everyday to check on how the men were doing and to see If I had any complaints. They were great. I would recommend they to everyone. You should have seen how careful they were when putting back furniture, i didn't have to lift a thing. Great job.

On June 8, 2012, I asked the company's owner when they would be starting on the house. He said once the permit is approved, they can start; he said probably the 18th or 19th of June. I met with the architect,that day. (it's required for jobs above $20K). I showed her around the house. It took an hour to measure the rooms and took pictures. She said she would submit the plans the following Monday (June 11). During that week, I made numerous attempts to contact the claims representative for the company. On June 27, I received a call from the claims representative, and from the owner, a day later,as I was heading back home from a vacation that the permit was approved and they would start work. I was infuriated, I called them back and we didn't speak until July 2. When I asked the representative why it took so long to get the architectural plans and permit, his reply was "I don't know." Throughout the start of work on July 3 until its completion on October 26, the representative kept saying it would done soon. They said the upgrade in the electricity would take 10 days; it took three weeks. There were a couple of occasions where I would arrive at the house and no one was working. In late September, there was an issue over the installation of the vinyl floors. The installer said the vinyl rolls would be cut and installation would take place on October 2. On that date, they didn't arrive, I called the installer who said they were at a job which took longer than usual, but would be there, the next day. On October 5, I went down to my house and noticed the vinyl wasn't installed. One of the contractors for another job said the installer had issues with with the placement of the stairs, but the stairs weren't there. I called the installer and had the speaker phone on. The installer accused the other contractor of not telling him when the stairs would be installed. The installer said he would install the floors in a couple of days, but didn't. The other contractor was livid. The following Monday, October 8, I contacted one of the contractors to see if the floor installer came, he didn't. I called the installer to tell him if he didn't arrive at my house within the next hour, he'd be fired. He called back to say he'd be there. The next day, I sent a signed certified return receipt to CNY Fire & Emergency with a "Stop Work Order." The next day, I contacted the representative telling him if the installers didn't come, they were fired. Within an hour, the company's owner was at the house, he was very accommodating telling me if I had any problems to come to him. (Something he should've said in the beginning.) The vinyl floors were installed by October 12. At the end, on the 25th of October, the representative had the unmitigated gall to comment, "We had our delays, but that's past us." It shouldn't take all this prodding to get people to do their work.

Description of Work
Their contractors upgraded the electrical capacity of the house. They removed wainscoting, some stairs and walls and replaced them with new materials. The floors were replaced as well as the kitchen cabinets. Wallpaper was removed and painted over(at my request).The furnace was replaced.

We had a 70' tree fall on our roof. CNY Fire is the approved contractor through our insurance company, USAA. It took them a while to come out, when they did, they performed an estimate for our siding, gutters, and roofing. They sent the estimate directly to the insurance company, did not provide us a copy or go over it with us. We called several times to have them come out and provide a copy, we had to complain to our Insurance company to get them to come back out. Several weeks later, they came out, were very professional and explained the quote. They had left off several items and provided an estimate on the roof without actually inspecting it. We asked them to provide 3 options as well as to add the additional damage. That was over a month ago. Neither our insurance company or us have heard back from the company. Our insurance company told us to go ahead and get quotes for other vendors because of the non responsiveness of CNY fire. A company that does not provide adequate or thorough estimates. And does not take the time to explain them to their customers will not receive business from me. I DO NOT recommend.

Insured
All statements concerning insurance, licenses, and bonds are informational only, and are self-reported. Since insurance, licenses and bonds can expire and can be cancelled, homeowners should always check such information for themselves.To find more licensing information for your state, visit our Find Licensing Requirements page.
General Information
Free Estimates
Ask for details
Eco-Friendly Accreditations
Yes
Payment Options
Check
Emergency Service
Yes
Warranties
Ask for details

CNY Fire Emergency Services is currently rated 4 overall out of 5.

No, CNY Fire Emergency Services does not offer warranties.