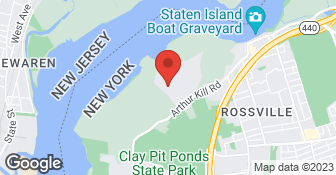 Since he had installed it, the glue has started to come off. I called him about this problem, and he said he would come back a week later. He never came out and I have never heard back from him. I gave him an extra week, because of Hurricane Sandy. I have called and left messages, but still have heard nothing. He is a very nice man, but we do really need this work to be completed before Thanksgiving.

Description of Work
He installed a mirror for us.

When The customer first called, I had told her we would be there the following week but then Hurricane Sandy hit and we were inundated with emergency window repairs for residential customers in Staten Island's hardest hit areas. When the customer called a second time, I had explained the situation and reassured her we would be there before Thanksgiving. The repair, re gluing a 2" bevel strip, was completed on 11/19.
5.0

Did not realize what a difference the door would make. Whole bathroom looks so much more finished and beautiful. Heavy duty glass and a wide door makes it feel secure and luxurious. The installers were efficient and courteous which makes a world of difference. I was pleased and wd be happy to work with them in future when we redo the children's bath.

With over 20 years in the window business, we are here to help you with all window replacement, window repair, skylight, storefront, and interior and exterior doors, security doors and more.  …

Licensed and insured contracting company with promising work and beautiful results. No job is too big or too small.  …

V&R Home Improvement has been in the contracting and construction business for over 20 years. Joe Rizzuti, the owner, is a creative individual who knows the business inside and out. His expertise can transform any part of your home into your dream. You wont just improve the look and functionality, you’ll increase the home’s value. Joe is on site for every job and will be there for your next home improvement.  …

Insured
All statements concerning insurance, licenses, and bonds are informational only, and are self-reported. Since insurance, licenses and bonds can expire and can be cancelled, homeowners should always check such information for themselves.To find more licensing information for your state, visit our Find Licensing Requirements page.
General Information
Free Estimates
Yes
Eco-Friendly Accreditations
No
Payment Options
Check, Visa, MasterCard, PayPal
Senior Discount
No
Warranties
Ask for details

Grand Glass Inc is currently rated 4 overall out of 5.

No, Grand Glass Inc does not offer eco-friendly accreditations.

No, Grand Glass Inc does not offer a senior discount.

No, Grand Glass Inc does not offer warranties.