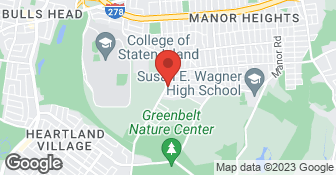 1,000 dollars off any finished basment Free granite top with a remolded kitchen No subcontracting we do everything our selfs.

Provider gave a visual estimate to redo entire shower, tile, toilet, walls, the room was stripped down ready for work. Provider had a crew working here at my moms house (mom's a nurse working all day no one to supervise) for about a week until job was completed. We immediately noticed there was a water leak from the kitchen ceiling which appeared to be coming from the toilet where the job was done. We called Tasso (owner-provider) to inform and he said he will stop by the following day. He did stop by the next day and decided to apply silicone around the shower and toilet but the leak continued. Mom called again to inform, Tasso (the owner) kept telling mom he would stop by and fix, days went by and no show only after about 2 weeks he came by with a plumber who said he fixed the leak by tightening the pipes under the sink and replacing some other unknown part according to what they told mom. The leak continued and mom, uncle and myself have tried contacting provider but he was not responsive. I must note that owner lives a few houses down, the main reason we chose to use his company! TWO months have gone by and he finally showed up with 2 employees to look at the leak (I repeat, TWO months). I personally demonstrated the crew how severe the leak was as soon as the toilet flushes. They removed the toilet and apparently it was not sitting right therefore the water was not flushing into the trap. The crew adjusted the toilet and applied silicone. I then pointed out to the provider that the tiles have been laid wrong, not straight and cut awkward on the walls and floor, the tiles are not flat on the walls and have different gaps in between them and the drain hole was too big for the drain cover. The provider/owner told me it was "only a $5000 job and I couldn't expect much from that". I told provider I disagree with this type of attitude because no matter how big or small a job is, it still needs to be done right! I don't live here and mom doesn't want any neighbor issues so she didn't want to sue but we are now 4 months after project completion and we now have another leak which apparently is coming from the shower. Tasso the owner is really hard to reach via cell phone, we don't find it ethical to knock on the door since it's a residence and not a store/shop. Owner said he would stop by last Friday but no show no call and no text. I live in a different state, therefore cannot be there to help out but I strongly believe this provider gave minimum attention, minimum care and zero professionalism to a single mom who's never home because she has to support a family. Provider knew entire family had to use the shower in the basement during the down time which is only adds to the aggravation, disappointment and frustration.

A family run NJ general contractor business with years of experience, we offer a wide variety of home improvement services to our clients and oversee every phase of the project from start to finish. Our services include Roofing, Painting, Additions, Kitchens, Bathrooms, Basements, Decks and other home improvements. Based out of Union, we service all areas of New Jersey including, Union County, Middlesex County, Monmouth County, Mercer County, Hunterdon County, Somerset County, Mercer County, and more.  …

Izucar Home Renovation is a family owned business that has operating since 2010. We fix existing homes better, with honesty, care, love and professionalism. Izucar Home Renovations specializes in painting, windows, wood flooring, doors, tiles and more. Our company is effective, loyal and available to wok in all 5 bureaus.  …

Residential new construction from footings and foundation to your finishes Bathrooms and Kitchens Painting.

AETOS HOME IMPROVEMENT is currently rated 1 overall out of 5.

No, AETOS HOME IMPROVEMENT does not offer warranties.