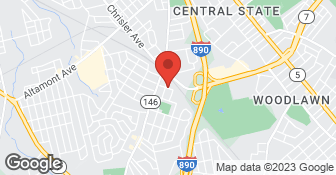 Orsini Landscaping is a full-service landscape design and build company serving the greater Capital District area. Founded in 2004 by David Orsini, BS Landscape Architecture - Cornell University, we are landscape professionals with over 25 years of hands-on experience. We are committed to providing quality custom designs and installation services as well as superior customer service. We pride ourselves in paying close attention to the needs and wants of each individual client, providing the same attention to detail and high level of service no matter what size the job....

Orsini was hired to bring in top soil, spread and grade it and hydroseed. The soil brought in was low quality, very sandy. In some places they put less than an inch down. But my major issue is that they decided to hydroseed on a day that we knew (all forecasts agreed) it was going to pour that night. The rain washed away large areas of dirt and seed, and even where it didn't wash away, pre-existing slate was exposed due the incredibly thin layer of dirt spread on top. You can see how bad it was from the pictures attached. This happened in 7 different spots on my new lawn. When I called to discuss it with them, no one answered, and after leaving messages, I never heard back. They don't care about their customers or doing a good job, it is just a paycheck and then you no longer matter. I advise you avoid at all costs.

Description of Work
Grading and Hydroseeding

First of all he did not answer my calls. Finally he showed up one day. We had an incomplete work done by our previous contractor. He was very arrogant. Wanted us to do things in his way rather than ours. Kept on boosting about this landscaping degree from Cornell!!! We did not like his attitude and did not hire him.

I couldn't be more pleased with the work done by Dave Orsini and his crew. They were absolutely professional, worked very hard in very hot weather and did an excellent job. Everything was scheduled very efficiently. Materials needed for the day were delivered each morning on time and Dave Orsini was on site most of the time. Even when he was not here, his crew worked well and professionally. They finished a large job in just a week. It may have been a little difficult getting in touch with Orsini Landscaping originally, but I think that's because they are busy doing work for their existing customers. Perseverance paid off and they were well worth the wait.

Description of Work
Orsini Landscaping built 2 retaining walls in our very steep backyard, graded the slope and also built a patio with steps and a landing coming out of the house. They enhanced the drainage, removed an existing decorative fence, moved several bushes and reseeded and mulched when they were done.

I left two telephone messages for a call back and sent an email. I have not gotten any response. I consider this to be very unprofessional.

Description of Work
no response

As was the experience of other people on Angie's list, they were unresponsive. I emailed them, then 2 days later I called them. I never got a reply. I don't know why they are in business since they have no interest in potential customers. If you're busy, at least call back and say we got your message, but are too busy.

I left a voicemail message and followed up with an email the following week. I was inquiring about a possible large home landscaping project. I did not get any response from them. However, they clearly got my message(s) since they responded to my email 6 weeks later after we had long decided to go with another contractor. It is extremely bad business practice to ignore potential customer inquiries, even if you are fully booked!

Description of Work
I had a large home landscaping project for which I wanted to receive a quote. They did not respond to voicemail or email requests.

He is absolutely fantastic. The patio he put in is gorgeous. Very knowledgeable, very prompt and stuck to his deadline. Did an outstanding job...would use him again in a minute.

Description of Work
He put in a patio for us and did some landscaping.

left voice message never heard back from them.

Description of Work
no services performed

We had a problem with the timing so I did not use them. They were very nice on the phone.

Description of Work
I called Orsini Landscaping for some landscaping work.

They were great. They did 2 projects for us. The first one was done in 2005 or 2006 and was the best one. It included large retaining walls and plantings. I will definitely use their services in the future too.

Book today you’ll never be disappointed! We offer quality service at an affordable price. Contact us today about an estimate!  …

Insured
All statements concerning insurance, licenses, and bonds are informational only, and are self-reported. Since insurance, licenses and bonds can expire and can be cancelled, homeowners should always check such information for themselves.To find more licensing information for your state, visit our Find Licensing Requirements page.
General Information
Free Estimates
No
Eco-Friendly Accreditations
No
Payment Options
Check, Visa, MasterCard, American Express, Discover
Senior Discount
NO
Warranties
Ask for details

ORSINI LANDSCAPING LLC is currently rated 4.4 overall out of 5.

No, ORSINI LANDSCAPING LLC does not offer free project estimates.

No, ORSINI LANDSCAPING LLC does not offer eco-friendly accreditations.

No, ORSINI LANDSCAPING LLC does not offer a senior discount.

No, ORSINI LANDSCAPING LLC does not offer warranties.