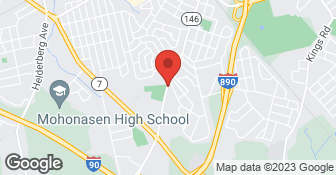 Problem fixed in about 10 minutes

Description of Work
Dishwasher not working

He answered the phone when I called, said he would be to my house later in the morning. Showed up when he said he was going to be there and promptly fixed my issue. Nice guy, would definitely use him again.

Description of Work
The refrigerator compressor was not turning on. He determined it was a control switch over the phone, came the same day with the correct part and installed it in about 30 mins.

Great experience - We got his name from Angie's list, and would definitely use him again.

Description of Work
Joe repaired our 4 year old Whirlpool Cabrio washer, which wouldn't spin or drain. He replaced a part, freed up a stuck transmission, and the thing now works fine. He came the same day we called him, arrived on time, fixed the problem in about half an hour, and charged a fair price. I'd definitely have him back.

On Friday 9/18/2015 around 3:00AM; my 4 year old Maytag refrigerator failed on me for the third time. After moving the food contents from the refrigerator/freezer to ice chests and a basement freezer, I check Angie?s List to find a repairman. I called the first repairman on my list at 6:00AM and left a message on the recorder. Around 7:00AM; I received a callback from this primary contact, who told me he was away on vacation. He said he will contact Joe Flis on my behalf and to wait for his phone call. As it turned out Joe Flis happened to be the second repairman on my list. Around 8:30AM, I got the call telling me that Joe will take the service visit and to expect his call shortly. I received the call from Joe, I explained to him what the problem was, he told me he would be over shortly. He arrived at 10:00AM, he check out the problem and told me that the control board had failed and as a results cooling coils had an ice buildup that had to be thawed for 24 hours. To my surprise, he said he stocked three replacement control boards at his shop. He quoted a repair price of $375 for parts, labor and sales tax. I had him get the part, the refrigerator was repaired by 11:00AM but had to thaw the ice buildup for 24 hours. The refrigerator was powered up the next day and is working fine. For information purposes; past service calls under an extended warranty took four-five days just to get a service call. I am extremely pleased with the service I received from Joe. Also, Joe charged me about $250 for the control board which was in line with other internet appliance parts stores, total labor cost was about $100. I highly recommend Joe Flis, I know he has been in business for many. He doesn?t just operate a appliance repair service, he also sells appliances in his store.

He was flexible and worked around my schedule, I thought the price was reasonable., and he cleaned up after himself. I was very pleased with the overall experience!

The oven wouldn't heat up. Called Joe. He was in the neighborhood and came over to my house in less than 30 minutes. He replaced the ignitor and had the job finished in less than 15 minutes. He was very professional. I will definitely use him again and recommend him to my friends and co-workers!

Description of Work
This was a while ago so I'm not sure I remember the cost correctly. I've used Joe a few times and my father used him for years as well. He's quiet (I cannot STAND a gabby contractor) and gets the job done. | |This particular time he came to repair wiring on my stove top that a mouse had chewed through.

We didn't actually think the 1000 dollar dryer was fixable. Joe showed up, took it apart, determined the part that was necessary and fixed it! Very trustworthy guy with extremely reasonable rates. Would most definitely use again. Thanks!

Very neat and direct in his trouble shooting abilities.

Description of Work
Refrigerator had failed. Joe was able to appear the next day and had the necessary parts to make the repair.

We are very satisfied with Joe, and appreciate his customer support.

Description of Work
Joe came the day after I contacted him and let me know there could be two issues with our oven, the temp probes would have to be replaced, and possibly the control unit as well. The first call was a couple of days before Thanksgiving, and he made a special effort to insure the probes were replaced before the big day. The oven worked fine for a couple of weeks, but unfortunately, the control unit needed to be replaced and we had the problem again. Joe went out of his way after the call to come the same day and replace the unit, and he even had to travel to get a replacement.

Mr, Flis knew what the problem was and had the oven fixed within 45 minutes,

Description of Work
I had a heating unit replaced in my oven. Mr. Flis arrived promptly, on time and was courteous in every way, He fixed the oven right the first time and I never had another problem. He stands behind his work, I would hire him again,

Description of Work
I called because washing machine was not working. He was out within 90 minutes. He had all the parts on him and was able to replace it. Then, I explained to him that the dryer wasn't working up to par for the heavier loads. He replaced a part with a new part. Both Washer and Dryer are working like they did when I bought them 11 years ago. He was able to fix both for a fraction of what 1 new appliance would have cost me. I will recommend Joe E. Flis to anyone.

Surefireservices is committed to providing our customers with top quality services and we won't leave until customers is completely satisfied so call us for any of your electrical projects no matter how big or small.  …

Insured
All statements concerning insurance, licenses, and bonds are informational only, and are self-reported. Since insurance, licenses and bonds can expire and can be cancelled, homeowners should always check such information for themselves.To find more licensing information for your state, visit our Find Licensing Requirements page.
General Information
Free Estimates
Yes
Eco-Friendly Accreditations
No
Payment Options
American Express, Discover, MasterCard, Visa
Warranties
Yes