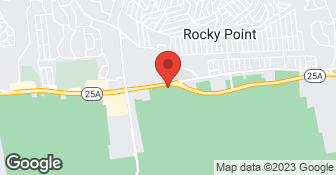 We are a full service Home Improvement Contractor Company. Owner is on every job. Proudly serving Suffolk County, and all of Long Island. Perfection is not a event for us, it's our habit.

Description of Work
I was looking for someone to install a frameless shower enclosure. On Tuesday the 22nd, I called and spoke to someone at All Glass Professionals who was a bit abrurbt. He said he was with a customer and would I be home around four and he would call then. He never called. At about 5:30 the same day, I called back, gave my name and niumber and what I called about and asked him to please get back to me. He never called back. I will not call again.

I have had two very positive experiences with All Glass Professionals. Both times, I dealt with Michael Hatzel. In January of 2011, I had a remodel done of a half bathroom. I needed a mirror and AGP was recommended by a friend. Michael arrived promptly and suggested a large wall to wall mirror over the vanity to give the small room the allusion of more room. I went with his suggestion and was pleased of the outcome. Recently, I contracted out the remodel of the main full bathroom. I had workers do a complete gut and renovate while i was away with family. I contacted Michael at All Glass Professionals again and asked him to take measurements for another large wall mirror. He responded promptly and suggested a beautiful bronze tinted mirror with a one inch beveled border. While taking measurements though, he noticed some errors the other workers tile layout. He called me immediately and helped resolve the issue. Michael cared enough about the overall outcome of the room that he took extra care and interest to insure i was satisfied. When I returned a week later with my family, the new mirror was in and looked great! I spoke to my tile guy and he admitted he had misunderstood how i wanted the tile laid out and if it were not for Michael Hatzel, it would have come out all wrong. I would highly recomend All Glass Professionals.

United Water Restoration of L.I is a 24/7 full-service emergency restoration company serving Nassau and Suffolk counties, and the NYC-area. We provide immediate response for water, flood, fire, storm, sewage, and mold damage. Our specializations also include: anti-viral disinfectant treatments; deep cleaning; clean-outs / pack-outs; demolition; odor removal; oil spill remediation; air duct and vent cleaning; and reconstruction. United is locally owned and operated and works with all insurance carriers. We're licensed and insured, IICRC professionals, and a Lead Safe Certified Firm. If your home or business suffers damage or experiences disaster, the United team is ready to get the restoration or clean-up job done!  …

With years of experience serving Ronkonkoma and surroundings area, Global Restoration Services, Inc. is your solution for all your mold removal needs. We take great pride in our extreme professionalism, timeliness and superior customer service on every job. We make sure to develop a lasting relationship so that the next time service is needed there will be no question on who to call. Satisfaction guaranteed!  …

Unique Restoration is a licensed and insured, full-service remediation, restoration and general contracting company that offers a variety of insight and services for mold remediation, water damage restoration, sewage backup, storm damage, and fire damage restoration. Minimizing your loss is our top priority. Our highly trained technicians will evaluate your damage and provide a plan for property restoration and recovery. Your assigned project manager will digitally record and document the damage to your home or business and its contents, providing valuable advice and guidance when filing your insurance claim.  …

All phases of home improvement specializing in Frameless shower enclosures and mirrors as well as all types of glass and construction repair.

How is All Glass Professionals Inc overall rated?

All Glass Professionals Inc is currently rated 4.3 overall out of 5.

What days are All Glass Professionals Inc open?

All Glass Professionals Inc is open:

What payment options does All Glass Professionals Inc provide

No, All Glass Professionals Inc does not offer eco-friendly accreditations.

Does All Glass Professionals Inc offer a senior discount?

No, All Glass Professionals Inc does not offer a senior discount.

Are warranties offered by All Glass Professionals Inc?

What services does All Glass Professionals Inc offer?

All Glass Professionals Inc offers the following services: All phases of home improvement specializing in Frameless shower enclosures and mirrors as well as all types of glass and construction repair.

Are there any services All Glass Professionals Inc does not offer?