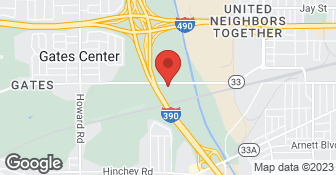 Had my quote from 2020 which the company honored and 2021. Worked on quickly and professionally, they cleaned up after themselves so there was no garbage left from the old driveway. The installation of the new driveway went well. The company worked with me on the installation date which was greatly appreciated. I would recommend this Company for driveway replacement.

Description of Work
I recommend this 4 generation firm in the strongest possible ways. Putting in a brand new small city drive was complicated by need for coordination with both the city and county and owner Rick Carderelli was extraordinary. The crews were excellent in all ways....and I can't believe I don't have to park on the street anymore.

Not well; they ran into a problem instead of calling us or waiting to talk to us they finished the job and then wanted $200 more for the job. Very unprofessional, they were on phone yelling at me.

Description of Work
Gave a fair estimate for job to widen the apron.

The work was excellent as it looks really nice. They knew what they were doing and I am happy with them as well. They were really hard workers and worked hard over several days. They were on schedule every day and finished the job when they originally said they would. The people I talked with at the company were very helpful and polite also. They were all very informative.

Description of Work
They re-surfaced my 75 foot driveway.

I had three estimates that were almost identical and were presumably based on square footage and the cost of asphalt. Two of the companies (including Cardwell) were selected based on longevity and the BBB report;the third was in-town. The repair/resurfacing went according to our agreement and was accomplished efficiently and quickly with no unforeseen complications. After the fact, a neighbor who works on street design for the City of Rochester, inspected the job and inquired if a "water test" for identifying low spots had been done (answer: No) and commented that there was at least one small area that was not compressed/rolled as well as possible, possibly due to the asphalt having cooled prior to rolling.

Description of Work
Asphalt driveway (2600 sq. ft.) was repaired/resurfaced, included filling in cracks with hot tar on day prior to work, digging up roots that had heaved the surface, digging up spots where gasoline had destroyed the surface, and resurfacing with 1.5" of new asphalt. The driveway was 40+ years old and had last been resurfaced 25 years ago. It was in "pretty good" shape and was deemed be worthy of resurfacing (rather than replacement) because it would provide a stable, compressed base for the new layer. I cleaned out the dirt around the edges and gardens and trimmed some overhanging trees and shrubs because I was told that the company were "pavers, not landscapers". I was very flexible around scheduling and the date was changed several times due to the town's work on the roadway, the company's larger commercial jobs, and my own availability. This was not a problem for me.

He didn't do what he was suppose to. The stones were not the same size. I have different sized stones on top of my driveway. They should be the same size. He said he was the best. I would not use them again.

Description of Work
I had Cardwell put in my driveway. I wanted him to dig out 6 inches down and have a good base of stone. He added it on the contract and initialed it. I called him to let him know they were not going down 6 inches. He said "It's my brother on the site, he must not have know about the request."

Dry Bottoms Masonry is a small family run company... Specializing in basement waterproofing and cement framework, such as patios, garage floors, sidewalks, driveways, and our own special forever cement landscaping (call to inquire)... We have a small crew with small overhead which allows us to pass the price cut down to our clients... We guarantee estimates and prices lower than our competitors anywhere from 10-20%!!! We also offer warranties of 20-50 year on any basement waterproofing or drain tile system installation.... Contact us today for any of your needs, we guarantee to beat any quote and you'll get a better product and even better service than the big box companies! Thank you for your interest in our company!!! 585-794-7353 (Ask for Angel)  …

Bonded
Insured
All statements concerning insurance, licenses, and bonds are informational only, and are self-reported. Since insurance, licenses and bonds can expire and can be cancelled, homeowners should always check such information for themselves.To find more licensing information for your state, visit our Find Licensing Requirements page.
General Information
Free Estimates
Yes
Eco-Friendly Accreditations
No
Payment Options
Check
Senior Discount
No
Warranties
No

Cardwell Construction Co Inc is currently rated 3.9 overall out of 5.

No, Cardwell Construction Co Inc does not offer eco-friendly accreditations.

No, Cardwell Construction Co Inc does not offer a senior discount.

No, Cardwell Construction Co Inc does not offer warranties.