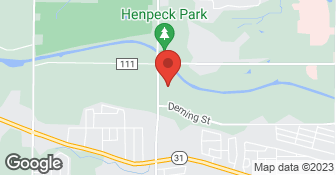 At Oscar Van Lines we take moving seriously. From the initial sales consultation to arriving safely at your new home, our team of moving experts provides detailed planning for every step of the moving process so your transition is as smooth as it can be.  …

A+ Moving and Delivery LLC

We are a fully licensed and insured, veteran owned and operated, moving and delivery company serving all of western NY  …

Licensed to perform both as Local Moving in Rochester, NY and other surrounding areas or Long Distance Movers, White Gloves Moving has the experience and expertise to take care of your relocation regardless of the distance. We always stand behind our work, with customer satisfaction being our #1 priority.  …

It was just town to town, not a far move. They were awesome. The price was middle of the road. Quality was excellent.

Description of Work
They moved me once.

Excellent. I wish we could've had our experience with Bauer.

Description of Work
We planned on using Bauer & Sons as our moving company. When our closing date was pushed out, Bob was very understanding. He was booked solid for 2 weeks out and seemed to try every option he had to get us moved. Unfortunately, he was unable to accommodate our move. I truly appreciate the professionalism and feeling like we really matters.

First of all, my mother was recently diagnosed with pancreatic cancer in February. She does not have very much long to live. We hired a moving company so that we would not have to be screwing around with any of that and it could all be done by the moving company. We paid them $700 and they did not move everything. He argued with me about packing. We talked about packing and then, he claimed we never talked about it. I had written it down. I would not have written it down if we had not talked about it. What he ended up doing was he tried to get me switched to another day. I told him that I could not possibly be switched to another day and it has to be that day that I already scheduled. He was supposed to come at 8:30 a.m. and instead, he told me that he cannot come until between 11 and noon. That is because he shoved somebody in ahead of us and after us. Then, he was strapped for time. So, he did not do everything he was supposed to do which cost me and my siblings to spend four days packing and moving the rest of the things into storage while my mother is dying. Then, I found out that Mr. Bauer is dead and that this business was sold. His wife sold it. It is a whole lie. It is not a 50-year old family business. Some guy bought it from his wife. It is not even the same people. I would have never gone with them if I had known that. So, I was not happy with them. I would never use them again. I would never recommend them to anybody.

Description of Work
Bauer & Son Moving moved some stuff and packed some stuff from an apartment and moved it into storage.

Quoted us almost double what they charged us prior to move the same piano! Just to move it from our driveway to the house was over $300

Arranged 4 weeks in advance via email. I confirmed a couple times in advance to make sure that they would show up, but still had to call that morning as there was no typical day-before or day-of confirmation call from the office. But they showed up on time, so this really wasn't a problem. Two younger guys with a 2 axle truck. They are not professional movers like you would find with any of the big national companies. But I only needed heavy furniture and some boxes moved - not packing - so I figured it would be fine. The guys were nice enough, tried to take precautions with mats and runners, but having done 10+ corporate moves in my life there was clearly a huge difference in quality compared to professional moving team that does this 24/7 for a living rather than a couple of local employees who do this for a job. Packed the house up with minimal issues. One of the last items was an expensive dining room table that I said either needed to lay flat or have the legs disassembled. Sure enough, when we arrived at the new house, they had packed the table upright with all the weight resting on 2 legs. The driver said they did not have the correct strapping and what they used did not hold, so the load shifted and snapped those legs right off the table like matchsticks. There were other minor issues - didn't put a window back correctly, didn't reattach a mirror, several spots of wall damage where they banged furniture going into the house, etc. Settling the broken table issue was the real frustration. The damage was only caused by their negligence. I purchased additional insurance in advance so that if there WAS damage it wouldn't cost me anything. The owner said that the premium quoted was too low (how is that my fault?), that it didn't cover replacement value (which I specifically requested) and then low-balled me on the settlement. Other than taking the time and effort to take them to small claims court, there's nothing I can do. The actual cost was twice the estimate that they gave me. I know the hassles of moving from an old house into an old house cannot always be predicted, so I didn't even bring this up as a gripe. But if you think about it, that's a pretty big miss in terms of accuracy if you were relying on a quoted price. For a small local family company that allegedly prides itself on service, this was a very disappointing experience. They might be OK if you just need to move some boxes, but if you have anything valuable or if you are expecting truly professional movers, you should avoid this company like the plague!

Description of Work
Hired for a local move of furniture and heavy boxes.

They worked very hard for about an 11 hour day. It was a bit messy on the floors but it was snowing that day. No damage to either house or the furniture.

Description of Work
Moved out of a 2200 sq ft house + basement workshop across town in one day. They also packed up everything the day before.

Outstanding Careful with doors and hardwood. Prepared all to avoid damage with mats

Description of Work
Move entire contents of home to a new home.

Two young men showed up exactly on time and went about their work in a professional manner. They unloaded the furniture in the new apartment and made several suggestions as to possible arrangements. They were friendly, prompt and efficient.

Went great. Large truck and 3 men for about 9 hours. Very capable and friendly.

Description of Work
Moved most items from 3-bedroom home to a storage unit 10 miles away.

Even though they only moved half of our belongings, it still took up their entire truck. It was a difficult move, with items in our attic and basement needing to be moved in addition to 2 floors of living space, plus yard maintenance items from a shed out back. We should have had 3 movers but we didn't realize how much stuff we actually had, so the 2 movers we had worked a full day just on our move. It was a long day of difficult work, but they soldiered on and did what needed to be done.

Description of Work
They moved half of our belongings from a house in the city to one in the suburbs.