With Angi since December 2014 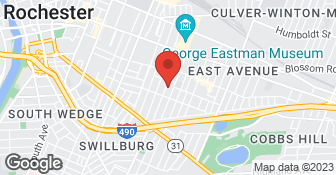 We are a family owned and operated business. Our experience was brought down from 3 generations. We specialize in ceiling and wall repairs including water damage, stress cracks, sagging plaster, Victorian style plaster molding repairs  …

Painting RENOvations Inc is an owner-operated business that specializes in Interior and Exterior Painting and has been in the business for almost 15 years. We are very proud to say that we have made every single customer we've had extremely happy with the end results. Customer Service is also a specialty of ours, because when we work for a customer, we aim to always inform the customer of what we're doing, why we're doing it and how long it will take. There are many Pirate-like Painting crews out there, so we want to show you why we are a difference in the Painting World. You will not be disappointed with our quality of work.  …

"We are a family owned and operated business in Rochester NY. We handle any and all types of home renovations and remodeling. Give us a call or checkout our website to get more information on getting your project done."  …

We hired Josh Zamiara of “Artisan Techniques” to do the crown molding, door frames and fireplace mantel in one of our rental units (since our usual carpenter was overwhelmed with work and could not fit us into his busy schedule). One of our other regular contractors highly recommended Josh based on his past work. Because of his past reputation and referral from our regular, well-respected and professional contractor, we trusted Josh in completing the tasks within a few weeks. We trusted him so much that we gave him a copy of the key to the studio apartment to come and go as he pleased, and even paid him in full in advance. Huge mistake! He took advantage of our full trust in him. Josh started the task on a good note by coming in regularly almost every evening to do the crown molding. After that, things went downhill rather fast: his framing of the bathroom was sub-par, and then he completely stopped coming in to resume work. He kept giving us excuses: he had to fire an employee and was short-staffed, and then it was his dog, and then his sister, etc. We tried to accommodate him, we were patient with him, but then the delays got longer and longer to the point that our other contractors could not continue their own work because Josh did not finish his part of the renovations. The other contractor who referred us to him was even surprised by his delays and his refusal to answer his own texts and calls so that they could co-ordinate their assigned tasks! He later found out from other people that Josh was focusing on his big lucrative contract at the expense of everybody else. We lost an entire month without any work being completed! I had to turn away a few potential tenants because of the delay! He kept putting off the work! Furthermore, he kept ignoring my phone calls, text messages and e-mails! When I finally got him to come, I explained the issues but he seemed superficially interested in finishing the work because he loved working on an old house, but by this time I realized that he was insincere. I had to let him go. He told me that he wanted to remain on good terms, but in the end Josh refused to refund the unused portion of the payment stating that he needs to consult his lawyer since I broke the contract with him. He gave excuses that he was willing to work with us to complete the job but I refused to give him that chance! He also complained that the work that we wanted from him kept changing (implying that we had to pay a work modification fee). Do yourself a HUGE favor: DO NOT HIRE JOSH from "Artisan Techniques"! Underneath his charming, polite persona lies an unreliable, unprofessional, inconsiderate scammer. He will take your money (and even ask you for more) for work that he does on his terms and his schedule. I, personally told him that the work needed to be completed by December 1st so that I could attend to my other responsibilities (my other job, taking care of my disabled mother, and getting ready for my first treatment of radiation therapy), but clearly he did not care! I did manage to find someone else to finish Josh’s work, but ultimately I lost money since I had to pay someone else to do a job that I already paid Josh to do! Spare yourself the headache, heartache and risky expense! Find someone else!

I could write a book on this sad experience. The company came recommended; and the owner was someone we felt we could trust- very personable and not at all like a salesman. He started the 3 month job and “finished” (we ended the contract because of the poor workmanship) almost a year later. For a long while he just left building materials on our front lawn- and whenever we asked when the job would actually begin, there was always an excuse...and we were okay with it each time because we liked him so much. At the outset, he started with about 5 guys and by the middle (because they left his company), there was 1 worker here daily; and many days the owner called to say he had to pull his guy for another job. We were extremely patient. Every time we expressed concern, he reassured us and would do consistent work for a couple days or a week- then the nonsense would start up again. The workspace was unsafe and an utter mess. We have already spent money to fix the roof that was not deemed waterproof by two other companies. We have yet to pass inspection because we have many things to fix- things that we will pay for out of pocket. When asked for an advance somewhat early on, we gave it...what a mistake! We ended up paying all but $4k- and there is definitely more than $4k worth of work left for us to do. This was a really disparaging experience for us, especially because we had a great relationship with the owner and his workers. I have 32 pages of documentation showing the poor workmanship- little things like using grout instead of caulk on the counter to gauging the new marble counertops we installed. Our family went about 3 months with no access to our kitchen- everything was in our dining room. We cooked in the microwave, drank out of the upstairs sink and washed dishes in the basement. Our experience was nothing short of excruciating. There is much else I could include, but it’s too much. We just don’t want anyone else to go through what we did. This was all of our money- and it still feels unreal. The pictures shown are only a handful of what I have- and yes, most of this is finished work.

The remodel started good, the demo was fine, carpentry was fine. The crew was very messy but they were nice. The job started to go horrible from the time they started to tile the bathroom. It took them 3 weeks to tile a bathroom that is 80SF and at the 3 week point when I finally lost it, they still were not finished, we called in another company that specializes in Tiling and ended up ripping the entire shower out and starting over (this cost an additional 9k in materials and labor as I couldn't re use what they had put up). When I asked for a refund of the 50% down (this did not include labor for the bathroom, only for the closets not done plus the materials that I bought and have receipts for), he had his attorney respond with a letter and updated bill indicating the job cost much more then expected, even stating he paid for some of the materials (which I again have receipts for) I had this contractor move a toilet from my master bath to another bathroom in the house and the updated bill from the attorney had a cost showing of 1,000 to move it. In addition he cut all tiles in our bathroom that they were remodeling, yes they left a wet saw in my bathroom overnight to leak all over the brand new marble tile and saturate the just (that day) grouted floor, also I have young kids so having a wet saw in our home is obviously not safe. When we signed the contract, he was very nice and we thought the owner would be on site, he is not. He is managing several jobs and clearly over his head. This experience is very unfortunate and I write this review so that no one else has to go through what we did. 5 week renovation that lasted 12 and we are out $10,000 in materials that needed to be re-bought and money that he owes us back. I have 40 pictures to prove what I went through.

With Angi since December 2014