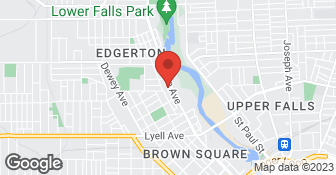 I hired Steve because he seemed like an honest, family guy. Boy was I wrong! Everything took much longer than anticipated and despite reservations, he convinced me he needed the rest of the money to finish the jobs. After I paid, he showed up less and less and became visible aggravated with the work. Then he demanded more for tile that he'd contractually agreed to include and electrical repairs that needed to be done because he wrongly placed the switch. When I refused to pay, he refused to show up despite only about 50% of the work being done. I lived without a kitchen sink and stove for weeks as a result. He left a live wire hanging in one of my cabinets. The area he'd worked on to install a backsplash all needed to be torn out because it was done so poorly. I had gaping holes in my laundry room and no ceiling for weeks. All outlets were left without covers. I could go on and on. The tile was done pretty well, but the floor moldings were torn out and then replaced and many were broken with chunks of wood missing. The ones that weren't broken were damaged; we now need to replace them. A few weeks later, my doorbell rang and it was a man who says he did the tile work...and that Steve never paid him...and that he worked him so hard that he ended up in the ED! Do not hire this crook! I honestly think he got in over his head, didn't know what he was doing and realized it was going to cost him to subcontract it out, so instead he took my money and ran. Very unfortunate; we'd taken a loan out for the remodel and taking out another loan to redo and finish the job will have long-lasting effects on my family.

After a week and a half I fired him. He was rarely on site, as promised, and had sub-contractors doing the work. After they left I contacted an electrical company to check the safety of what they had done. This was based on the sloppy job that I could see. I found that they had left a live wire, cut three times, in an interior wall and then drywalled over it. He did damage to my walls, plumbing, wiring, and woodwork that I can never repair in my 110 year old home. They screwed drywall into heat runs. They ruined the finish on one of my hard wood floors, stapled plastic into woodwork, and left plumbing disconnected. When I asked for a refund do that I could at least get things fixed, he has refused. I was willing to let him keep what he felt he earned, even though it was sloppy and dangerous. But he should be paying me back at least $5000, and that's being generous on my end. I don't have a lot of money and I just want to get my home back to what it was. I know it will never be what he promised it would be.

Description of Work
He was hired to do a huge remodel job that included my kitchen and an opening into the family room. Additionally flooring and drywall for the kitchen and bathroom.

I am a master tile installer. I have been doing this full-time for the past 8 years for homeowners and home builders. Showers and floors are my specialties. Porcelain, marble, granite. All styles and designs. Mosaics and backsplash.  …

Previously known as Cliff Kemp Carpet and Flooring, Wagner Carpets has been in the Carpet Industry since 2002 and is known in Rochester as the go-to installer for difficult jobs. With an eye for detail and a drive for excellence that is unsurpassed in the industry, Andy's success as an installer has brought him to owning his own business. And when the installer is the sales person, you know you can trust the quality of the product you are choosing. At Wagner Carpets, we know what types of flooring work best in each and every environment and will only provide you with samples to choose from that not only fit your budget but will look beautiful for many years to come. We'll come to you or give us a call to stop by our showroom!  …

We have the experience and dedication to get the job done right! Specializing in --- services; We guarantee your satisfaction, and we won't leave until the job is done right. We pride ourselves on the quality work we provide, while delivering great customer service! Call or click for your FREE estimate today! Pay upon completion of work.  …

How is Affordable Homeworks overall rated?

Affordable Homeworks is currently rated 1 overall out of 5.

No, Affordable Homeworks does not offer a senior discount.

Are warranties offered by Affordable Homeworks?

No, Affordable Homeworks does not offer warranties.

What services does Affordable Homeworks offer?