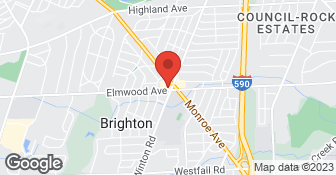 Whether you need mold remediation, lead paint abatement, radon mitigation or even wildlife control, we’re the team that will keep your property safe and healthy. At Advanced Environmental & Wildlife Services LLC, we proudly serve homes and businesses in Rochester and beyond. Our licensed and certified contractors will do whatever it takes to ensure your total satisfaction

My father had a mold inspection and found that he had high levels of toxic mold throughout his home. The inspector, Bill Kimble, recommended that my father leave his home immediately until remediation could be completed. The inspector recommended Josh from Advanced Environmental. Josh came out the next day. Josh quoted $8,977 and verbalized that his company would offer a lifetime warranty, ensuring my father’s mold problem would be taken care of, OR if my father paid on the spot, a 15% discount would be applied for a total of $7,630.45. If payment was not issued then and there, the 15% discount would be void and Josh would only offer full price **sham** My father wrote a check to take advantage of this “discount”. - My father is 76, was just released from the ICU for COVID, and on an oxygen machine. The following day my dad received an email containing the contract. Upon review, the contract wasn’t quite what Josh and my dad discussed. This contract included running an air scrubber, removal of a 15x19 carpet, HEPA vacuuming, and wet wiping all surfaces. Not only does this remediation plan not adequately address my fathers mold issue ** I know, I know; They only complete work within the inspectors “scope” - that hustle warrants a completely separate ethics review btw- ** But this contract did not include mention of a lifetime warranty, aside from 3 sqft of encapsulation under the bathroom sink. We sought clarification, that my father had wrote a check in good faith that Advanced Environmental would REMEDIATE (definition: the action of remedying something; reversing or stopping environmental damage) with a lifetime warranty. Josh let us know that only the 3 sqft encapsulated behind the bathroom sink would be warrantied. The bathroom didn’t even have the highest levels of spores in the home. In fact, my fathers bedroom had high levels of stachybotrys. To summarize: Advanced Environmental wanted $8,977 for surface cleaning, which would not at all address the source of the toxic mold infestation throughout my dads entire home. The consequences of trusting Advanced Environmental could have been my dads life. Luckily, we know better and thoroughly read the contract, including fine print, before signing. Not so luckily, my dad had already handed over a check. Before we could cancel the job, my father’s check was already cashed. Once we were finally able to contact the “office manager”, Josh’s wife Tonya, we were told that there was a 3 day cancellation fee, otherwise there would be a 20% penalty in the amount of $1,526. THEN they still sent out their crew. 2 young gentlemen arrived. Per NYS standards, mold abatement contractors must ensure that workers on the project have mold abatement worker licenses, which these boys did not have, but I digress. For what it’s worth, the boys were patient and courteous while we spent over an hour on the phone, going back and forth with Josh, Tonya, and Bill; the initial mold inspector. Tonya insisted that we let the crew begin the job as they drove over an hour to our property. Unfortunately for them I work closely with HUD and DOH, so I’m versed in mold abatement and DOL standards. We denied the crew and stopped the job before they could begin. When they realized that they could not talk circles around me, they became defensive and hostile - ADMITTED that if they thought my father could afford the necessary abatement, they would have recommended the needed action. Instead they took us for whatever they thought they could get, knowing the remediation plan was useless, dismissing the risk to my fathers health. These people have no ethics. They took over a month to issue a refund (minus their 20% penalty: $1,526) and their check bounced. Let me again mention, we NEVER signed the contract and NO work was ever completed! My father is entitled to a full refund. I have great concerns that Advanced Environmental (in cahoots with Turn Key Home & Mold Inspection - Bill Kimble) has been getting away with scare tactics, pressuring home owners into their sham business venture. Buyer Beware.

Unfortunately [Member Name Removed] wasn’t a customer of ours and we didn’t do the project due to her own recommendation and response to high levels of mold in her fathers home. A full refund was given as well. We wish her father luck with getting the mold taken care of and recommend to not use bleach as she wants to use.
5.0

Josh and his team are thorough. They did an amazing job, answered all of our questions and were completely professional. Would definitely recommend

Excellent customer service. Job was done on time, within budget and very happy with the results. If you are looking for a reliable company to do the work I recommend them highly!

Job went well, very clean process through and through. Would recommend!

This team was great! Very professional. Kept me informed every step of the way. Friendly, personable and did a terrific job.

Great! Sal and Francisco were excellent workers. They explained everything they were doing and answered all my questions. Everything was left neat and clean. Highly recommend them. Also Tonya the coordinator and scheduler was wonderful to work with and made everything easy!

Very prompt and was very easy to talk to, I called on a weekend and was able to talk to someone right away. Josh sent a quote the same day as the inspection and I was able to schedule with the office within a week! The guys who came and did the work made sure my questions were answered. Overall GREAT job.

Advanced Environmental did a great job, and I have hired them to complete a second job for me.

Thank you for your awesome review!

BBB accredited business. 10 Employees. Cost is determined by the job. No travel charges.  …

We specialize in drywall installs, repairs, finishing, and more! We guarantee your satisfaction, and we won’t leave until the job is done right. We pride ourselves on the quality work we provide, while delivering great customer service! Check out all the services we offer below and call -or- click to schedule a free estimate today!  …

Life Safety Services is a professional environmental consulting company specializing in Residential and Commercial buildings. Established in 2006 our staff consists of Inspectors and Consultants. While we can handle any size environmental project, Life Safety Services specializes in Residential and Commercial applications. We care about your property and can provide solutions for a healthy home. www.nylifesafety.com  …

Advanced Environmental & Restoration Services is currently rated 4.5 overall out of 5.

Are there any services Advanced Environmental & Restoration Services does not offer?