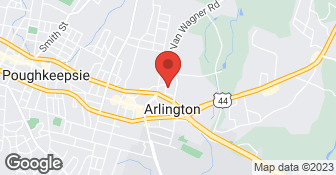 We are family owned & operated for over 40 years. We service the entire Hudson valley area including Dutchess, Putnam, Westchester, Rockland, Orange, Sullivan & Ulster Counties. WE do not subcontract out any of our work. Most of our installers have worked with us for 10+ years. Whether you need an estimate, service call or have a general question We are the company to call. We answer our phones personally from 7:30 am to 5:30pm....

Great work by Dutchess Overhead Doors! First Met with Tony who was punctual and very pleasant to deal with. He was very easy to talk to, answered all of my questions, and was very responsive to my emails and calls. He came to the house and delivered a quote when he said he would. He also managed to schedule it for a time which was convenient for me which was a huge plus. The finished work ended up in a HUGE improvement and upgrade to my home! The installers Matt and Mel got to work early, were great to deal with, made sure the job was completed exactly how I had requested after speaking with Tony, and made sure I knew how everything worked before they left. I can't say enough how please I am with the finished product. I never thought I could be so happy to just look at garage doors (lol) but they came out so well I kept looking at them for days. Great experience with this company and would recommend highly to anyone looking to get this type of work done.

Description of Work
Replaced two garage doors (and their tracks, springs, etc.) and added an electric opener for the one door that didn't previously have one.

Excellent from office staff to installer. Kelly and Brendan were a pleasure to deal with. He was actually early and did a very thorough job, exactly what I asked for. Courteous and prompt. Would definitely recommend this company.

I would not give them an A. Somebody on the phone kind of has an idea of what is wrong with you and tried tries to tell you how to do things. One screw wasn't enough, that kind of thing. I have no relationship with them, believe me. They charge for a service call and I guess since I am out in the country that is reasonable. I would say the price is okay. They have fixed everything okay. Once you get them to commit to something they do seem to come out. In the past I had an issue with the garage door openers on both of my garage doors. It happened on a Sunday night. They are hard to reach on weekends. I spoke with them Monday morning and they said they could not send someone out immediately. I asked them to send someone over to shut the garage door openers so I could leave the house at noon that day. They may not have enough staff. I am in a rural area so it is not like it is next door and someone can come over. I understand that. The things they have put in have done well. I upgraded the garage door openers and they do better now. I give them an A for workmanship.

Description of Work
I used Dutchess Doors to replace the strip along the bottom of the garage door. The guy came in and put in about seven screws and it stayed. It probably will now.

I was contact by email the morning after I initiated contact via Angie's List. An appointment was quickly set up for the following Monday. Anthony arrived early and called to let me know he was there- I was getting home earlier than expected so this worked out fine. He was very friendly, professional, and courteous. He did measurements and went over a number of options available. He answered my questions completely. He promised to email his proposal the next day; there was a problem with the email address he had but he did call and let me know- after that was straightened out I had the estimate in less than an hour. It was accurate, provided the cost of the options we had spoken about, and explained well. In the end, we received a proposal identical in scope-of-work that came in for about 7% less, not including the Angie's List discount offered by the second provider,which made the difference more. However, based on my interaction with both Anthony and the office staff I would not hesitate in directing people to them.

Excellent. The Dutchess Overhead Doors Installer arrived on time with 2 new garage doors. He removed old doors, installed and adjusted new doors on time and as promised. Have had NO problems since installation. Highly Recommend them.

It went very well. He looked at the system and found it was a simple fix. He made the simple adjustment at no cost.

Description of Work
I'm sorry about the date inaccuracy. I didn't write it down. What I do remember though is that he made himself available to come before we had to leave for work. He checked on the garage door.

The Sales Representative was very knowledgeable and provided me with many door options. I selected a garage door (with high insulation value) that I believed would best fit the style of our home. The installation took about 2.5 hours. The crew took time to accurately seal around the door to assure that there would be no drafts. The garage door looks great!

I was pleased with the service and haven't had any trouble since. I cannot remember the exact date the service was performed.

I left a message for them after hours early in the week and not only did they get back to me quickly, but they even installed both door openers within the week! Living in Pine Plains it can be hard to get people to get back to me, but they were amazing. They did the job quickly, accurately, and at a great price. I would recommend them to anybody who needs garage door openers!

Thank You [Removed member name] for the positive feedback. We appreciate you taking the time out to review your positive experience. If, you have any questions with your new operators please give us a call.

Garage Owl provides Overhead door installation and repair. We're a new, up and coming Garage Door Company offering top quality workmanship with several years of experience. We offer warranties on our repairs and installs. We're owner operated and dedicated to providing quality service to all of our customers. Please call us or click for a free estimate today!  …

We do not offer service or installations of hollow metal doors.

Dutchess Overhead Doors, Inc. is currently rated 4.8 overall out of 5.

No, Dutchess Overhead Doors, Inc. does not offer a senior discount.

Dutchess Overhead Doors, Inc. offers the following services: We install residential & commercial garage doors. We service all brands & models of doors & operators either in a residential or commercial setting.

Are there any services Dutchess Overhead Doors, Inc. does not offer?

We do not offer service or installations of hollow metal doors.