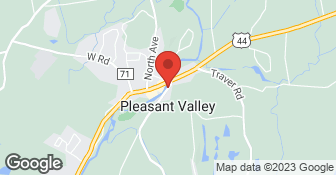 Chefalo Carpentry is located in the Hudson Valley. With over 25 years experience, we will work closely with you in order to bring your home ideas to life. We tackle every project with perfection, from brand new homes to smaller side projects: 3,000 square foot homes to single living areas. Some of our customers have been doing business with our family for over 20 years, so our work is highly respected in the Hudson Valley....

A family owned business since 1963. Proudly serving Dutchess County and the surrounding area’s. We offer quality service at an affordable price. Contact us today about an estimate!  …

At Clover Painting Corp our customers needs are the utmost importance. Our team is committed to meeting those needs. We welcome the opportunity to earn your trust and deliver you the best service. No job is to big or too small, please contact us for a free estimate!  …

We have over 14 years of general remodeling experience. Our goal is to ensure that our customers are 100% satisfied. We offer quality workmanship. We take pride in remodeling your home. We have done all types of home improvement projects from new hardwood flooring installation, kitchen and bath remodeling, interior and exterior painting, all ceramic tile backsplashes and any type of flooring. Call us today for your free estimate. We would love the opportunity to make your dream home a reality!  …

Very happy with the end results of the project. Very easy to work with, on time, answered any related questions and did an excellent job. Would be happy to hire again.

Description of Work
Adding a second floor dormer and completing all exterior work.

I've gut renovated two other houses that I've owned and lived in. This was the worst experience by far. Though his sub contractors were good, Chefalo was not. The stuff that Chefalo's crew did was a rolling string of problems. In spite of having promised to physically be present every day to supervise work, neither Evan nor Joe were on site most days. I specifically asked Evan about the tenure of his crew and he lied to my face. He told me everyone that would be onsite had worked with him for many years. In fact some of his guys who had worked with him that long were pretty good. Unfortunately, the guys he had on site for most of the project were folks that had been working for him a very short time and he clearly didn't have any reason to believe that they could be left unsupervised. It was just plain negligent. He left these guys to work mostly unsupervised, then acted surprised that it didn't turn out well, and tried to lay blame at my feet for various parts of it or justify that it really wasn't a problem, just a matter of opinion. They had 6 or 8 different people roll through to work at different points in time and as a result many balls were dropped and details lost. A few of their guys were very competent but they seemed to shuffle them around the many jobs they had going at once. One guy who had worked for Chefalo less than a month was left to work by himself unsupervised for weeks. In that time, he dropped and broke a $1000 stained glass door (which Chefalo never paid for) and botched our kitchen cabinet installation (damaging visible cabinet surfaces and changing the layout of the kitchen from the plan). After they fired him and fessed up that he'd be new with them, they sent two more guys to finish carpentry and complete the kitchen installation. One of these guys was brand new with him (<1 month) having come from a roofing company, and the other also not a long term employee. They were clearly not sufficiently skilled at their trade for the tasks assigned because pocket doors were installed incorrectly requiring significant re-work (one still not closing properly). Hinged doors were hung over hardwood floors with 1"+ gaps under them. They initiated refinishing the main stairway banister (not requested, not in scope), but then did so by top coating the banister with oil stain right over the poly (which of course had to then be redone). They further botched the kitchen installation job mounting crown molding with trim screws through the face, face nailing cabinet panels on rather than screwing from behind, punching brads straight through to the insides of my cabinets, making sloppy cuts for trim and moldings leaving gapped joints, and other general cosmetic botching of my kitchen finish. My dishwasher was dented during installation. Not only did Evan not supervise his crew but he was personally responsible for the work on several of the sloppier parts of the project including improperly mounting the shower trim in our steam shower and forgetting to install the tub overflow drain for our master bath (resulting in a waterfall through my kitchen ceiling). One of my three shower heads in the steam shower still doesn't work. There were two chips in my brand new jacuzzi tub because they left it sitting unprotected in the work area while they worked around it. I found out some time later that they also didn't hook up the overflow drain in my guest bathroom (waterfall through my living room ceiling one evening while I watch TV and my teenage son took a bath upstairs). All the while that he and his guys were botching up the renovation, Evan made sure to point his finger at me and try to spread the blame. It was a constant pattern of two steps forward, one step back. Not only was the quality of work unacceptable by any standard, but I just couldn't take Evan's unprofessional attitude, gas lighting, and finger pointing any longer. Though each time a new problem popped up they insisted that they would come back and fix everything, in the end, I had to terminate the relationship. Evan was a very nice and reasonable guy when there weren't any problems. His partner Joe seemed a nice guy as well. I know they wanted it to all work out. If I could have cherry picked two or three of his guys to do the job start to finish, I think it would have gone alright. Unfortunately for me, it didn't work out that way. Poor supervision. Sloppy carpentry and plumbing. Unprofessional interactions. Bad experience. The only reason it's a D rather than an F is that his sub-contractors did good work. I have a thousand photos and all of his text messages and emails archived for reference. I won't respond to him or have any back and forth about the review. Just know that it's all well documented. Good luck.

We have been very happy with Chefalo's work. From our initial meeting, they were professional & knowledgeable about construction, plumbing & electrical work. They are dedicated & accurate with their work. Chefalo completed our jobs in the time estimated and the end product is great!

They had a big job on a very old house-professional & excellent all the way through. Trustworthy!

E Chefalo was courteous, patient and attentive from start to finish, he was knowledgeable about what was needed for the renovations. His workers were prompt, polite and respectful leaving the work area clean and ready to reinhabit when done.

Description of Work
After a flood caused by septic problem. Evan Chefalo guided me through the restoration process, he quickly assessed the damages negotiated with my insurance company and cheeked to repair the living area in addition he helped me do work with my town to get permits needed to add shower to a small 1/2 bathroom.

Went well, they did & nice job.

We were very happy with Chefalo Carpentry and plan to use them again. The quality of their work was very good, they were conscientious and worked h****** the job. Evan is very easy to work with and it was clear that he wanted us to be satisfied and get the job we wanted so he was always responsive. Their price for the bathrooms was very good compared to other bids we received, the quality of the work was high and they were a pleasure to work with so we look forward to working with them again.

Description of Work
Chefalo Carpentry renovated three restrooms in our office building. The work involved demolishing the spaces including removing ceramic tile from the floors, rebuilding the walls, installing wall and floor tile. In the ladies’ room they built a lighting soffit over the sink area and installed a double-sink lavatory area. Construction of a barrier free individual restroom involved expanding a utility sink area. They installed new toilet partitions in the ladies’ and men’s room.