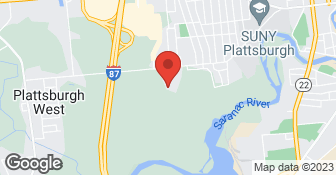 Not having any more electrical issues.

Description of Work
We had a receptacle in the living room that was not working. He traced the problem to the outlet on the prior wall and fixed it. Only took about a half hour and he was very courteous and professional.

Description of Work
They wired our hot water heater, and they ran a circuit that changed our stove from gas, to electric. Very happy with the quality of their work. We also did not have to wait long for the appointment; they booked us for the next day when we closed on our home.

Description of Work
Switch out light for new one. Install outlet. Assorted other small electrical jobs.

Hourly rate is per technician. Not made clear when I called ahead. Had to come back a second time to fix vibration. First technician left lots of insulation around heater off to side. Upon my inspection about a month later, looks like hoses are duct taped instead of clamped down and modifications made to stop vibration were handled by not putting unit flush b/w beams. Overall disappointed. Job took 3 hours to swap out exact same unit, taking into consideration time put in on both trips to fix issues.

Description of Work
Swap out heater/fan for bathroom

Description of Work
Hooked up electric outlets in basement for elec. dryer. Checked the system in place. Installed safety outlets in 2 bathrooms (we had the outlets already).

Ace responded quickly to repair a malfunctioning baseboard heater in an apartment I own attached to my house. Fred from Ace Electric kept me informed by phone every step of the way. He expertly diagnosed and fixed the problem in no time. Their bill was extremely fair and I'd recommend them to anyone, period.

Due to an unexpected time constraint, some of the first floor work was postponed till later however ACE was able to replace all the most critical wiring going to the kitchen, laundry area, bathroom and channel all that wiring down to the basement panel. They did an excellent job and were quite flexible with the schedule I had set. The cost was a slight bit more than I had anticipated but the quality of work was worth it. I plan to have them come back and do more electrical work in the rest of the house until I have all that old knob and tube replaced!

Description of Work
I need to have the knob and tube wiring in my house replaced but needed to do the work in phases. The first phase was to replace the old wiring on the fist floor, remove the electrical panel boxes in my laundry area that still had old wiring going to them and channel all the wiring down to the new panel in the basement.

I was told by the contractor hired to install my hot water heater that I had the wrong gauge electrical wire required for installation. That contractor explained that I had 12/2 wire installed, that I needed 10/2, and that he did not work on electrical. I called ACE after noon on March 18 and explained my situation to the woman on the phone. She took my information and advised one of the technicians would call me back to set up an appointment. Less than 2 hours later I received a call from Shane. Shane was very polite and set up an appointment for 8 a.m. the next morning. I was very apprehensive about the cost of getting electrical work done but Shane was able to give me a very detailed estimate on how much it would cost including the service charge and the cost of the various materials he would be using. Shane arrived promptly, in the middle of a snow storm mind you, a few minutes before 8 a.m. We went to the basement where Shane took one look at the wire and immediately identified it as 10/2, the very wire I needed to "have installed." He checked the wires in the circuit breaker box to verify and just to be thorough, even checked the wire that fed into the water heater. He concluded that my contractor was looking at the water heater's thermostat wire, which was indeed 12/2, but that the wire from my electrical box to the water heater was definitely correct. He arranged them side by side and showed me difference in size between the two. Shane was also kind enough to tighten some loose wire connections he found in my circuit breaker box. When it was all done, Shane waived the service charge and I ended up paying nothing. The only thing I could give him was my immense apology that he had to drive out in the middle of a snow storm for nothing. While I obviously don't want to be forced to have electrical work done any time soon, if it did need to be done I would call ACE back in an instant.

Description of Work
ACE was hired to install a run of 10 gauge electrical wire from my circuit breaker box to my hot water heater.