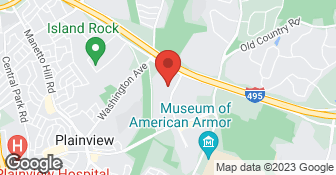 GarageTek gives you the garage you've always wanted one that suits the decor of your home and the lifestyle of your family. The process is so simple. Our garage consultant will visit your home and create an exact color rendering of your garage. Then in just 1-2 days you will have a new room that is safe, functional and beautiful. Additional Phone - (877) 625-6186. Additional DBAs - GarageTek, Catalano Enterprises LLC. Additional email - longisland@garagetek.com....

Zone Garage Eastern PANJ specializes in epoxy coating for your garages, porches, basements. We provide quality work and your satisfaction is important to us! Call us today for a free estimate!  …

It was a process rightsizing what we had ordered so it could fit in the garage and be most functional. But we did it and the results are great.

Description of Work
They put in a complete garage system, soup to nuts.

They arrived when they said that would. Worked very neatly and the job was done in two days.

Description of Work
Took the whole garage apart and added cabinets, shelves, flooring. It looks wonderful. It could really be a room.

The service went great. Two technicians came out and completed the job in 2 days. They did everything as promised and completed the project as scheduled. They even came out a day early for the service. They were great at cleaning up after themselves. The pricing was a little higher but the quality of service is well worth it. I had no problem at all scheduling the service and they entire project went smoothly. I would highly recommend the company to others.

Description of Work
I hired the company to renovate the garage including racks, flooring and shelving.

The experience was fine. They did exactly what they said they were going to do on time and for whatever the quote was. The cost was fair. Their punctuality was fine.

Description of Work
They installed their system into my garage including the flooring.

The service was great. They were prompt, reliable and there were no surprises. Everything has pretty much lasted like it was supposed to. My interaction with them was good.

Description of Work
They did my garage all over including their flooring, walls, cabinets and everything.

This was great. GarageTek did an excellent job. It was an expensive project; however, it is worth every penny. The staff were helpful and answered all our questions. Even though we had seen drawings of what the project would look like when completed, we were not prepared for the finished product! GarageTek exceeded our expectations. We love the GarageTek system.

I've had GarageTek for several years and I LOVE IT!. It is the single best home improvement project we have ever done. I use it every day. By installing a GarageTek system, I have been able to organize all the tools, toys, bikes, and other stuff ... but I was also able to CREATE storage space. After installing a GarageTek system, I am actually able to store even more stuff in the garage, but everything is neat and organized. The best part, is that I can FIND stuff. Everything has a place and everything goes back in its place. I had several quotes from different vendors, but I chose GarageTek because they were the most professional ... and the were the only ones to offer a LIFETIME warranty! They came to my home and gave me a verbal estimate, which is basically what everyone else did. However, the GarageTek designer followed up with a very professional 3D rendering and wall elevations so that I would see exactly what the finished project would look like. No one else was able to do that. I was very impressed. On the day of installation, the team arrived early, cleaned out the garage (I didn't lift a finger) and worked all day. They were professional and hard working .... they didn't even want to stop for lunch! On the second day, they arrived promptly and by the end of the second day my garage was transformed. It was amazing! They put away a lot of the heavy stuff like ladders, the bikes, heavy boxes, etc., and the remainder of the stuff they left stacked in my garage. It took me an afternoon to put things away and organize everything exactly the way I wanted it. The nice thing was, the GarageTek team hauled away a lot of the junk that I didn't want and didn't know how to get rid of. That was a big help! I probably would have had to hire a dumpster to get rid of all that stuff ... so it saved me a lot of money and time. So, I've had GarageTek for a few years and I've added some bikes, golf clubs and I needed some more storage. The GarageTek team came back and rearranged things, delivered and installed additional cabinets and shelving and now my garage is perfect! My garage is the envy of the neighborhood ... and in fact, many neighbors have installed GarageTek systems after seeing the transformation in my garage. Thank you GarageTek!!!

Description of Work
I had my garage "GarageTek'ed" a few years ago and love it. I needed a some additional shelving and cabinets and I wanted things to be cleaned up and rearranged.

The experience was just fair. I like the product, but they oversold me on too many accessories. I did not like that.

Description of Work
They redid my garage.

Description of Work
They redid the garage when we bought the house.