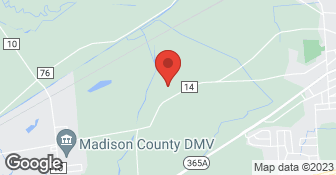 KC Curb Appeal was established in 2009 by a landscape professional who had experience in Landscaping, Hardscapes, Lawn Mowing & Plowing for over six years. KC Curb Appeal has been a successful growing small business in Central New York. With little advertising the company has grown by word of mouth. KC Curb Appeal thrives on quality work and making sure the job is done properly the first time. Our company offers free estimates. Please give us a call today!  …

A-1 Tree and Stump Service

A-1 Tree and Stump Service is a locally owned and operated tree and stump service.  …

I called Karst Tree Service and made an appointment with Terry Karst to get an estimate on some tree trimmimg. He stopped at my house, gave me a verbal price to which I agreed, and he said he'd be out to do the work in 8 to 10 days. I asked him to call me the day before, so I could get the time off from work to be at the house during the work. He never called or came out to do the work in that time. After 12 days, I called him and he told me that he'd noticed that my yard seemed low and waterlogged, so he'd been waiting for my lawn to dry out enough to drive his truck on it. I told him that he should have asked me, as we are at the top of a rise and the yard is quite dry. He said okay, he'd be out that afternoon, but I reminded him that I needed a day's notice to be off from work. He offered to come out the next morning, and I said okay and asked how early to expect him. He replied that we'd be the first job, and he could get the truck and crew to our house by 9am, and we agreed. The next morning 9am came and went, with no call from Mr. Karst. I called him at 9:25 and asked him if he was sick or at the hospital. He replied no, that he was working in his garden! I asked about our 9am appointment, and he said his crew ran into some problems and they'd be out soon. I said that "no call-no show" was not the way to run a business, and suggested that when he realized the crew would be late, that he as owner should have called or come himself. He replied that he thought I should get another company to do the work. I cannot recommend a company with as many excuses for failure as Karst Tree Service.

Description of Work
Missed his appointment & failed to call

Returned my call a week after I contacted them. Someone else had removed the downed tree by then.

They were excellent. I liked their timeliness when they showed up and how much they cleaned up and you never know they were here and they did a beautiful job. They were referred to me by a friend, so I had got a good deal.

Description of Work
I used American Arborist Corporation for tree service about two years ago.

Complete tree and landscaping and certified consultations with evaluations and appraisals.