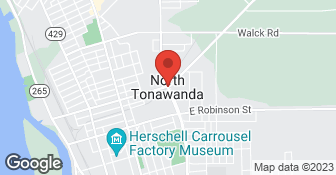 All phases of home building/remodeling/repair/improvements....

He gave me a time n was there on time. Surveyed problem told me what had to be done and proceeded to correct the problem. ASAP if I had any more problems with it let him know and he'd be back. Very professional and courteous

Description of Work
Called Ted and explained how roof had built up with ice.

I had previously used Ted on an prior home and the roof install went well although we had a leak after the install. Ted responded right away and fixed the problem. Ted was on site during the install and his crew was professional. The price was very reasonable and he came highly recommended by two of my colleagues. When the time came for my new house roof we used him again (after getting bids from other contractors). He was consistently the middle bid. This time Ted was not present during the install. About 2 years later when Ted was installing new shutters for me I asked him to look at the ridge vent because it was coming detached and raised in a few locations. He said it was ok (without actually going on the roof). About two months later after a winter storm and melting of snow we ended up with water coming through the attic. For several years the problem with the vent continued. He honored the warranty but never seemed to fix the problem. We have very poor ventilation on our 2nd floor and it is likely due to an ineffective ridge vent. I am now out of the 5 year warranty and the problem still has not been fixed. Another contractor told me that they installed it incorrectly and will be fixing it. In short, Ted is fine for small jobs (aluminum wrapping of wood features and installing porch columns, which he also did just fine for me) but I would not suggest using him or his company for roof projects. It is very hard to get in touch with him and the quality of the work is suspect (as evidenced by my two leaks on two homes) as I do not think his crew is well trained in proper installation methods. I had previously recommended him to friends and he did good work for them but unfortunately given my repeat problems I can no longer recommend him.

Sorry, can't remember but my late husband was pleased with the work and cleanup.

Owner arrived as promised to give a detailed estimate. I checked his background and found no complaints with the Better Business Bureau. People in the area had used him and were also pleased. Other roofers gave me estimates as high as $15,000.00 and some had had claims against them. His price was reasonable and we signed a contract. Workers arrived as promised on the job and cleaned up each day until the roof was done three days later. I would recommend this contractor.

Thank you! Pleasure doing buisseness with you.

Magic Stone is open for the new season, the fastest way to reach us is to call our office directly at 716-775-5836 we would be happy to schedule your estimate. Super Service Award Winners 8th Consecutive Year! A+ BBB Rating • Magic Stone GC is a Locally Owned & Family Operated Company that has been in Business For Over 18 Years! • Fully Licensed & Insured. We Offer Free Project Estimates to homeowners. Over 30 Years of Experience in the Masonry Repair & Restoration Industry and learned our trade from a well sought-after restoration specialist who has since retired. • Call (716) 775-5836 to Schedule your FREE Estimate or Appointment.  …

Solid reputation build on trust and years of experience! We offer an array of services! No job to big for us to handle! Family owned and operated since 2012. So Many happy homeowners and completed projects across Western N Y Call us now 7163802611  …

Harmony Homes Inspections and Rehab specialize in inspection services, for sale and presale of existing homes and new construction! We pride ourselves on the quality work we provide, while delivering great customer service! Check out all the services we offer below and call -or- click to schedule a free estimate today! "We take our inspections to heart because Home is where the Heart is " (716)863-4343  …

Rainbow Roofing & Siding Co is currently rated 4.5 overall out of 5.

No, Rainbow Roofing & Siding Co does not offer eco-friendly accreditations.

No, Rainbow Roofing & Siding Co does not offer a senior discount.