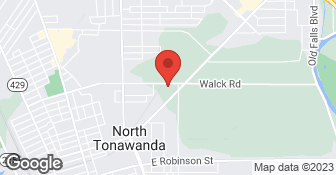 2014 Super Service Award Winner in Roofing, Windows and Doors! In the past 25 years, Ivy Lea Construction has become the leading full-service remodeling firm in the Ken-Ton area. Our name has become synonymous with quality, complete customer satisfaction, and excellence… one job at a time. Ivy Lea Construction specializes in every aspect of home remodeling: custom built additions, kitchens, bathrooms, roofing, siding, windows, doors, and concrete projects. No home improvement project is too large or too small. From the custom addition that you always dreamed about, to a small repair like a new storm door, Ivy Lea Construction will bring out your home’s full potential whatever the size of the job. Through the years, Ivy Lea Construction has developed an excellent approach to improving your home. Our winning team starts by listening to the needs of each and every customer, and tailoring all designs to their specific aesthetic and budget. All questions and concerns are addressed with a detailed design proposal. The design is then put into production, where qualified craftsmen work to ensure a high quality end result that is both beautiful and functional. Our emphasis on teamwork gives all members of Ivy Lea Construction an opportunity to make a huge difference. We have found that this process yields the most successful and satisfying renovation experience for everyone involved. Additional e-mail: kate@ivyleaconstruction.com....

we had 10+ double hung windows, a new slider & a new door installed. we selected our Sunrise windows & immediately noticed the difference in our comfort level this past winter; even in the summer with no A/C, the house stays a lot cooler than before. I was a little nervous since this was going to cost a good amount, so I researched forever (it seemed), interviewed a few folks re: costs, & decided on Ivy Lea. I wanted peace of mind in case of any issues, now & down the line. I wanted quality windows & professional install. the entire process of working with Russ, choosing products & securing financing was easy. the installers were prompt, skilled & personable. we were so happy with the window process that we're back again this year working with Russ on a much bigger project!

The crew started everyday around the same time, the work they did was good. There was total respect for us and our property. Nick who was in charge of the crew was a pleasure to work with.

The guy was very nice that came out to do the estimate but when the estimate came back it was a ridiculous price 23K for small roof. I found another reputable company that did it for 9k big difference in price for the same job

Workers were very helpful and experienced. Usually on time, kept to their job. Disappointed in delay of starting date.

Description of Work
Installed leaf relief guards in gutters to keep out leaves from blocking utters & downspouts to function properly.

Workers were great, helpful & explained everything.

For the home energy audit, they were very responsive during the time they were trying to get the application from me. After I submitted all the paperwork on about 7/7/17, I never heard back until 6 weeks later! A message was left for me that my bank account info was needed....I don't think so. I will be using a different company for this audit. For the garage estimate, I had originally scheduled the appointment for July 28th. The rep called and asked if I could reschedule the appointment for the next day. I had no issue with that, since it was a Saturday. He arrived on time. Where I was taken aback was the verbal ballpark estimate the rep gave me. Granted, my garage is in pretty bad shape, at the very least it it needs a new roof. I felt like the estimate was outrageous, $20,000-25,000 for a new roof, tearing off the front overhang and stabilizing the foundation. I also asked for an estimate for a total tear down and was told it would cost $15,000. I got the impression that this company had no desire for my business. That instinct was further reinforced when I never received that estimates I requested. It's September 25 and I still haven't received anything. I will not be doing business with this company, ever.

Description of Work
I had two requests for Ivy Lea. First, I wanted to set up the free home energy audit. Second, I wanted an estimate for work on my garage.

Great customer service! The job was completed a week sooner. The contractors were very friendly and they did an excellent job. The work area was cleaned daily. I will definitely refer the company to family and friends.

Description of Work
I had a mud room constructed off my garage.

Very pleased. Door looks like it's always been there.

The representative from Ivy Lea came out promptly after I called, and was very professional. However, I did not receive and estimate for 2 weeks, and the price was double what I ended up paying.

Work was done efficiently by two workers who were careful and very pleasant to have around. Cleanup was perfect.

Description of Work
Removal of existing windows and installation of new thermopane windows.

on time, daily cleanup, additional costs were part of bid as it was roof tear off and new wood had to be installed.

It went fine. Weather was cold and beams were heavy.

Prompt, on time and professional;, very neat and cleaned up everyday

Great, the crew was very professional and competent

The initial contact and measuring of the windows went very well and signing of the contract in October. The windows were not installed until January. Before the work got started I eliminated and outside job also to be done. The down payment money was quickly refunded and changes accepted.

Beautiful work. Punctual and clean. Strong warranty. Pleasant Workers. Good follow up. Price was steep, but it was a big job that no one else wanted. Treated us very well.

The work was performed in a timely manner. They handle the Preservation requirement.

Excellent workers, Foreman was great with suggestions to improve project. Top notch construction. Very dedicated workers, owner on job site. Frequently. Well side the house in the spring. Cannot say enough good things about this company the experience wks great from start to after the finish.

Very well. All projects were completed at high level.

All personnel involved in the project were personable, professional & perfectionistic. They arrived on time & showed everyday from start to finish. The price was reasonable compared to other quotes we received. Attention to detail was applied to the project by the owner & worker. Excellent company!

Description of Work
A 1/2 bath was installed in the basement. New drain pipes were also installed under cement floor.

The Ivy Lea team stayed on top of things and were in constant contact with me regarding the different stages of the project.

Well. Prompt, down to earth advise.

Description of Work
I was seeking an opinion of a home to purchase . It needed a lot of work.

Excellent work - came when scheduled, cleaned up, and did quality work on everything.

Description of Work
Rebuilt porch and sided. 2 sides of house.

Brownsview365 is a professional and licensed handyman repair company. With more than 20 years experience, whatever project you have in your home. We can get the job done.  …

Wing Painting & Wallpapering is a full service professional contractor. We are fully insured and have been in business since 1976, serving Buffalo and the Western New York area. We accept all major credit cards. Special care and attention given to protect all floors and personal property. Additional email - wingptg@verizon.net.  …

Fully-insured, PV Painting and Decorating manages interior and exterior painting projects for residential and commercial settings. Established in 2011 in western New York, PV Painting is operated by Petar Vukadin, a well-experienced and professionally trained painter. Prior to moving to WNY, Petar perfected his craft as a union painter and independent contractor in Chicago, Illinois. His exceptional trade skills, knowledge, and work ethic are evident by the quality of his work and excellent customer service.  …

Ivy Lea Construction is currently rated 4.6 overall out of 5.

No, Ivy Lea Construction does not offer free project estimates.

No, Ivy Lea Construction does not offer a senior discount.