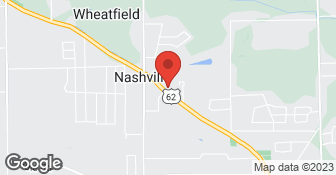 We are currently booked with fence installations and repairs through roughly late September/ early October 2021. Fence staining is booked until roughly summer of 2022. We are currently booked for quote appointments into late May/early June 2021. Sadler Fence and Staining LLC was opened in 2008 with a business model focused on customer service. By using quality products, practicing sound installation techniques, and building long-lasting customer relationships, we plan to become a strong competitor in the Western New York area.

Fences Unlimited is a locally owned and operated company serving our community for 10 yrs.We have over 46 years of experience among us,

Very well. My fence is pretty old and there were others that wanted a lot more money to repair.

DESCRIPTION OF WORK
Basically I had a portion of the existing black chain link fence extended along my property line and a gate installed on another portion of the existing fence. This part of the job was done very well. Now we come to the other portion which involved installing a white vinyl picket fence with gate along one side of the driveway connecting the garage to the house. The work started late in October and was delayed for a few days during the week due to rain. There was an old wooden gate post set in concrete along side the driveway which was removed before work began. It was so loose in the ground had it not been for the concrete anyone could have pulled it out of the ground. When the work was finished approximately a week later the fence looked lovely. After the winter I notice that the post in the same area as the old one that was removed had heaved up about 4-5 inches. This caused the next post to become out of line and now the gate wouldn't close correctly because of the misalignment. And my little dog could squeeze under the fence which I had installed to keep him in the yard. I called Imperial fence in early April 2014 and told them of the problem that had occurred over the winter. I was told that they were not responsible for the concrete at the base of the posts. Really!!? I do know that we have clay soil in the town and this type of soil holds water. Therefore Imperial insisted that it was due to a water issue. Because the wooden post was so loose I would have thought that they would have taken extra care in installing the new vinyl post in that area. I truly believe that they did not go below the frost line. Anyway, following the endless and might I add stress inducing communication with them by phone, certified letters, and finally preparing to go to small claims court I got a call telling me that the fence would be fixed. And finally in October, almost 7 months after my initial call, they came out to repair the fence. The troublesome post was removed and reset. The gate was removed and holes drilled into the bottom piece of the gate for drainage because moss was growing along the bottom of the pickets that were inserted into this piece. He made sure the fence was level and that the gate closed as it should. I was happy with the results. Following this winter the same post that raised has now sunk into the ground a couple of inches. So be it. Bridges can be built over water but I guess fences can only be built on solid ground! No I will not call them again ever.

Gate broken within 1 year.  Provider refused to honor warranty, actually denied providing a warranty. The warranty is clearly stated on the contract. Provider would not meet one on one with purchaser to discuss the situation further. Horrible "customer service", family owned and operated, and that was a problem.  Daddy would not question what the son said, simply took it as fact.

The fence looks great. We are very pleased with the work. The crew was very efficient and kept busy all the time they were here. The job was finished on time. We highly recommend them.

THE WORK I WANT DONE: I requested an estimate for a fence at my home in Tonawanda around 4/18/2012. I was contacted shortly thereafter and we set up an appointment for early the next week. The salesman was very nice, professional, and knowledgeable. The job I am planning involves approx 33' of 6' high pressure-treated privacy fence (1x6x6 dog ear straight top, 45 degree tops on 4x4x10 posts and 1 ...

DESCRIPTION OF WORK
Estimate only.

General Information
Free Estimates
No
Emergency Service
No
Warranties
No