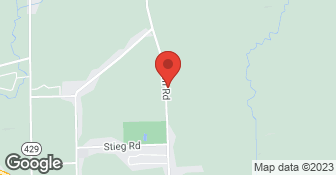 Fences Unlimited is a locally owned and operated company serving our community for 10 yrs.We have over 46 years of experience among us,...

My neighbor and I are supposed getting fencing done by this company. She paid her 50% deposit in February 2021, I signed on for my little area in early April and paid my 50% deposit. We were told by End of May or 6-8 weeks and it would be installed. We have contacted them multiple times and have not gotten any updates on when thus will happen. I now gave a dog and she has been putting of landscaping due to the installation process. It’s very unprofessional and we are about to ask for our money back. Would not recommend them to others.

Mrs. [Member Name Removed] I am very sorry for the lack of communication regarding your fence project. Your fence was ordered along with your neighbors fencing we are at the mercy of the manufacturer and aluminum has been a 14 to 18 week for production and shipping of orders. Your order should be in very soon I will call or email you tomorrow with a up date as time of shipping and installation date, you can call Mark or me direct 716 998-3659 Richard but I will have an answer tomorrow for you. Thank you for your time and patient during this time . Richard Owner
5.0

The 3 pleasant gentlemen that came out on Friday 12/4/2020 to put up my fence, did a nice professional job. My family like my fence but I love it Shirley A. Thank you!

thank you for your business and happy holidays
5.0

Perfect! Fences Unlimited should be your only choice for any type of fencing you would like to add to your property. We contacted several fencing contractors and not only were they the most prompt to reply but scheduled an immediate appointment to provide an estimate. Mark was awesome to work with. He thoroughly explained the options and provided several alternatives. We were pleasantly surprised when he provided the cost estimate. It was not only extremely fair, but the method Fences Unlimited uses for installation is by far the best in the area when compared with their competitors. Mark provided a very realistic installation date which the company adhered to. Paul contacted us ahead of time, advised a delivery and installation window several days before the designated date, and then contacted us the day before and the day of the project to confirm the time. Excellent customer service to say the least! The crew was friendly, knowledgeable and very efficient. This was all around a great experience. When we decided we needed a gate revision, Paul and Mark promptly responded and once again proved Fences Unlimited is an exemplary company and graciously met our needs, once again, promptly and fairly. We highly recommend Fences Unlimited for any fencing need you might require in and around Erie and Niagara County, NY. We guarantee you will not be disappointed!

They were very professional and helpful. The home owner was very pleased.

Description of Work
Repair of a chain linked fence

Excellent I couldn’t ask for a better experience the salesman Richard was on time very knowledgeable made some nice recommendations on layout and styles. Paul kept me informed as to schedule and the crew was very polite and professional cleaned up when finished and it was completed in just two days and the pricing was very fair would hire them again and would refer them to my friends and family

Description of Work
408’ of pressure treated fence with two gates

I had an appointment set for today at 3 pm. At 3:40pm I was calling the company to see if they were on the way. No answer so I left a message. No return call.

I am very sorry for your inconvenience your salesman's father went into the hospital un- expectedly and isnt doing very well I will gladly set up an appointment with another salesman if you would still like us to come out thank you for your understanding in advance
1.0

In March of 2019 I contacted Fences Unlimited to repair a section, and install a new section of fence. After receiving a few quotes, I called Sue to let them know they'd won the bid. The next step was a deposit and determining a work date. Four months later, and at least 20 phone calls, I finally heard back and was able to give an deposit. A month later, I called for an update, and they had "forgotten" to order my materials, and the work wouldn't be done for another month. I was PROMISED a date in September, but at the end of that month, and additional phone calls later, I was told NOVEMBER. Disgusted I said, absolutely not, now or never. Two weeks later, the work wasn't scheduled, the job was never done, and I asked for my money back. Miraculously they had a sudden opening for service, but I declined. That was six weeks ago, and I still haven't received my money back. This company is fraudulent, and I'm disgusted I ever put my truck and money in them. Stay away!

3/11 Customer called for an estimate 3/15 Estimate done 5/31 Called to change angle on quote 6/7 Called to talk with salesman 6/13 Called to talk to salesman if not a return call will move on 6/19 Called 7/22 Called to put down her down payment wanted work to be completed by end of September at that time we were 10 weeks out for installs. 8/9 Called for estimate drawing 8/21 Deposit was ran for $1375.00 it wasn't ran on 7/22 due to spelling error we could not find contract asked customer to send a copy of her quote informed us she couldn't find hers it was in the hole which is her husbands office. 10/8 Called for timeline and her install date was 10/18 10/15 Called to cancel install for 10/18 three days before install date and wanted a refund 10/31 Called for her refund at that time we were checking to see if material could be returned at which we were informed it was a special order and could not be returned 11/15 Called again requesting her refund the owner was deciding weather or not to charge a 20 % cancellation charge as stated in the contract 11/20 Customer received a full refund due to the fact their were some errors on timing We here at Fences Unlimited try our very best to make our customers happy and have a good experience but sometimes things happen out of our control and we do apologize for any inconvenience to our customers.
5.0

The staff at Fences Unlimited is amazing and the quality of their work is exceptional. I can't wait to add more fencing to my back yard next year, using this same team.

Thank you for your business and we would be more than happy to service you again in the future
2.0

On July 12, Richard came out to give me an estimate in a timely manner. He seemed professional. The quote was at least 3x what I had been quoted by other places (about $2k for a 10' gate), but since the other places were impossible to get in touch with, I decided to go with **. I was excited by their initial responsiveness. Richard explained that they required a 50% deposit and took down my credit card number. He said that once they ran it through for the deposit, they would shred the document to keep my info safe. Then when the work was done, I could pay the balance however I liked (check, cash, or another card). He guesstimated they could start in 4 weeks, weather permitting. The deposit was charged a few days later. After 4 weeks, I called for a status. It took several phone calls, but finally the admin called and let me know they would be able to give me a DATE in another 4 weeks. I wait another 4 weeks, call back, and they give me a date. On Sept 28th, they came out and installed two posts. I called to ask about some fixes that needed to be done to the concrete work, and to find out when they would be back. Again, this was a few phone calls before I could get a response. I was told they would return on Saturday. They showed up on Saturday, installed the fence and left without a word. No one talked to me to have me inspect the work. I saw that they had left the old cane hole in the concrete and that the privacy fence had a 8" gap in it. Not so private. I texted them on Sunday asking if they could just patch the hole and screw an extra board onto one side to cover up the gap. This would have taken them 10 minutes to do if they had only knocked on the door to talk to me. They knew I was home because I went outside to show them the outlet. After texting them Sunday, I called on Monday to follow up. No response. Tuesday, I saw that they had charged my supposedly shredded credit card for the balance. Incredibly unprofessional not to even touch base with the customer after the job. I called again, this time pretty angry. All my calls go straight to voicemail now so I suppose they blocked my number after they finished the job. The only good thing I can say is that the gate looks sturdy enough. But the lack of communication an unprofessional behavior left a horrible taste in my mouth. I was nothing but reasonable and polite and they couldn't be bothered to talk to me for 3 minutes. I have three more fences to replace and will be going elsewhere.

We contacted Ms [Member Name Removed] on October the 4th in response to her issues with the gates, wood on metal gates have a 3 to 4" gap for latch hardware most customers are ok some would like it smaller which we extended the wood to close the gap and replace the latch and the customer requested to fill old drop rod hole which we filled with concrete . Hopefully this resolves her issues and that she gets years of good service from her gates. Thanks Richard
5.0

I thought things went very well. The salesmen came out and was very reassuring and knowledgeable. The estimate was very similar to two others, but I liked the fact that someone answered the phone when I called. Scheduling took a bit and I was getting antsy. They came in within 2 weeks of their estimated time. The fence looked beautiful and the area around the fence was very neat and clean. This exceeded my expectations.