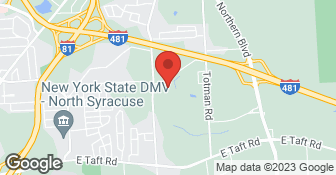 CNY Roof Cleaners is Veteran owned and operated. We focus on providing high quality service and customer satisfaction with every cleaning service. We thrive on integrity, professionalism, and attention to detail. These qualities set us apart from the rest. If you have any questions or would like an exterior cleaning service, please feel free to call us. Thanks! Jeremy -All Roof Cleanings are backed by a 2 Year NO Algae or Moss Guarantee. -US Army Veteran Owned- Proud employer of Military Veterans

I had shingle damage that appeared to be caused by a clogged gutter causing water to back up and flow straight down the side of the chimney. Roman climbed up (about 25 ft) and determined that my gutters were fine but the gutter top Jada hole separating it from the house. Roman sealed up the hole and all around the chimney, all around the bathroom vents, satellite dish, basically anything on the roof, he sealed. I wasn’t charged for gutter cleaning because we didn’t need it. He could have easily told me it was clogged and i would have never known. Roman was great to work with. Great price. I would definitely recommend.

Very efficient and professional from the time of estimate by Jeff to the actual work by the cleaning crew of Gavin, Paul and Clayton. With the moss and other debris removed, the roof looks almost new. Am very pleased and would recommend this company’s services to anyone else.

Gavin did an excellent and thorough job. He was punctual and professional. Great experience overall. Received a call the day I authorized the work and they were here within 4 days. Wish all contractors were this responsive! Will definitely use them again.

I knew my garage roof needed cleaning but I never thought I had moss growing on my house roof. The sun (finally) came out one day while I was looking at my roof. The light hit the roof just at the right spot for me to see that every shingle needed cleaning. I was shocked as I could not see the moss before. Paul did a great job. I plan to ask for him when I need the gutters and house cleaned.

The service was done in timely manner. The follow up was great. The work is professionally done and the cost was reasonable. Would highly recommend to everyone.

Description of Work
I have used CNY Roof Cleaners Service three times so far. First one was for roof cleaning, second one was for Attic cleaning and recently for roof repair.

Paul and Gavin performed an excellent job in trying weather conditions on our four properties. They were professional and courteous. They gave helpful feedback regarding which gutters needed to be replaced and why.

Paul did a fine job checking everything and cleaning up after

Excellent service. Gavin and Paul were friendly and very professional. Would hire again and highly recommend.

It went very well. They came out quickly to see what I wanted done and gave me an estimate. They scheduled service within a day. The person they sent out was very careful and thorough. He worked very carefully and did an excellent job. He even nailed in some loose nails he noticed on a front gutter and retrieved 2 S-hooks that had ended up on the roof.

Jeremy, the owner, has been cleaning my roof for several years. I am totally pleased with his thoroughness, politeness, punctuality and professionalism. My roof and house look great. I live in a highly treed area so roof receives little sun and Jeremy removes mold and discoloration.

Jeremy did an outstanding job. He took the time to describe the work he would do and took his time to do it correctly. He is friendly and very professional. I highly recommend him.

Description of Work
Our roof is surrounded by trees and with the increased rain and lack of sun mold grew over the last year. Each fall, the leaves seem to multiple creating quite a mess. We needed the roof and gutters cleaned before winter.

+++++ Awesome. So happy with everything from start to finish. Great job, people & value.... Trust me .. call them. I only wish I had a before and after picture. Patrick M. Liverpool

Description of Work
Moss from roof.

It went amazing! The guys are great, and respected all of my concerns and requests! Defiantly will be calling again!

Friendly secretary and professional owner!. Works through rain or shine. They not only cleaned the roof but did some preventative maintenance too.

Came on time. Used them before.

Description of Work
Cleaned my roof.

It went great and was very impressed with the work that they did. They even helped us plan ahead for the spring and discuss some future work that needed to get done.

Description of Work
We purchased a new house and realized that the gutters hadn't been cleaned in years. We called CNY Roof Cleaners who were able to come out within a few days and were not only professional but did an amazing job.

Young man came out promptly and gave me an estimate. The price seemed fair and I accepted and the work was scheduled. Before work was done I checked Workers Comp board and for "CNY ROOF CLEANERS INC" of N Syracuse it is shown: "No Workers' Compensation Coverage Exists for this Employer" . Called the estimator and asked that he provide certificate or else he cannot proceed. He said he would check on it and call back. He did not call back nor did the crew show up on the scheduled time.

Description of Work
Responded to flyer left at my mailbox regarding a roof shampoo. Called for an estimate.

They did a nice job and also let me know of some roofing issues that needed attention.

Had an estimate the same day I called and the work was scheduled for a few days later. The CNY Roof Cleaning crew showed up the day they were suppose to, and did a really GREAT job! Entire roof looks like new! Cleaned up the mess on my deck spotlessly, and replaced my deck furniture (they had moved into the yard). Very impressed with the worker's general curtesy and work ethic. Highly recommend this Company!

Description of Work
Heavy moss removal and general roof cleaning, plus back gutters cleaned out. Very steep roofs on both the house and double garage.

Jeremy always does great work. In 2014 he cleaned my shed roof and installed moss/algae inhibitors, and the results continue to look great! He is conveniently responsive by email or phone and was punctual for estimates. For this job, he and his coworker crew did a beautiful job clearing my roof of several feet of snow and ice. I have eave overhang heater cables, and they avoided any damage to the cables and gutters. They were respectful of the property and left the jobsite in clean condition with the snow piles away from my sidewalk and bushes. I will definitely use them again.

Thank you so much [Member Name Removed] for supporting our Company! We are glad to have helped service you with your needs! As always please contact us if there is anything we can do for you!
5.0

Thank you [Removed Member Name] for your review! We were glad to have helped you with your services needed. If there is anything else you need don't hesitate to call!
5.0

Contacted company via e-mail and received a call back that same day. Scheduled an estimate on a Friday and had work completed the following Monday. They did a great job, price was very reasonable and I would highly recommend this company.

Description of Work
Cleaned algea and black steaks off my roof and cleaned gutters/downspouts.

Thank you very much for supporting our business. And we are so glad that you are satisfied! If there is anything further we can help you with, give us a call!

CNY PowerWashing is committed to excellence in every aspect of our business. We uphold a standard of integrity bound by fairness, honesty, and personal responsibility. Our distinction is the quality of service we bring to our customers. Accurate knowledge of our trade combined with ability is what makes us true professionals. Above all, we are watchful of our customers' interests and make their concerns the basis of our business. We use only top of line equipment and products. Working with just about any surface no job it too big or too small for CNY PowerWashing!  …

I specialize in power washing sidewalks, driveways, decks, and house siding. I also clean gutters, removing all debris that build up in them. I am an army veteran so I support the military with military discounts. Estimates vary depending on size and how much you want cleaned. For additional information, please reach me anytime at 315-506-8157  …

Our company is based on the belief that our customers' needs are of the utmost importance. Our entire team is committed to meeting those needs. As a result, a high percentage of our business is from repeat customers and referrals. We would welcome the opportunity to earn your trust and deliver you the best service in the industry. At Emerald City Window Cleaning we are focused on providing quality services with the highest levels of customer satisfaction – we will do everything we can to meet your expectations. With a variety of offerings to choose from, we’re sure you’ll be happy working with us. We offer window cleaning, gutter cleaning, gutter brightening, vinyl siding washing, and solar panel cleaning services. We are a firefighter, family, and locally owned, Syracuse based company. You can always trust that you'll get a professional, experienced, and friendly person when you call us.  …

CNY Roof Cleaners is currently rated 4.9 overall out of 5.

No, CNY Roof Cleaners does not offer a senior discount.

Are there any services CNY Roof Cleaners does not offer?