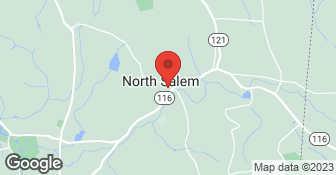 Welcome to Moria Drywall. We have been proudly serving Westchester and surrounding areas for 30 years. We pride ourselves on our work and decades of satisfied customers. Moria Drywall is owner/operated and we run one crew at a time. Our owner, Bob Herzberg, will be on every project to see it through. This allows us more of a personal touch and guaranteed customer satisfaction. Call us today! We look forward to working with you on your next project!...

Our 35 year old kitchen was badly in need of sheetrock repair on the walls and ceiling for popped nails and dried out tape that was peeling. In addition the ceiling had an outdated popcorn finish. The walls hadn't been painted in about ten years either. Bob Herzberg repaired all the spots that needed attention first. Then he applied a skim coat of compound to the ceiling to make it smooth. After sanding was complete he applied primer tinted to match the paint color we had chosen. He finished everything with a final coat of paint. The room looks brand new thanks to Bob's advice on paint color. His craftsmanship in all phases of the job was superb.

My father always told me “Nothing good is cheap and nothing cheap is good!l the latter applies to the job done by Moria Drywall. He came in with the lowest bid and I took it, which I now regret. In no way will you get paint ready walls, you will definitely have to sand most of not all the spackle and in some cases add another coat. The best I can say for the next person hiring them is don’t pay the final installment until you had a couple of days to look over the work and if satisfied then let them come back and get the final payment. I would use them on a rental property but not my own home.

Description of Work
Installed drywall, tape and 3 coats of spackle for 3 rooms.

Very satisfied with Moria Drywall. Bob gave a fair estimate, arrived promptly every day and cleaned up afterwards. The job required a skilled craftsman and he demonstrated a high level of expertise. I would definitely use him again.

This project went very well. I had small section of water damaged drywall in the ceiling replaced, mudded, and primed. I already have a larger project on deck and hope Moira/Bob will be available to assist!

This project went exceptionally well. Mr. Moria was responsive to all out questions. Was respectful and a pleasure to have compete our project. This is the second time we used Moria Drywall. We will definitely use him again. The quality of his work is that of a fine craftsman. Everything was made to be "perfect". Not many contractors have such a work ethic. Strongly recommend. In summary, great experience. Cost was reasonable and well worth it.

Absolutely first-rate. Bob and his team are professional, quick, trust-worthy and know what they are doing. Before I found Moria and Bob, I had another drywall company that was HORRIBLE . What a relief to find Moria Drywall and have the rest of the spaces done RIGHT. I had some difficult spaces with vaulted ceilings and turns that had to be done and the old house has uneven walls. He was able to spot the trouble and make them look first-rate. He even did a great job removing old and dated decorative plaster on walls and smoothing them out and repairing them.

Description of Work
large amounts of drywall in renovated areas

Bob is a very seasoned professional, and took pride in his work. We were very impressed with his punctuality, the quality of the work, and the ability to keep the whole job site clean. I would thoroughly recommend him, and will be passing on his name to friends and family.

perfect. Bob was very professional he did the job right away very neat and finished sooner then expected. i am a plumbing and heating contractor and after meeting bob and seeing his work in my daughters house, this is the guy you want to work in your house .

It went very well. I had a few estimates, I felt most comfortable with Robert. Robert looked at the project and pointed out issues that other contractors did not. I was more than satisfied with the completed job. A job well done!

The work was excellent. Highly recommend

Provider was exceptionally professional in every aspect of the job. Most of all, his finished product made the walls look like nothing ever happened to them!! He was punctual and most of all very clean. I would most highly recommend him to anyone who needs drywall work.

Description of Work
I was introduced to Bob with MORIA DRYWALL though my general contractor, Joe Constantino, RoSal Enterprises. Bob is the best I have ever seen. He shows up consistently on time, is pleasant and professional, and works very hard. More important, his work is absolutely excellent. He worked on drywall, 100-year-old plaster, and specialized plaster walls that required texturing. He was able to make some terrible walls perfectly smooth and enhanced the value of the house in a significant way . I recommend him without any reservation. His work is simply outstanding.

Description of Work
Bob taped and compound the walls and ceiling in our family room. He then put a coat of primer on those surfaces. The job went well we worked around each other schedules and he did a very professional job.

Beautiful work, showed up several times to make sure we got the details right, accommodated some schedule changes due to electric issues I had in the house. Very happy, kitchen looks great. Can't compare the price because Bob did all the other plaster work in the house about 7 years ago (for the previous owner) and I really liked the quality. Did not shop around.

Description of Work
Plaster in the kitchen.

Great job, better than hoped. Though it was a few years ago, we wanted to write a review as we were very happy with Bob and his team

I met with Bob and thoroughly discussed all the details of the drywall job that needed to be done. I had a couple of custom requests as we needed two layers of 5/8" drywall in one area for soundproofing and water-resistant special gypsum panels in another area. A couple weeks later, he showed up at 8:00 AM as planned and started getting organized with his helper. At 8:45 AM he left saying that he had a bad feeling and that, actually, he wasn't going to do the job. I could not believe it. Asking him about his change of heart, I understood that he thought he under-bid the job (he was not the lowest bid, however). Simply put: an incredible lack of professionalism.

Description of Work
Bob was supposed to install drywall in my master bath and part of my basement.

Bob was very attentive to our house, covering the floors with both paper and drop cloths. He also used drop cloths on the doors not being scraped as the dust was quite pervasive. This helped a lot with keeping the dust down. Luckily, the house was empty so he had some extra time to complete the project. He was on time and prompt to return phone calls. He was very flexible when our budget only allowed the project to be done if we scaled down the number of rooms. We probably did 75% of the original estimate. My only complaint is that he was a little reluctant to take the garbage away at the end. I figure for $2700, we should not have to dispose of all his garbage, too.

Description of Work
Scrape and skim coat ceilings in several rooms, upstairs hallway, and stairwell. Ceilings had popcorn coating and we wanted the surface flattened.

REMC has been specializing in all types of remodeling work since 2009. We takes pride in each job and make sure our customers are completely satisfied. Call today for your free estimate.  …

A family owned business since 1963. Proudly serving Dutchess County and the surrounding area’s. We offer quality service at an affordable price. Contact us today about an estimate!  …

J & S Painting Plus, a family owned and operated business for over 30 years, has provided excellent quality interior and exterior residential painting, as well as, commercial painting services. As an expert painting contractor J & S distinguishes itself from the competition by providing clients with the highest standards in customer service while remaining true to its values as a family owned and operated business. Unlike other painting contractors, we offer quality service delivered with reliability and integrity. Additional Phone Number: (866) 489-3802. Free Estimates and plenty of references!  …

All statements concerning insurance, licenses, and bonds are informational only, and are self-reported. Since insurance, licenses and bonds can expire and can be cancelled, homeowners should always check such information for themselves.To find more licensing information for your state, visit our Find Licensing Requirements page.
General Information
Free Estimates
No
Eco-Friendly Accreditations
No
Senior Discount
No
Warranties
No

How is MORIA DRYWALL overall rated?

MORIA DRYWALL is currently rated 4.6 overall out of 5.

No, MORIA DRYWALL does not offer free project estimates.

No, MORIA DRYWALL does not offer eco-friendly accreditations.

No, MORIA DRYWALL does not offer a senior discount.

Are warranties offered by MORIA DRYWALL?

No, MORIA DRYWALL does not offer warranties.

What services does MORIA DRYWALL offer?

Are there any services MORIA DRYWALL does not offer?